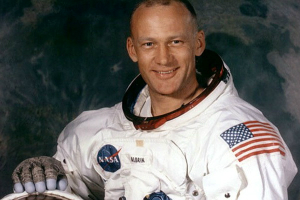 After joining NASA, Slayton was selected to pilot the second U.S. manned orbital spaceflight, but was grounded in 1962 by a heart murmur. He then served as NASA's director of flight crew operations, making him responsible for crew assignments at NASA from November 1963 until March 1972. At that time he was granted medical clearance to fly, and was assigned as the docking module pilot of the 1975 Apollo–Soyuz Test Project, becoming the oldest person to fly in space at age 51. This record was surpassed in 1983 by 53 year old John Young and in 1998 by his fellow Project Mercury astronaut John Glenn, who at the age of 77 flew on Space Shuttle mission STS-95.

Slayton was born on a farm near Sparta, Wisconsin. A childhood farm equipment accident left him with a severed left ring finger. He attended elementary school in Leon, Wisconsin and graduated from Sparta High School.

After the war, Slayton earned a Bachelor of Science degree in Aeronautical engineering from the University of Minnesota, in 1949.

Slayton became a test pilot at Edwards Air Force Base in California. He tested supersonic Air Force fighters, including the F-101, F-102, F-105, and F-106, and was responsible for determining stall-spin characteristics for the large F-105, which became the principal fighter bomber used by the USAF over North Vietnam.

Slayton was chosen as one of the original seven American astronauts in 1959. He was scheduled to fly in 1962 on the second orbital flight (to have been named Delta 7, the name coming from the mission being the fourth spaceflight—the fourth letter in the Greek alphabet and the seven astronauts), but because of an erratic heart rate (idiopathic atrial fibrillation), he was grounded in September 1962, and his place was taken by Scott Carpenter aboard Aurora 7. Slayton was the only member of the Mercury Seven who did not fly in the Mercury program. He was one of the eight Paresev pilots.

When NASA grounded Slayton, the Air Force followed suit. Slayton resigned his Air Force commission in 1963 and worked for NASA in a civilian capacity as head of astronaut selection. Unofficially called "chief astronaut," he had the decisive role in choosing the crews for the Gemini and Apollo programs, including the decision of who would be the first person on the Moon.

A long medical program led to Slayton being restored to full flight status in 1972, when he was selected as docking module pilot for the Apollo–Soyuz Test Project, a docking between the American Apollo spacecraft and the Soyuz spacecraft of the Soviet Union. On July 17, 1975, the two craft joined up in orbit, and astronauts Slayton, Thomas Stafford and Vance D. Brand conducted crew transfers with cosmonauts Alexey Leonov and Valeri Kubasov. At the end of the flight, an erroneous switch setting led to the introduction of noxious fumes into the Apollo cabin during landing, and the crew was hospitalized as a precaution in Honolulu, Hawaii, for two weeks. During hospitalization, a lesion was discovered on Slayton's lung and removed. It was determined to be benign.

After the Apollo–Soyuz flight, he became head of the Approach and Landing Tests for NASA's space shuttle program.

Slayton retired from NASA in 1982. After retirement, he served as president of Space Services Inc., a Houston-based company earlier founded to develop rockets for small commercial payloads. He served as mission director for a rocket called the Conestoga, which was successfully launched on September 9, 1982, and was the world's first privately funded rocket to reach space. Slayton also became interested in aviation racing.

Slayton penned an autobiography with space historian Michael Cassutt entitled Deke!: U.S. Manned Space from Mercury to the Shuttle. As well as Slayton's own astronaut experiences, the book describes how Slayton made crew choice selections, including choosing the first person to walk on the Moon. Numerous astronauts have noted that only when reading this book did they learn why they had been selected for certain flights decades earlier.

Slayton's name also appears with three other co-authors, including fellow astronaut Alan Shepard, on the book Moon Shot: The Inside Story of America's Race to the Moon, published in 1994. The book was also made into a documentary film of the same name. Slayton died before either Moon Shot project was finished or released, and the book did not receive any input from him. However, the film was narrated from Slayton's point of view (voiced by Barry Corbin) and includes a brief tribute to him at the very end.

Slayton was a friend of fellow astronaut Gus Grissom. He married Marjorie "Marge" Lunney in 1955, and they had one son, Kent Sherman. They eventually divorced, and Slayton later married Bobbie Belle Jones (1945–2010). They remained married until his death.

Shortly after he moved to League City, Texas, in 1992, Slayton was diagnosed with a malignant brain tumor. He died from the illness on June 13, 1993.