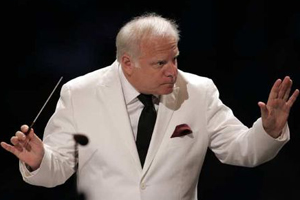 American conductor who has led the Minnesota Orchestra, the Chicago Symphony, the New York Philharmonic (1977-1979), the New Orleans Symphony, the St. Louis Symphony (since 1979), played at Carnegie and as a guest with the Dallas Symphony. Though unprepossessing in person, he soon emerged as the most promising new American-born conductor since Bernstein. On occasion he stars as a guest pianist. He became music director-designate of the National Symphony Orchestra in 1994.

Slatkin was the first of two sons of noted musician Felix Slatkin, concertmaster of the 20th Century Fox studio orchestra, and Eleanor Aller Slatkin, cellist in the Warner Brothers Orchestra. He grew up in a household where guests included celebrated composers such as Igor Stravinsky and Hollywood superstars such as Frank Sinatra.

Young Leonard began playing the violin at the age of three, started taking piano lessons at age 12, and studied viola at 14. He quit the violin, most likely because of competition feelings with his father.

As a teenager, Slatkin focused on composition, piano and viola, and by the time he was 14, was studying composition with Mario Castelnuovo-Tedesco, a successful Hollywood film composer. By age 15, he was playing cocktail piano at a Los Angeles bar. He had his first opportunity to conduct at age 17 while playing viola in the California Youth Symphony. The conductor was called away to a telephone call at a rehearsal and he tossed the score at Slatkin, saying, "You look like you want to conduct: Conduct it."

In 1962, Slatkin left Los Angeles to study at the University of Indiana at Bloomington, known for its music faculty. But he wouldn’t take compulsory R.O.T.C. training based on pacifist convictions, cut his time there to one semester, and enrolled in Los Angeles City College in January 1963 intending to major in English. One month later, his father died of a heart attack, which had a profound effect on his life, since he felt he could then consider conducting as a career.

At age 19, while attending the music camp at Aspen, Colorado, he made his official debut as a conductor. He was encouraged by American conductor Walter Susskind to enroll at the Juilliard School in New York City, which he did from 1964 to 1968. He made his Carnegie Hall debut conducting the Youth Symphony Orchestra of New York.

After Slatkin graduated from Juilliard, Susskind, by then musical director of the St. Louis Symphony, invited Slatkin to become his assistant. Slatkin presided over the orchestra’s Sunday afternoon concert series, appearing occasionally as a piano soloist. He advanced to associate conductor, associate principal conductor, and principal guest conductor of the Symphony. In 1977, he accepted the post of music director of the New Orleans Philharmonic, and served as guest conductor with the Dallas Symphony and with the Minnesota Orchestra. His tenure with the New Orleans Symphony lasted only from 1977 to 1978, coinciding with a chronic financial crisis for that orchestra.

In January 1974 Slatkin made his first appearances with both the Chicago Symphony and the New York Philharmonic. He appeared with the Philadelphia Orchestra, and made his debut with the Royal Philharmonic Orchestra in London (also in 1974). He later conducted all of the major London orchestras, the Concertgebouw in Amsterdam and the Berlin Philharmonic.

In 1979, Slatkin became the first American-born music director of the St. Louis Symphony. In the early 1980s he began to work more extensively in Europe. He became music director-designate of the National Symphony Orchestra in 1994. Recording a great deal of contemporary music, he best known as a generalist who prefers Russian to German repertory, and shows a marked interest in Rachmaninoff.

His first marriage was to Beth Gootee, a language teacher. His second wife was Jerilyn Cohen, a lawyer, from whom he is also divorced. Both marriages were short-term, less than two years.