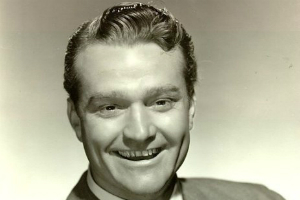 American film, nightclub and Emmy-award-winning TV comedian, world-known and loved. With his trademark red hair and his characters who poked gentle fun at the foibles of man, he made TV audiences howl from 1951-1971 as Clem Kadiddlehopper, the Mean Widdle Kid and Freddie the Freeloader. He traditionally ended every show with "Good night and may God bless." In 1951 he received the TV Emmy as best comedian. Five years later he was nominated for an Emmy as the actor in "The Big Slide."

Skelton was the youngest of four sons of a circus clown who died two months before he was born. Left destitute, his mom worked as a cleaning woman. Skelton--nicknamed 'Red' by his brothers, began selling newspapers at age seven. He dropped out of school at 14 to entertain in a traveling minstrel show, making ten dollars a week.

After working as a minstrel man on a showboat that cruised the Ohio and Missouri rivers, and as a clown with his late father's circus, he turned to burlesque in the late '20s. In 1930, at age 17, he met Edna Marie Stillwell, a 15-year-old usherette. They were married two years later, and soon she was writing his material and managing his career. His big break came in 1937 on crooner Rudy Vallee's radio show, when his irreverent humor made a hit with the audience.

His manager wife negotiated a $1,500-a-week movie contract for him with MGM in 1938. He eventually did well with the comedy thriller "Whistling in the Dark," 1941. Three years after that, he was in "Bathing Beauty" with Esther Williams. Skelton went on to appear in over 40 movies. CBS offered him his own variety show, which premiered in 1953 and was an instant hit.

By 1971, Skelton had won three Emmys with shows that included his irreverent and hilarious alter ego characters. CBS canceled the show despite high ratings in 1970, saying it wasn't hip with the times. After the TV show cancellation, Skelton hit the stage playing to sold-out audiences well into his 70s with his stock characters.

In 1943, he and Edna divorced amicably and she continued to manage his career and write for him. Two years later, Skelton married model Georgia Davis. In 1947, their daughter Valentina was born, and a son, Richard, followed in 1948. Tragedy occurred in 1958, at the height of Skelton's career, when his son Richard died of leukemia at age nine. Skelton and Georgia divorced in 1973, and that same year, he married his third wife, Lothian Toland, a secretary 25 years his junior. In 1976, Georgia committed suicide on the 18th anniversary of Richard's death.

Skelton sustained a second lucrative career as an author of children's books and an artist of clown paintings that sell for as much as $20,000. He estimated that he earned $2.5 million a year with his lithographs.

He was inducted into the Comedy Hall of Fame in 1993.

He retired to a 1,500 acre ranch in Riverside County, CA. At a frail 84, he still wrote every morning. His third wife of the last 24 years, Lothian, was by then a 59-year-old horse breeder. His daughter Valentina was a bus driver in San Diego. He died at age 84 on 9/17/1997 of pneumonia, 7:48 AM PDT at a hospital in Rancho Mirage, California.