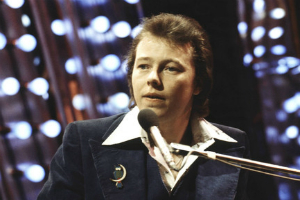 Skellern played the organ at St Michael's Church, Bolton during his early years.

Skellern's first hit song was "You're a Lady" in 1972. The record featured choir-rockers The Congregation, who had recorded the hit "Softly Whispering I Love You" and reached number three in the UK Singles Chart and number 50 in the United States Billboard Hot 100.

He followed this three years later with "Hold On to Love" which reached number 14 in the UK chart. He also sang the theme song to the TV series Billy Liar. For three years in the 1970s he worked on BBC Radio 4's Stop the Week, writing topical songs.

A non-charting song 'Too much I'm in love' also received much radio play.

In 1978 Skellern had a minor hit with the 1930s song "Love is the Sweetest Thing" (which featured backing by the Grimethorpe Colliery Band), winning the Music Trades Association award for best Middle of the Road song. His album Astaire is regarded by many as a minor classic.

In 1981 he wrote, composed and performed in a series of musical playlets for the BBC called Happy Endings. Two years later Skellern hosted the Private Lives television chat show. He wrote the lyrics for the song "One More Kiss, Dear", from the 1982 film, Blade Runner. In 1984, He performed the theme song for the London Weekend Television programme Me and My Girl.

In the same year, Skellern formed a group called Oasis with cellist Julian Lloyd Webber and Mary Hopkin. The group released a self-titled album in 1984 on the Warner Bros. Records label which earned a silver record. The group performed live on television, but a planned concert tour was cancelled when Mary Hopkin became ill.

In 1987, Skellern wrote and performed the theme music and song for the Yorkshire Television series Flying Lady.

Skellern provided the voice of Carter Brandon in the BBC Radio adaptations of Peter Tinniswood's Uncle Mort's North Country. This show was produced by Pete Atkin.

Skellern has collaborated with Richard Stilgoe in cabaret and in musical comedy with comic songs such as "Joyce the Librarian".

They have released three live albums; A Quiet Night Out, By the Wey and Who Plays Wins.

More recently[clarification needed] Skellern has been writing choral music, including "Waiting for the Word" (which was written for the BBC's Songs of Praise programme of 19 August 2001), Six Simple Carols and The Nativity Cantata written for a Hemel Hempstead choir, the Aeolian Singers. The work was first performed by them in 2004 and has since been recorded.

Skellern's and Richard Stilgoe's little-known album, Who Plays Wins, made an unexpected entry in the midweek top five album charts in February 2011 after an online poll among Crystal Palace fans voted it the best British album of all time.

Skellern is married and has with two children.