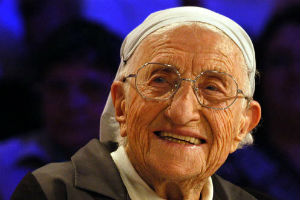 Sœur (Sister) Emmanuelle, N.D.S., (November 16, 1908 – October 20, 2008), was a Religious Sister of both Belgian and French origins, noted for her involvement in working for the plight of the poor in Turkey and Egypt. She was honoured with Egyptian citizenship in 1991.

She was born Madeleine Cinquin in Brussels, Belgium, the daughter of a French father and a Belgian mother. Her parents were wealthy lingerie manufacturers. At the age of six she saw her father drown. She was educated at the Sorbonne, earning a degree in philosophy. In 1929, she professed vows and became a Religious Sister in the Congregation of Our Lady of Sion, dedicated to the conversion of Jews to Christianity.

In the 1930s, Sister Emmanuelle started teaching at the Notre-Dame de Sion High School in Istanbul, where she lived until the 1960s, with teaching assignments by her congregation of several years in Tunis and Alexandria in between.

In 1971, Sister Emmanuelle witnessed the impoverished conditions of the trash collectors in Cairo, Egypt, and decided to live among them. She remained there until 1993, when she returned to France. It was upon her return that she gained the status of a media sensation in France, as she was well received by audiences and talk-show hosts.

In addition to her charity work, she was known for her unorthodox religious views, including her approval of the use of contraception and of the idea of allowing priests to marry. She was voted one of the most popular people in both France and Belgium, and was compared to Mother Teresa, although she herself regarded the comparison as "ridiculous". In 2003, a French television station broadcast the documentary, Soeur Emmanuelle: An Exceptional Woman. In 2005 she ended in fifth place in the Walloon version of Le plus grand Belge (The Greatest Belgian).

Sister Emmanuelle died on October 20, 2008, in Callian, Var, in France.  She died in her sleep from natural causes at the age of 99, less than four weeks from celebrating her 100th birthday.

Les Amis de Soeur Emmanuelle (The Friends of Sister Emmanuelle) is a charitable organization based in Brussels.