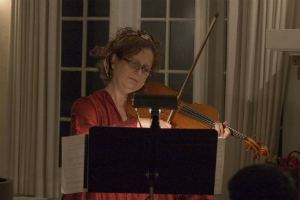 American musician, violin and violist with international orchestras. She began violin at eight, in September 1959, and viola at 17 in college. Graduating with a Bachelors in music May 1975, she attended graduate school for two years. After teaching briefly, she decided she did not like it. In July 1976, she moved to California where she played with a quartet.

On 8/20/1978, Sippel auditioned for the Mexico City Orchestra. Accepted, she moved to Mexico to perform for the next four years. In October 1982, she moved to Italy to play with the Florence orchestra and on 9/01/1983 she joined the orchestra at La Fenice in Venice. She became the assistant principal in the Venice Opera House Orchestra as well as doing some recitals.

Returning to the U.S. on 2/06/1991, she played at private functions and in small ensembles until she took an engagement with a chamber music group at a resort in Japan, leaving for the Orient on 6/02/1993.

With an interest from the time of her youth, Sippel studied astrology from the spring of 1990. When she returned from Japan in 1994, she worked for the astrological and tarot phone lines for 14 months on the side while playing privately.

In late 1997, orchestral and studio work began to pick up and she was delighted to play under the baton of Placido Domingo at the Los Angeles Music Center as well as playing backup for Liza Minnelli for a TV special.