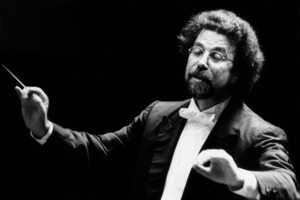 Italian musician, a composer and conductor. An imposing figure while conducting with his bushy hair and beard, sweeping gestures and an intense gaze framed by wire-rimmed glasses, Sinopoli seemed bigger-than-life. His orchestral selections were usually as vigorous as his temperament, emphasizing the allegros as well as brass and percussions.

Giuseppe began his musical studies when he was 12 and continued them at the Venice Conservatory while also, at his father's behest, studying medicine at the University of Padua. His interest and study in philosophy continued for his lifetime, and he completed a degree in archaeology, with Egyptology as his specialty, at Rome University in 2001. He was to have been awarded his diploma in April.

Prior to his musical career, Sinopoli had written on psychoanalysis and anthropology during his student years, and earned a medical degree. In 1990, he said in an interview, "If you speak about spirituality, nobody understands, but when I speak about the psychological, I don't mean it in the modern sense of scientific, clinical psychology, but in the very, very old meaning of the word - that is, to speak about the soul, the spirit. I don't conduct music that is not a manifestation of the existential and spiritual problems of life."

When he completed his medical studies in the early 1970s, Sinopoli turned down offers for hospital staff jobs and returned to his musical life. He studied conducting with Hans Swarowsky in Vienna and composition with Bruno Maderna and Franco Donatoni in Darmstadt, Germany. He joined the composition faculty of the Venice Conservatory in 1972, and in 1975 he founded the Bruno Maderna Ensemble, a contemporary music group.

In 1978, his first composition was performed in New York, "Souvenirs à la mémoire." He made his debut with the New York Philharmonic, leading the Mahler Sixth, in October 1982. Over the next several years Mr. Sinopoli was a regular presence on the Philharmonic podium, and he made a handful of recordings for Deutsche Gramophone. He made his Metropolitan Opera debut in 1985, the Deutsche Opera, Berlin and at the Vienna State Opera, both in 1980, and Covent Garden in 1983, a production that was televised in the United States on New Year's Eve in 1984. He also conducted frequently at the Salzburg Festival and in Japan.

While conducting "Aida" in Berlin on 4/20/2001 around 10:00 PM, Sinopoli had a heart attack; he was declared dead at 11:40 PM. It had been ten years since he had last conducted at Deutsche Opera Berlin and a large party had been planning in his honor for after the performance. Mr. Sinopoli is survived by his wife, Silvia Capellini, two sons, Giovanni and Marco, and several brothers and sisters.