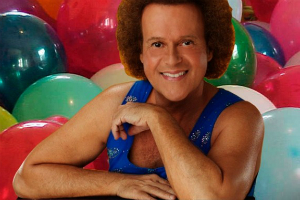 Milton T. Simmons (born July 12, 1948), known professionally as Richard Simmons, is an American fitness personality and actor. Simmons promotes weight-loss programs, prominently through his Sweatin' to the Oldies line of aerobics videos and is known for his eccentric, outgoing and frequently flamboyant personality.

Simmons began his weight-loss career by opening a gym called Slimmons in Beverly Hills, California, catering to the overweight, and he became widely known through exposure on television and through the popularity of his consumer products. He is often parodied and is a frequent guest of late night television talk shows, such as the Late Show with David Letterman. Simmons continues to promote health and has broadened his activities to include political activism, notably in support of a bill mandating non-competitive physical education in public schools as a part of the "No Child Left Behind" Act.

Simmons was born in New Orleans, Louisiana, the son of Shirley May (née Satin) and Leonard Douglas Simmons, Sr. Simmons was born to show business parents and raised in the French Quarter of New Orleans. His father was Episcopalian and his mother Jewish; Simmons later converted to Catholicism and attended Cor Jesu High School known today as Brother Martin High School. He was obese throughout his adolescence and by the time he graduated from high school, he weighed 268 pounds. As a young man, he considered being a priest. In an interview with the Tampa Bay Times, Simmons explained he adopted the name "Richard" after an uncle who paid for his college tuition.

His first job in New Orleans was selling pralines at Leah's. After starting college at the University of Southwestern Louisiana, he transferred to Florida State University. While enrolled there, he studied as an exchange student in Florence, Italy. He graduated with a BA in Art. After graduation, Simmons moved to New York City where he worked in advertising, as a waiter, and for cosmetics companies Revlon and Coty Cosmetics.

Simmons had an uncredited appearance in Fellini Satyricon which was released in 1969 showing him as obese.

Upon moving to Los Angeles, California, in the 1970s, Simmons worked as the Maître d'hotel at Derek's, a restaurant in Beverly Hills. He developed an interest in fitness, but was dissatisfied with the unhealthy fad diet methods and the established gyms and exercise studios of the day which favored the already fit customer. It was his interest in fitness that helped him lose 123 lb (56 kg).

Simmons later opened his own exercise studio, originally called The Anatomy Asylum, where emphasis was placed on healthy eating in proper portions and enjoyable exercise in a supportive atmosphere. The business originally included a salad bar restaurant called "Ruffage," the name a pun on the word roughage (dietary fiber), though it was eventually removed as the focus of the Asylum shifted solely to exercise. Now called Slimmons, the establishment continues operations in Beverly Hills, and Simmons teaches motivational classes and aerobics throughout the week.

On February 16, 2010, Simmons stated on The Dr. Oz Show that he has kept off his own 100+ pound weight loss for 42 years, has been helping others lose weight for 35 years, and that in the course of his fitness career has helped humanity lose approximately 12,000,000 pounds. Simmons now uses the web as a method of outreach by running his own membership based website, and also indicates on his home page that he has established official pages on numerous social networking sites such as Facebook, Twitter, MySpace, and YouTube.

Simmons began to draw media attention due to the success of his health club that began with him on the television show Real People where he was shown at work. He introduced customers whom he had helped to lose weight. He later made guest roles on the celebrity game shows: Battlestars, Body Language, Super Password, the ABC version of Match Game, the syndicated version of Hollywood Squares, Win, Lose or Draw and Nickelodeon's Figure It Out.

Positive viewer reaction landed Simmons a recurring role as himself on the American soap opera General Hospital, over a four-year period. This in turn led to further media notoriety, as well as being in shopping malls, where he taught exercise classes. In the early 1980s, Simmons hosted two shows; Slim Cookin, and an Emmy Award-winning talk show, The Richard Simmons Show, in which he focused on personal health, fitness, exercise, and healthy cooking. "The Richard Simmons Show" drew thousands of exercise enthusiasts including SAG/AFTRA actress Lucrecia Sarita Russo who reportedly transported an entire bus filled with ladies from Pam's Figure Tique, for a lively workout on the show.

Simmons has been featured as himself on numerous TV shows, including Whose Line Is It Anyway?, CHiPs, Saturday Night Live, The Larry Sanders Show and on an episode of Arrested Development, "Bringing Up Buster". In 1999, he hosted a short lived TV show called DreamMaker. Eight years later he filmed a pledge drive special for PBS, called Love Yourself and Win.

Simmons has been featured in TV advertisements for Sprint, Yoplait, Herbal Essence Shampoos,and toward the end of 2007, he was in a "This is SportsCenter" commercial on ESPN as the show's "conditioning coach." In Canada, Simmons was in an advertisement for Simmons mattresses. The mattress company hired the exercise celebrity because of the similarity in name, and for his appeal to the company's target audience of women over 35. Beyond this, there is no further business partnership between the two.

For three years, he hosted a radio show on Sirius Stars, Sirius Satellite Radio channel 102, called Lighten Up with Richard Simmons. The show is no longer in production.

Simmons was a guest on Rosie O'Donnell Show November 18, 1997 together with Celine Dion.

Simmons was a frequent guest on The Howard Stern Show in the 1990s. While he resolved at one point to refuse future involvement after Stern insulted him one too many times, he finally was on Stern's show on November 16, 2006, then returned again January 24, 2012.

Simmons was also a frequent guest on Late Night with David Letterman (NBC) and the Late Show with David Letterman (CBS). On November 22, 2000, they had a falling out after an incident that occurred on that night's show. Simmons (while dressed as a turkey) was sprayed in the face by Letterman with a fire extinguisher after Simmons grabbed Letterman as if to hug or kiss him, causing Simmons to have a severe asthma attack. Simmons did not attend the Letterman show for six years, finally returning on November 29, 2006. During that time, Letterman once again set Simmons up for a prank. While Richard Simmons was demonstrating a steamer branded with his name, Letterman insisted on placing a tray under the steamer which Simmons did not believe belonged there. When Simmons turned the steamer on, something in the tray exploded and caught fire, sending Simmons running for his life. Despite the scare, Simmons took the incident in fairly good nature, even joking that he "felt like Michael Jackson" (referring to a mishap where Jackson's hair was set on fire by a pyrotechnics accident).

Simmons was a guest on the U.S. version of Whose Line Is It Anyway?

Simmons is on tracks 1 and 10 of Bob Rivers's 1997 holiday album More Twisted Christmas.

Simmons has multiple times been on The Glenn Beck Program on HLN.

Simmons is featured heavily in the film clip of 'Hawker Boat' by Tobacco, taken from the album Fucked Up Friends.

Simmons provides the voice for Coach Salmons, a reoccurring character modeled after his own likeness, for Disney Channel's animated television series Fish Hooks, a Disney Channel Original Series that premiered on September 24, 2010. On December 8, 2010, it was announced that the show has been picked up for a second season.

In 2011, Simmons starred in "Fit to Fly with Richard Simmons", an Air New Zealand inflight safety briefing video modeled after his aerobic workouts.

In 2012, he was in a Canadian commercial for Telus wireless phone.

In 2013, he appeared on Extreme Weight Loss as a surprise guest, leading a workout with the contestant.

Simmons is noted for his flamboyant, high-energy, motivational demeanor; an attribute he uses to help encourage people to lose weight. His high energy level is always featured in his workout videos. His trademark attire is candy-striped Dolfin shorts and tank tops decorated with Swarovski crystals.

Simmons is known for interacting at a personal level with people using his products. This began by personally answering fan mail he received as a cast member of General Hospital. Simmons still personally answers emails and letters, and makes hundreds of phone calls each week to those who seek his help. He also talked to people on the air during his radio show, and holds weekly live chats in the "clubhouse" area of his website. His appearances also include a "meet and greet" time, so that people can speak to him one on one.

In September 2005, Simmons was on Entertainment Tonight to discuss the effects of Hurricane Katrina on his family in his hometown of New Orleans, Louisiana, and his involvement in aiding those affected by the hurricane. On August 29, 2006, Simmons was on Your World with Neil Cavuto while making a return visit to New Orleans one year after the flooding, a visit he repeated on March 2, 2007, now talking about his recent trip to Washington, D.C. to promote and raise awareness about The Strengthening Physical Education Act of 2007 (bill HR 1224).