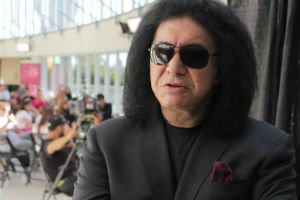 Gene Simmons (born Chaim Witz; August 25, 1949) is an Israeli-born American rock bass guitarist, singer-songwriter, record producer, entrepreneur, and actor. Known by his stage persona The Demon, he is the bass guitarist/co-lead vocalist of Kiss, a hard rock band he co-founded in the early 1970s. With Kiss, Simmons has sold more than 100 million albums worldwide.

Chaim Witz was born at the Rambam Hospital in Haifa, Israel, in 1949. With his mother, he emigrated to Jackson Heights, Queens, in New York City, at the age of eight, speaking no English. His mother Flóra "Florence" Klein (formerly Kovács) was born in Jánd, Hungary. The name Klein, which means "small" in German, is sometimes used informally in Hungarian as Kis; this however, did not give the band its name. Florence and her brother, Larry Klein, were the only members of the family to survive the Holocaust. Simmons' father, Feri Witz, also Hungarian-born, remained in Israel, where he had one other son and three daughters. Simmons says the family was "dirt poor", scraping by on bread and milk. In the United States, Simmons changed his name to Eugene Klein (later Gene Klein), adopting his mother's maiden name. He was a part of Yeshiva Torah Vodaas in Williamsburg, Brooklyn as a child, from 7:00 am to 9:30 pm.

Before his musical career began, Simmons worked a variety of jobs in the New York City area. An "excellent typist", he served as an assistant to an editor of fashion magazine Vogue and also spent several months as a sixth-grade instructor on the Upper West Side.

Simmons became involved with his first band, Lynx, then renamed The Missing Links, when he was a teenager. He adopted the stage name Gene Simmons, after rockabilly performer Jumpin' Gene Simmons. Eventually, he disbanded the band to form The Long Island Sounds, the name being a pun on the Long Island Sound. While he played in these bands, he kept up odd jobs on the side to make more money, including trading used comic books. Simmons attended Sullivan County Community College in Loch Sheldrake, New York. He then joined a new band, Bullfrog Bheer, and the band recorded a demo, "Leeta"; this was later included on the Kiss box set.

Simmons formed the rock band Wicked Lester in the early 1970s with Stanley Harvey Eisen (now known as Paul Stanley) and recorded one album, which was never released. Dissatisfied with Wicked Lester's sound and look, Simmons and Stanley attempted to fire their band members; they were met with resistance, and they quit Wicked Lester, walking away from their record deal with Epic Records. They decided to form the ultimate rock band, and started looking for a drummer. Simmons and Stanley found an ad placed by Peter Criscoula, known as Peter Criss, who was playing clubs in Brooklyn at the time; they joined and started out as a trio. Paul Frehley, better known as Ace Frehley, responded to an ad they put in The Village Voice for a lead guitar player, and soon joined them. Kiss released their self-titled debut album in February 1974. Stanley took on the role of lead performer on stage, while Simmons became the driving force behind what became an extensive Kiss merchandising franchise. The eye section of his "Demon" makeup with KISS came from the wing design of comic book character Black Bolt.

In 1983, while Kiss' fame was waning, the members took off their trademark make-up and enjoyed a resurgence in popularity that continued into the 1990s. At this time, Peter Criss, the original drummer, had decided to leave the band, and a replacement was sought to fill the drummer's vacancy. The new drummer was Paul Charles Caravello, who went by the stage name of Eric Carr, and played for KISS from 1980 until his early death at the age of 41 in 1991. The band hosted its own fan conventions in 1995, and fan feedback about the original Kiss members reunion influenced the highly successful 1996–1997 Alive Worldwide reunion tour. In 1998, the band released Psycho Circus. Since then, the original line-up has once again dissolved, with Tommy Thayer replacing Ace Frehley on lead guitar and Eric Singer (who performed with Kiss from 1992 through 1996) replacing Peter Criss on drums.

During an interview in 1999, Simmons was asked about the source and significance of Kiss' stage makeup and personas:

I've always been a fan of Americana, and Americana has always been about imagery, often above content. I think there's nothing wrong with that. The world worships this culture. Most people only think about America in terms of rock & roll, movies and television. Kiss is very all-American, in the sense that our constituency has never had anything in common with critics... because our power, our lifeblood, our very reason for existence is our fans. Without them, we'd be nothing.

Simmons was a supporter of the foreign policy of the George W. Bush administration. He supported the 2003 invasion of Iraq, writing on his website: "I'm ashamed to be surrounded by people calling themselves liberal who are, in my opinion, spitting on the graves of brave American soldiers who gave their life to fight a war that wasn't theirs...in a country they've never been to... simply to liberate the people therein". In a follow-up, Simmons explained his position and wrote about his love and support for the United States: "I wasn't born here. But I have a love for this country and its people that knows no bounds. I will forever be grateful to America for going into World War II, when it had nothing to gain, in a country that was far away... and rescued my mother from the Nazi German concentration camps. She is alive and I am alive because of America. And, if you have a problem with America, you have a problem with me."

During the 2006 Lebanon War between Israel and Lebanon, Simmons sent a televised message of support (in both English and Hebrew) to an Israeli soldier seriously wounded in fighting in Lebanon, calling him his "hero."

In 2010, Simmons said he regretted voting for Barack Obama and criticized the 2009 health care reforms. Following Obama's 2011 Mideast speech, in which the President called on Israel and the Palestinians to negotiate a settlement "based on the 1967 lines with mutually agreed swaps," Simmons told CNBC that Obama was gravely misguided. "If you have never been to the moon, you can't issue policy about the moon. For the president to be sitting in Washington D.C. and saying, 'Go back to your '67 borders in Israel' – how about you live there and try to defend an indefensible border – nine miles wide?" Simmons also accused the United Nations of being "the most pathetic body on the face of the earth."

During his visit to Israel in 2011, he stated that the artists refusing to perform in Israel for political reasons are "stupid," referring to artists who canceled planned concerts in Israel.

In an April 2012 interview, Simmons endorsed Republican Mitt Romney for President, stating as well that "America should be in business and it should be run by a businessman."

Simmons is a science-fiction and comic book fan and published several science fiction fanzines, among them Id, Cosmos (which eventually merged with Stilletto to become Cosmos-Stilletto and then Faun), Tinderbox, Sci-Fi Showcase, Mantis and Adventure. He also contributed to other fanzines, among them BeABohema and Sirruish.

Simmons lives in Beverly Hills, California, with Canadian former Playboy Playmate and actress Shannon Tweed whom he had dated for 28 years. He often joked that he and Tweed were "happily unmarried" for over 20 years (1975). He often stated, "Marriage is an institution, and I don't want to live in an institution." Simmons and Tweed finally wed on October 1, 2011, at the historic Beverly Hills Hotel in Beverly Hills, California. They have two children: a son, Nick (born January 22, 1989), and a daughter, Sophie (born July 7, 1992). He formerly had live-in relationships with Cher and Diana Ross. Simmons can speak Hungarian, German, English, and Hebrew.

In March 2011, Simmons visited his birth place, Israel. He described the trip as a "life changing experience". He talked about how he still feels that he is an Israeli: "I'm Israeli. I'm a stranger in America. I'm an outsider". While there, Gene met his half-brother Kobi, and triplet half-sisters Drora, Sharon, and Ogenia. Simmons has plans to take his band KISS to Israel. He has always said that he is an ardent supporter of Israel. At a press conference in Israel, he spoke both Hebrew and English.

In February 2002, Simmons was interviewed on the NPR radio show Fresh Air and asked about his claim of having had sex with 4,600 women. He told Terry Gross: "If you want to welcome me with open arms, I'm afraid you're also going to have to welcome me with open legs," paraphrasing a lyric from The Who's 1981 hit song "You Better You Bet". Gross replied: "That's a really obnoxious thing to say." At the time, Simmons refused to grant permission to NPR to make the interview available online. However, it appears in print in Gross's book All I Did Was Ask (ISBN 1-4013-0010-3) and unauthorized transcripts are available. NPR re-broadcast part of the interview in August 2007. Simmons' bandmate Paul Stanley has frequently used the phrase "... welcomed us with open arms and open legs" in onstage patter during Kiss concerts.

In 2004, during an interview in Melbourne, Australia, while talking about Islamic extremists, Simmons described Islam as a "vile culture", saying that Muslim women had to walk behind their husbands, were not allowed to be educated or to own houses. He said: "They want to come and live right where you live and they think that you're evil." Amongst ensuing criticism, Australian Muslim of the Year Susan Carland argued that Simmons' stereotyping of Muslims was inaccurate. Simmons later clarified his comments on his website, saying he had been talking specifically about Muslim extremists.

In 2005, Simmons was sued by a former girlfriend, Georgeann Walsh Ward, who said she had been "defamed" in the VH1 documentary When Kiss Ruled the World and portrayed as an "unchaste woman". A settlement was reached in June 2006.

In 2007, Simmons openly spoke out against music piracy, and called for file-sharers to be sued. A year later, he threatened further lawsuits, and to withhold new recordings, if file-sharing continued. In 2010, Anonymous staged a DDoS on his Web site, prompting Simmons to hit back with provocative comments once he was back online, at which point Anonymous staged a second DDoS, taking Simmons' site down again.

In 2011, Kiss was removed from the lineup for Michael Jackson's tribute concert because of Simmons' allegations and negative comments regarding Jackson's personal life and legal issues.

Gene Simmons has used various bass guitars during his career including:

Simmons has been involved with such television projects as:

My Dad the Rock Star, a cartoon by the Canadian animation company Nelvana, about the mild mannered son of a Gene Simmons-like rock star;

Mr. Romance, a show created and hosted by Simmons on the Oxygen cable television channel;

Rock School, a reality show in which Simmons tries to make a rock band out of a group of students of Christ's Hospital School in the first season, and in the second, a group of kids from a comprehensive school in Lowestoft;

Gene Simmons Family Jewels, a reality show documenting the personal lives of Simmons, his wife, his son and daughter

On March 9, 2011, Simmons and Kiss co-founder Paul Stanley and E! Entertainment announced that they have finalized a production and development deal to create an as-yet-untitled comedic half-hour kids' television series. Simmons appeared as a psychic working at the Mystic Journey Bookstore in Venice, California on the American hidden camera prank TV series I Get That a Lot.