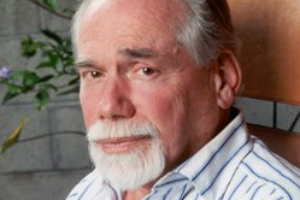 Robert Silverberg (born January 15, 1935) is a prolific American author and editor, best known for writing science fiction. He is a multiple winner of both Hugo and Nebula Awards, a member of the Science Fiction Hall of Fame, a Grand Master of SF.

Silverberg was born in Brooklyn, New York. A voracious reader since childhood, he began submitting stories to science fiction magazines during his early teenage years. He attended Columbia University, receiving a B.A. in English Literature in 1956. During that time he wrote the juvenile novel Revolt on Alpha C, published by Thomas Y. Crowell in 1955 with the cover notice "A gripping story of outer space". He won his first Hugo in 1956 as the "best new writer". For the next four years, by his own count, he wrote a million words a year, mostly for magazines and Ace Doubles. He used his own name as well as a range of pseudonyms during this era, and often worked in collaboration with Randall Garrett. (The Silverberg/Garrett collaborations also used a variety of pseudonyms, the best-known being Robert Randall.) From 1956 to 1959, Silverberg routinely averaged 5 published stories a month, and had over 80 stories published in 1958 alone. In 1959 the market for science fiction collapsed, and Silverberg turned his ability to write copiously to other fields, from carefully researched historical nonfiction to softcore pornography.

In the mid-1960s, science fiction writers were becoming more literarily ambitious. Frederik Pohl, then editing three science fiction magazines, offered Silverberg carte blanche in writing for them. Thus inspired, Silverberg returned to the field that gave him his start, paying far more attention to depth of character development and social background than he had in the past and mixing in elements of the modernist literature he had studied at Columbia.

The novels he wrote in this period are considered far superior to his earlier work. Perhaps the first book to indicate the new Silverberg was To Open the Sky, a fixup of stories published by Pohl in Galaxy Magazine, in which a new religion helps people reach the stars. That was followed by Downward to the Earth, a story containing echoes of material from Joseph Conrad's work, in which the human former administrator of an alien world returns after the planet's inhabitants have been set free. Other acclaimed works of that time include To Live Again, in which the memories and personalities of the deceased can be transferred to other people; The World Inside, a look at an overpopulated future; and Dying Inside, a tale of a telepath losing his powers.

In 1969 Nightwings was awarded the Hugo for best novella. Silverberg won a Nebula award in 1970 for the short story Passengers, two the following year for his novel A Time of Changes and the short story "Good News from the Vatican", and yet another in 1975 for his novella "Born with the Dead".

After suffering through the stresses of a thyroid malfunction and a major house fire, Silverberg moved from his native New York to the West Coast in 1972, and announced his retirement from writing in 1975. In 1980 he returned, however, with Lord Valentine's Castle, a panoramic adventure set on an alien planet, which has become the basis of the Majipoor series—a cycle of stories and novels set on the vast planet Majipoor, a world much larger than Earth and inhabited by no fewer than seven different species of settlers.

Silverberg received a Nebula award in 1986 for the novella Sailing to Byzantium, which takes its name from the poem by William Butler Yeats; a Hugo in 1987 for the novella Gilgamesh in the Outback, set in the Heroes in Hell universe of Bangsian Fantasy; a Hugo in 1990 for Enter a Soldier. Later: Enter Another. The Science Fiction and Fantasy Hall of Fame inducted Silverberg in 1999, its fourth class of two deceased and two living writers, and the Science Fiction and Fantasy Writers of America made him its 21st SFWA Grand Master in 2005.

Silverberg has been married twice. He and Barbara Brown married in 1956, separated in 1976, and divorced a decade later. Silverberg and science fiction writer Karen Haber married in 1987. They live in the San Francisco Bay Area.