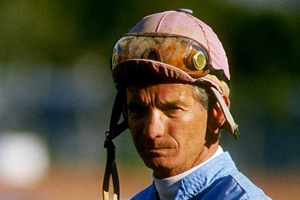 American jockey who rode a record-setting 40,350 races, reached 8,833 winners and $123 million in purses from the day of his first race on 3/19/1949 until his retirement in February 1990. Considered the most successful jockey in history, his wins include four Kentucky Derbies, five Belmont Stakes and three Preakness Stakes. He was also the first jockey to win over $100 million. A car accident on 4/08/1991 left him paralyzed.

Born prematurely, Shoemaker weighed only two and a quarter pounds at birth. As an adult, he weighed 100 pounds at 4'11" tall. His parents were divorced when he was three, and he was raised with his mother in Fabens, TX. Then he and his younger brother, Lonnie, went to live part-time with their grandfather, who was a foreman of a ranch in Winters, 30 miles southwest of Abilene. It was there that he rode his first horse.

During the depression, his dad and step mom, Vivian, with what was now a family of four sons, moved to California. He went to grade school in Baldwin Park, and was still very small in stature when he entered high school, weighing only 80 pounds. He wanted to be a member of a team so he signed up for boxing and wrestling, where his small stature aided his quickness. A girlfriend in high school suggested he try to become a jockey. He went to a ranch where thoroughbreds were trained, and it was a turning point for him. After school in the mornings, he rushed to the ranch to work. He forged his father’s signature on a transfer to another high school, and never went back to school, even though his father thought he was. It was a year before his dad caught on, at which point Shoemaker said he was leaving home to live at the ranch.

Shoemaker left the ranch in 1948 to continue his riding education at Bay Meadows in San Mateo. He went to Del Mar and worked for trainer George Reeves, who introduced him to an agent. In March 1949, Shoemaker rode in his first race at Golden Gate Fields near San Francisco. A month later, at the same track, he rode his first winner. A year later, he tied for the riding championship with a record 388 winners. In 1951, he won his first $100,000 stakes race at Santa Anita. By the end of that year, he was the leading rider in the country in purses won - and second in total races won. By 1968, he had won the Kentucky Derby three times.

He married three times, meeting and marrying his first wife, Virginia McLaughlin in 1949; Babs Masterson in 1961, with whom he had an adopted son, Mitchell; and Cindy Barnes, whom he married in 1978, and with whom he has a daughter, Amanda. In 1958, he was elected into the Racing Hall of Fame.

His first accident occurred on 1/26/1968 when he broke his right thigh bone, and he didn’t return to the track until 2/11/1969. His most serious injury occurred on 4/30/1969, when a horse flipped over on him in the walking ring and he suffered a broken pelvis and other injuries.

He retired as a jockey in 1990 to train horses. On 4/08/1991, around 8:00 PM, his car rolled almost 50 feet down a steep embankment in San Dimas, California. He suffered major internal injuries that required surgery and resulted in paralysis. He was alone in his car at the time and authorities suspect that he was driving under the influence of alcohol. Within months he was training horses from his wheelchair until his retirement in 1997.

The Hall of Fame jockey died in his sleep in San Marino, California on October 12, 2003.