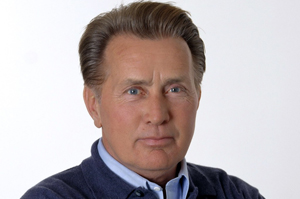 Early life
Sheen was born Ramón Gerardo Antonio Estévez in Dayton, Ohio to Francisco Estévez, a Galician factory worker/machinery inspector from Parderrubias, Galicia, Spain, and Mary Anne (Phelan), an immigrant from County Tipperary, Ireland. Sheen's mother fled from Ireland during the Irish War of Independence due to her family's IRA connections. Sheen adopted his stage name in honor of Catholic archbishop and theologian Fulton J. Sheen. Sheen lived on Brown Street in the South Park neighborhood, and was one of 10 siblings (9 boys and one girl). He attended Chaminade High School (now Chaminade-Julienne High School). He was raised as a Roman Catholic.

For some time during the 1940s and 1950s the Estevez family lived in Bermuda where Francisco was a representative of IBM, selling cash registers and early computing and copying equipment to businesses and the US Air Force, according to a report in the Royal Gazette newspaper. The family lived on St. John's Road, Pembroke, just outside Hamilton and attended the Mount Saint Agnes school, which is run by the Sister's Of Charity order of the Roman Catholic Church. Martin was the only one of the ten Estevez children who was not actually born in Bermuda. One has returned to live there and is a guidance counsellor at Mt. St. Agnes.

Career
Sheen had wanted to act since he was very young, but his father disapproved. In spite of this, Sheen borrowed money from a priest and headed to New York City. While Sheen claims he deliberately flunked the entrance exam for the University of Dayton so that he could pursue his acting career, he still has an affinity for UD, and is seen drinking from a "Dayton Flyers" coffee mug during several episodes of The West Wing. Sheen has said that he was greatly influenced by the actor James Dean. Sheen developed a theater company with other actors in hopes that a production would earn him recognition. In 1963 he made an appearance in Nightmare, an episode from the TV science fiction series The Outer Limits. The following year he starred in the Broadway play The Subject Was Roses, which he recreated in the 1968 film of the same name. Sheen was a co-star in the controversial, Emmy-winning 1972 television movie That Certain Summer said to be the first television movie to portray homosexuality in a sympathetic, non-judgemental light. His next important feature film role was in 1973, when he starred with Sissy Spacek in the crime drama Badlands - which he has said in many interviews is his best film.

In 1974, Sheen portrayed a hot rod driver in the TV movie The California Kid, and that same year received an Emmy Award nomination for Best Actor in a television drama for his portrayal of Pvt. Eddie Slovik in the made-for-television film, The Execution of Private Slovik. The film told the World War II story of the only American soldier to be executed for desertion since the American Civil War. It was Sheen's performance in this film that ultimately led to Francis Ford Coppola choosing him for a starring role in 1979's Apocalypse Now which gained him wide recognition. On the set of Apocalypse Now, Sheen admitted that he wasn't in the greatest shape and was drinking heavily. On location Sheen had a heart attack and crawled out to a road for help.

Sheen has also done voiceovers as the narrator for the Eyewitness Movie series.

In his acting career, Sheen has been nominated for twelve Emmy Awards, winning three. He has also earned eight nominations for Golden Globe Awards. Sheen has a star on the Hollywood Walk of Fame, at 1500 Vine Street.

NUI Galway
In light of the end of filming of "The West Wing", Sheen announced plans to further his education. "My plan is to read English literature, philosophy and theology in Galway, Republic of Ireland, where my late mother came from and where I'm also a citizen". Speaking after an honorary arts doctorate was conferred on him by the National University of Ireland, Sheen joked that he will be the "oldest undergraduate" at the National University of Ireland (NUI), Galway when he starts his fulltime studies there in the autumn of 2006. Although expressing the concern that he might be a "distraction" to other students at NUIG, he will be attending lectures like everyone else. Speaking the week after filming his last episode of The West Wing, he said "I'm very serious about it." He once said "I never went to college when I was young and am looking forward to giving it a try... at age 65!" On 1 September 2006, Sheen was among first to register as a student at NUI Galway. He has since left the University after completing a semester.

Political activism
Martin Sheen is no stranger to politics, both as an actor and in real life. He has played U.S. President John F. Kennedy (in the miniseries Kennedy — The Presidential Years), Attorney General Robert Kennedy in the television special The Missiles of October, White House Chief of Staff A.J. McInnerney in The American President, sinister future president Greg Stillson in The Dead Zone, and fictional Democratic president Josiah Bartlet in the acclaimed television drama The West Wing.

Although he didn't attend college, Sheen credited the Marianists at University of Dayton as a major influence on his public activism. Sheen is known for his robust support of liberal political causes, such as United States military actions and a toxic-waste incinerator in East Liverpool, Ohio. Sheen has resisted calls to run for office, saying "There's no way that I could be the president. You can't have a pacifist in the White House … I'm an actor. This is what I do for a living." Sheen is an honorary trustee of the Dayton International Peace Museum.

He supported the 1965 farm worker movement with Cesar Chavez in Delano, California.

He has also supported causes for PETA and is a proponent of the Consistent Life ethic, which advocates against abortion, capital punishment and war. He also supports the Democrats for Life of America's Pregnant Women Support Act. In 2004, along with fellow actor Rob Reiner, Sheen campaigned for Democratic presidential candidate Howard Dean. He later campaigned for nominee John Kerry.

On 16 May 1995, Martin Sheen and Paul Watson from Sea Shepherd were attacked in a hotel on Magdalen Islands by a number of Canadian sealers, who were upset that they had come there to protest against the annual seal hunt and promote non-lethal alternatives. Sheen was trying to negotiate with the angry mob while Watson was escorted to the airport by police and had to spend the night in hospital. On 28 August 2005, he visited anti-Iraq War activist Cindy Sheehan at Camp Casey. He prayed with her and spoke to her supporters. He began his remarks by stating, "At least you've got the acting President of the United States," referring to his role as fictional President Josiah Bartlet on The West Wing. Cindy Sheehan had been demanding to speak with the actual President, George W. Bush.

Sheen endorsed marches and walkouts called by the civil rights group, By Any Means Necessary (BAMN), to force the state of California to honor the Cesar Chavez holiday. On March 30, the day of the protests, thousands of students, primarily Latino from California and elsewhere, walked out school in support of the demand.

On 10 April 2006, the New York Times reported that members of the Democratic Party in Ohio had contacted Sheen, attempting to persuade him to run for the U.S. Senate in Ohio. Sheen declined the offer, stating that "I'm just not qualified," he said. "You're mistaking celebrity for credibility." On 26 November 2006, the Sunday Times in the Republic of Ireland, where Sheen is currently living due to his enrollment in NUI Galway, reported on him speaking out against mushroom farmers exploiting foreign workers by paying them as little as €2.50 an hour in a country where the minimum wage is €7.65.

Sheen married art student Janet Templeton on December 23, 1961, and they have four children, three sons and a daughter, all of whom are actors: Emilio Estévez, Ramón Luis Estévez, Charlie Sheen and Renée Estévez.

In the Spring of 1989, Sheen was named Honorary Mayor of Malibu, California. He promptly marked his appointment with a decree proclaiming the area "a nuclear-free zone, a sanctuary for aliens and the homeless, and a protected environment for all life, wild and tame". Some local citizens were angered by the decree, and the Malibu Chamber of Commerce met in June of that year to consider revoking Sheen's title, but voted unanimously to retain him. Sheen has limited lateral movement of his left arm, which is three inches shorter than his right, due to it being crushed by forceps during his birth.