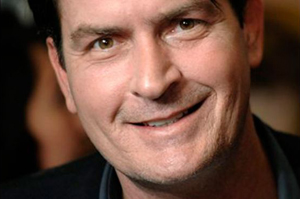 Early life
Sheen was born in New York City to Janet Templeton, an artist, and actor Martin Sheen (who was born "Ramón Estévez"). He has two brothers and one sister, all of whom are now actors: Emilio Estévez, Ramón Estévez Jr. and Renée Estévez. Sheen attended Chaminade-Julienne High School, where he was a star pitcher and shortstop for the baseball team. He also showed an early interest in acting, making several Super-8 films with schoolmates Rob Lowe and Sean Penn. Just a few weeks before graduation, Sheen was expelled from the school for poor grades and bad attendance.

Career
Sheen began acting in 1974 at the age of nine, appearing in a small role alongside his father in the TV movie The Execution of Private Slovik. Sheen's film career began in 1984 with minor and supporting roles in films such as Red Dawn (1984), Ferris Bueller's Day Off (1986) and his first major role was in Platoon (1986). In 1987, he starred with his father, Martin, in Wall Street. In 1988 he appeared opposite his brother Emilio Estevez in Young Guns and again in 1990 in Men at Work. In 1990, he starred alongside Clint Eastwood in the buddy cop action film The Rookie.

Sheen is perhaps best known for his comedy roles, including the Major League films, Money Talks and the spoof Hot Shots! films. In 1999, Sheen played himself in the comedy Being John Malkovich. He recently appeared in the spoof series Scary Movie 3 and Scary Movie 4. In 2001 and 2002, Sheen played the lead role in the political television sitcom, Spin City (as Michael J. Fox's replacement on that show). In 2002, he won the Golden Globe Award for "Best Performance by an Actor in a Television Series - Musical or Comedy" for this role (Awards detailed below). Currently Sheen plays the role of Charlie Harper on the sitcom Two and a Half Men, which debuted in 2003.

Sheen and his former girlfriend Paula Profit, had a daughter together, Cassandra Jade Estevez (born 1985), but did not marry.

In 1990, Sheen accidentally shot his then-fiancée, Kelly Preston; in the arm; she suffered only a minor injury requiring two stitches. The relationship ended shortly thereafter. In 1992, frequently visiting unknown galpal in San Antonio and Houston, Texas while filming. In 1993, his name was found among Hollywood Madam Heidi Fleiss's list of her most frequent customers, and it was revealed that Sheen hired highly compensated prostitutes from escort agencies. During this time, it was reported that he was addicted to cocaine. In the Empire magazine interview, he stated that he took a bullet for the industry when he was called to the court to testify.

Sheen was the 2004 spokesperson for the Lee National Denim Day breast cancer fundraiser that raised millions of dollars for research and education regarding the disease. Sheen stated that a friend of his died due to breast cancer, and he wanted to try to help find a cure for the disease. Sheen is noted for his love of the 1970 Buick GS 455 Stage 1. He currently owns 10 of the cars, including a rare GSX yellow and white GS Stage 1. He also owns a convertible Stage 1 with a 4spd transmission and an automatic. He was the only person in the world to have brought a 2-door hardtop Stage 1 to Motion Performance in Baldwin Long Island and had them make it a mid second 10 second machine (the car is worth in excess of $600,000).

9/11 truth movement involvement
On March 20, 2006, Sheen revealed during an Alex Jones interview that he questions the "official story" concerning the September 11, 2001 attacks. Sheen stated during the interview, "...it just didn't look like any commercial jetliner I've flown on any time in my life and then when the buildings came down later on that day I said to my brother, 'Call me insane, but did it sorta look like those buildings came down in a controlled demolition?'" During a March 22, 2006 appearance on CNN's Showbiz Tonight, Sheen stated "...19 amateurs with box cutters taking over four commercial airliners and hitting 75 percent of their targets, that feels like a conspiracy theory".

Divorce from Denise Richards
Main article: Denise Richards: Divorce from Charlie Sheen
On April 19, 2006, Denise Richards filed for divorce from Sheen under the laws of the state of California. In her 17-page court filing, Richards alleged that Sheen's behaviour was increasingly erratic, making their marriage impossible, and that she feared for her safety, and for the safety of their daughters.

"Living Legend of Sex"
In a 1997 Empire magazine interview, Sheen was asked what was the largest number of people Sheen had had sex with at any one time. He replied: "...five girls at once. It was a pile-up...and it wasn't so much about going Caligula, it was very organised. Very ordered...all six people in that room came out of it pretty satisfied". Sheen was listed as #2 on Maxim's "Top 10 Living Legends of Sex", citing an alleged 5,000 women that he has slept with.