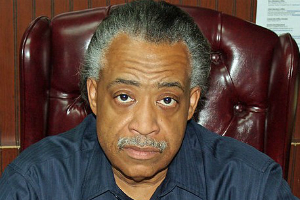 American clergyman, a minister and a Democratic activist. Preaching from the age of four, he was ordained at ten. He is the author of an autobiography "Go And Tell Pharaoh."

Big, bulky, black and an opinionated civil rights leader, in January 1997 he was the underdog candidate for mayor of New York with the backing of some prominent black militant nationalists, hoping to replace Mayor Giuliani. He did not succeed but did retain his strong voice on issues such as black welfare rights, opinions that have gotten him into trouble at various times. Sharpton also unsuccessfully sought twice to represent New York in the U.S. Senate. His delivery, as well as his hairstyle, are reminiscent to that of James Brown, a friend of his from boyhood.

Said to be the model for the demagogic Rev. Bacon in Tom Wolfe's "Bonfire of the Vanities," Sharpton's brand of Guerrilla urban politics terrorize more established party politicians. In August 1999 he advised Hillary Clinton that he should visit his Harlem headquarters if she is seeking the black vote for her stand for the Senate.

Sharpton expanded his Harlem-based National Action Network at the end of 2001, opening an office in Los Angeles with the goal of forging a political coalition of blacks and Latinos. He is exploring a 2004 Democratic presidential bid, about which he made public note in the middle of April 2003