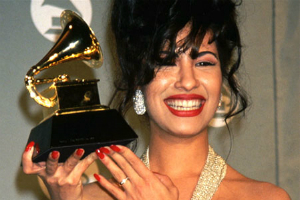 Selena Quintanilla-Pérez (April 16, 1971 – March 31, 1995), known simply as Selena, was an American singer-songwriter. She was named the "top Latin artist of the '90s" and "Best selling Latin artist of the decade" by Billboard for her fourteen top-ten singles in the Top Latin Songs chart, including seven number-one hits. Selena had the most successful singles of 1994 and 1995, "Amor Prohibido" and "No Me Queda Más". She was called "The Queen of Tejano music" and the Mexican equivalent of Madonna. Selena released her first album, Selena y Los Dinos, at the age of twelve. She won Female Vocalist of the Year at the 1987 Tejano Music Awards and landed a recording contract with EMI a few years later. Her fame grew throughout the early 1990s, especially in Spanish-speaking countries, and she had begun recording in English as well.

Selena was murdered at the age of 23 on March 31, 1995 by Yolanda Saldívar, the former president of her fan club. On April 12, 1995, two weeks after her death, George W. Bush, governor of Texas at the time, declared her birthday "Selena Day" in Texas. Warner Bros. produced Selena, a film based on her life starring Jennifer Lopez, in 1997. Selena's life was also the basis of the musical Selena Forever starring Veronica Vazquez as Selena. In June 2006 Selena was commemorated with a life-sized bronze statue (Mirador de la Flor in Corpus Christi, Texas) and a Selena museum opened there. She has sold over 60 million albums worldwide, making her one of the best-selling artists of all time. She is also the only female artist to have five albums in U.S. Billboard 200 at the same time.

Selena was born in Lake Jackson, Texas, as the youngest of three children born to a Mexican American father, Abraham Quintanilla, Jr. and a half-Cherokee Native American mother, Marcella Ofelia (née Samora). She was raised as a Jehovah's Witness. Selena began singing at age three. When she was nine years old, her father launched a vocal group consisting of several of his children, Selena y Los Dinos. They initially performed at a restaurant the family operated, but went bankrupt soon thereafter. They moved to Corpus Christi, Texas, where they performed wherever they could - street corners, weddings, quinceañeras, and fairs. As Selena grew more popular, the demands of her performance and travel schedule began to interfere with her education. Her father took her out of school when she was in the eighth grade. At seventeen, she earned a high school diploma by the American School Program.

The band's efforts paid off in 1985, when fourteen-year-old Selena recorded her first album for a record company. Her father bought all of the original copies. It was re-released in 1995 as Mis Primeras Grabaciones. Over the next three years, not under a recording contract, she released six more albums.

At the 1987 Tejano Music Awards, Selena won Best Female Vocalist, an award she would dominate for the rest of her life. In 1989, José Behar, the former head of Sony Music Latin, signed Selena with Capitol/EMI. Behar later explained signed her because he thought he had discovered the next Gloria Estefan. In 1988, she met Chris Pérez, who had his own band. Two years later, the Quintanilla family hired him to play in Selena's band and they began dating. At first her father opposed their relationship and went as far as firing Pérez from the band. He eventually came to accept the relationship. On April 2, 1992, Selena and Pérez were married in Nueces County, Texas.

In 1990, her debut album Ven Conmigo was released, written by her brother and main songwriter Abraham Quintanilla III. This recording was the first Tejano album recorded by a female artist to achieve gold status. Around the same time, a registered nurse and fan named Yolanda Saldívar approached Selena's father with the idea of starting a fan club. He approved and Saldívar became the club's president; later, she worked as the manager of Selena's retail enterprises. In 1992, Selena’s stardom got a big boost with the song, "Como La Flor" off a new album, Entre a Mi Mundo. The next album, Selena Live! won Best Mexican-American Album at the 36th Grammy Awards.

The album Amor Prohibido was released in 1994. It was nominated for a Grammy award for Mexican-American Album of the Year. Selena and her band received yet more accolades in 1994. Billboard's Premio Lo Nuestro awarded them six awards, including Best Latin Artist and Song of the Year for "Como La Flor". Meanwhile, her duet with the Barrio Boyzz, "Donde Quiera Que Estés", reached number one in the Billboard Latin Charts. This prompted Selena to tour in Latin America. She performed a duet with Salvadoran singer Álvaro Torres, "Buenos Amigos". By fall of 1994, Amor Prohibido was a commercial success in Mexico and made four number one Latin hits, replacing Gloria Estefan's Mi Tierra on the chart's number one spot. It sold over 400,000 copies by late 1994 in the U.S. and another 50,000 copies in Mexico, reaching gold status.

Aside from music, she began designing and manufacturing a clothing line in 1994 and opened two boutiques called Selena Etc., one in Corpus Christi and the other in San Antonio. Both were equipped with in-house beauty salons. Hispanic Business magazine reported that the singer earned over five million dollars from these boutiques. Selena briefly played opposite Erik Estrada in a Mexican telenovela titled Dos Mujeres, Un Camino. In 1995 she entered negotiations to star in another telenovela produced by Emilio Larrosa.

At the peak of her career, Selena visited local schools to talk to students about the importance of education. She also donated her time to civic organizations such as D.A.R.E.. These demonstrations of community involvement won her loyalty from her fan base. Selena scheduled her English album for release in the summer of 1995.

In early 1995, the Quintanillas discovered that Saldívar was embezzling money from the fan club and decided to fire her. Three weeks later, Selena agreed to meet Saldívar at a Days Inn motel in Corpus Christi to retrieve financial records Saldívar had been refusing to turn over. Saldívar once again delayed the handover by claiming she had been raped in Mexico. Selena then drove Saldívar to a local hospital, where doctors found no evidence of rape. They returned to the motel, where Selena again demanded the missing financial papers. Saldívar drew a pistol from her purse and pointed it at Selena. Selena tried to flee, but Saldívar shot her once in her right shoulder, severing an artery. Critically wounded, Selena ran towards the lobby for help. She collapsed on the floor as the clerk called 911, with Saldívar still chasing her and calling her a "bitch". Selena died in a hospital from loss of blood at 1:05 p.m. on March 31, 1995, 16 days before her 24th birthday.

Selena's murder had widespread impact. Major networks interrupted their regular programming to break the news; Tom Brokaw referred to Selena as "The Mexican Madonna". It was front page news on The New York Times for two days after her death. Numerous vigils and memorials were held in her honor, and radio stations in Texas played her music non-stop. Her funeral drew 60,000 mourners, many of whom traveled from outside the United States. Among the celebrities who were reported to have phoned the Quintanilla family to express their condolences were Gloria Estefan, Celia Cruz, Julio Iglesias, and Madonna. People published a commemorative issue in honor of Selena's memory and musical career, titled Selena 1971–1995, Her Life in Pictures. This issue sold nearly 450,000 copies. Two weeks later, the company released a special issue for Selena, which sold more than 600,000 copies. A few days later, Howard Stern mocked Selena's murder and burial, poked fun at her mourners, and criticized her music. Stern said, "This music does absolutely nothing for me. Alvin and the Chipmunks have more soul ... Spanish people have the worst taste in music. They have no depth." Stern's comments outraged and infuriated the Hispanic community in Texas. After a disorderly conduct arrest warrant was issued in his name, Stern made an on-air apology, in Spanish, for his comments. On April 12, 1995, George W. Bush, then Governor of Texas, declared Selena's birthday April 16 as "Selena Day" in Texas. Selena was inducted into the "Latin Music Hall of Fame" that same year.

That summer, Selena's album Dreaming of You, a combination of Spanish-language songs and new English-language tracks, debuted at number one on the U.S. Billboard 200, making her the first Hispanic singer to accomplish this feat. and the second highest debut after Michael Jackson's HIStory. On its release date, the album sold over 175,000 copies, a record for a female pop singer, and it sold two million copies in its first year. Dreaming of You sold more than 330,000 copies in its first week. The album was number 75 in the List of BMG Music Club's top selling albums in the United States. Songs such as "I Could Fall in Love" and "Dreaming of You" were played widely by mainstream English-language radio, with the latter reaching number 21 on the Billboard Hot 100. Meanwhile, "I Could Fall in Love", while ineligible for the Hot 100 at the time, reached number 8 on the Hot 100 Airplay chart and the top 10 on the Adult Contemporary Chart. "Dreaming of You" was certified 35× Platinum (Latin field) by the Recording Industry Association of America. In October 1995, a Houston jury convicted Saldívar of first degree murder and sentenced her to life in prison, with the possibility of parole in thirty years. Under a judge's order, the gun used to kill Selena was destroyed in 2002, and the pieces thrown into Corpus Christi Bay.

Jennifer Lopez portrayed Selena in a film about Selena's life. Selena was among two other Latin artists who had the best sales of records in 2001. On March 16, 2011, the United States Post Office released a "Latin Legends" memorial stamp to honor Selena, Carlos Gardel, Tito Puente, Celia Cruz, and Carmen Miranda. She has sold over 60 million albums worldwide.