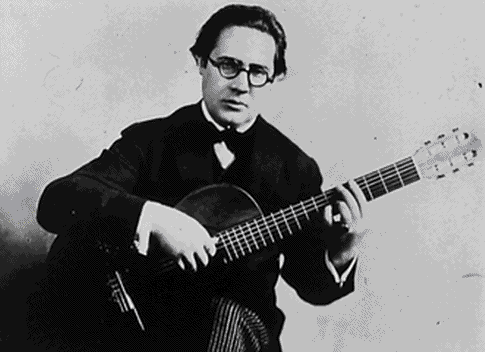 Andrés Torres Segovia, 1st Marquess of Salobreña (21 February 1893–3 June 1987) was a Spanish classical guitarist born in Linares, Spain who is considered to be the father of the modern classical guitar movement by most modern music scholars.

In recognition of his contributions to music and the arts, Segovia was ennobled on 24 June 1981 by King Juan Carlos I, who elevated Segovia into the first hereditary Marquess of Salobreña, formally styled as "El señor don Andrés Torres Segovia, marqués de Salobreña" (the Most Illustrious Lord The Marquess of Salobreña). He was granted the following coat of arms: "en campo de azur sobre ondas de azur y plata, unas rocas de su color, sumadas de una torre donjonada de oro, aclarada de azur" (a field of azur on waves of azur and silver, rocks of the same color, plus a gold dungeon tower, with azur highlights).

Segovia said that he began playing the guitar at the age of six. Angelo Gilardino, who has worked at the Fundación Andrés Segovia in Spain, noted: "Though it is not yet completely documented, it seems clear that, since his tender childhood, he learnt playing as a flamenco guitarist. In fact, the first guitar he owned had formerly been played by Paco de Lucena, the greatest flamenco guitarist of the epoque, who died when Segovia was five years old. Since then, Segovia was given some instruction by Agustinillo, an amateur flamenco player who was a fan of Paco de Lucena."

As a teenager, Segovia moved to the town of Granada, where he studied the guitar and soaked up the other-worldly atmosphere of the Palace at Alhambra, a Moorish relic overlooking the town which he regarded as his spiritual awakening.

Segovia's first public performance was in Spain at the age of sixteen, and a few years later he held his first professional concert in Madrid, playing guitar transcriptions by Francisco Tárrega and some works by J.S. Bach, which he had transcribed and arranged himself. Although he was always discouraged by his family, and looked down on by many of Tárrega's pupils, he always continued to diligently pursue his studies of the guitar. Segovia's technique differed from that of Tárrega and his followers, such as Emilio Pujol. Both Segovia and Miguel Llobet (who taught Segovia several of his transcriptions of Granados' piano works) plucked the strings with a combination of his fingernails and fingertips, producing a sharper sound than many of his contemporaries. With this technique, it was possible to create a wider range of timbres, or tones, than when using the fingertips or nails alone. Historically, classical guitarists have debated which of these techniques is the best approach. While the majority now play with a combination of the fingernails/tips, some still prefer the convenience and mellower sound of flesh alone.

Segovia's status as a student of the guitar is a matter of debate among guitarists. The Segovia autobiography, written for mass consumption at the height of his career, depicts him as being self-taught. There are admissions of his seeking out Llobet's advice only for a short time when in his early twenties, but Segovia is quite clear about the lack of any real influence on his playing. Although at that age Segovia may well have been much more than a neophyte, he was still youthful enough to have received valuable instruction, and to have been significantly influenced by it. Indeed, Ronald Purcell points out that "Segovia, whose performance style and technique reveals the principles of Tárrega, was basically influenced by Llobet....This stylistic influence can be heard when comparing Llobet's Parlophone Electric recordings (Chanterelle Historical Recordings CHR 001) with Segovia's Angel recordings, ZB 3896" (Llobet 1989, 1: ii).

Purcell later states, "At the age of twenty-two he (Segovia) pursued what he considered the only direct contact to Tárrega, Llobet, for refinement of his technique and especially for the music that both he and Tárrega had written and transcribed for the guitar..."(ibid). The accuracy of this date (Segovia would have been twenty-two in 1915) seems to be somewhat questionable. A photograph taken at the exhumation of Tárrega in 1915, clearly shows Segovia at the foot of the coffin, but Llobet does not appear in the photo, and would likely have been present had he, in fact, been in Spain at the time. It may well have been another two years before Segovia began to work with Llobet and there seems to be nothing that would contradict this 1917 date.

The status of the classical guitar at the beginning of the twentieth century had declined, and only in Barcelona and in the Rio de la Plata region of South America could it have been said to be of any significance. When Segovia arrived on the scene, this situation was just beginning to change, largely through the efforts of Llobet. It was in this changing milieu that Segovia, whose strength of personality and artistry coupled with new technological advances such as recording, radio, and air travel, succeeded in moving the guitar forward to its present day level of acceptance.

In 1924, Segovia visited the German luthier (guitar builder) Hermann Hauser Sr. after hearing some of his instruments played in a concert in Munich. Segovia had been impressed with the quality of Hauser's work and he encouraged Hauser to copy his 1912 Manuel Ramirez guitar (an instrument generally believed to have been built by Santos Hernandez while he was foreman of the Ramirez shop). He examined and made measurements of this instrument. As Llobet, who also visited the luthier in the same year, owned an 1859 Antonio Torres, Hauser also had opportunity to examine it as well.

After World War Two Segovia became among the first to endorse the use of nylon strings instead of gut strings. This new advance allowed for greater stability in intonation, and was the final missing ingredient in the standardization of the instrument.

After Segovia's debut tour in the United States in 1928, the Brazilian composer Heitor Villa-Lobos composed his now well known Twelve Études (Douze études) and later dedicated them to Segovia. This proved to be a lasting relationship as Villa-Lobos continued to write for Segovia. He also transcribed numerous classical pieces himself and revived the pieces transcribed by men like Tárrega. Many guitarists in the Americas, however, had already been playing these same works before Segovia arrived.

In 1935, he gave a premiere of Bach's Chaconne, a difficult piece for any instrument. He moved to Montevideo performing many concerts in South America in the thirties and early forties. After the war, Segovia began to record more frequently and perform regular tours of Europe and the USA, a schedule he would maintain for the next thirty years of his life.

In 1954, Joaquin Rodrigo composed Fantasía para un gentilhombre at the request of Segovia.

In recognition of Segovia's cultural contribution, he was elevated to the Spanish nobility in 1981, with the title Marques de Salobreña.

Andres Segovia continued performing into his old age, living in semi-retirement during his 70s and 80s on the Costa del Sol. Two films were made of his life and work—one when he was 75 and the other, 84. They are available on DVD called "Andrés Segovia - in Portrait".

When Segovia travelled by air internationally, he always purchased the seat next to him for his guitar, not wanting to trust it to baggage handlers.

Segovia died in Madrid of a heart attack at the age of 94.

Segovia's goals
As Segovia's career and acclaim grew he determined "five purposes" as goals for his legacy. They were outlined by Segovia in Guitar Review No 32:

1. To extract the guitar from the noisy and disreputable folkloric amusements...
2. I requested the living composers not in the field of guitar to write for me. This was the second of my purposes: to create a wonderful repertoire for my instrument.
3. My third purpose was to make the guitar known by the philharmonic public of the world.
4. ... to provide a unifying medium for those interested in the development of the guitar. This I did through my support of the now well known international musicological journal, the Guitar Review
5. I am still working on my fifth and maybe the last purpose, which is to place the guitar in the most important conservatories of the world for teaching the young lovers of it, and thus securing its future.

Awards and bringing the guitar to the concert stage
Segovia was awarded many prizes and honours including Ph.D, honoris causa from ten universities.

Segovia was credited by his publicity for bringing the guitar (as a solo instrument) to the concert stage. While this is undoubtedly an exaggerated claim, the fact that he widened the audience for the guitar and was a vital force in helping it to gain respectability among other serious musicians, critics, and academe is beyond dispute.

Controversy regarding Segovia
Segovia was frequently lauded as the world's greatest classical guitarist with the result that many reading such hyperbole believed that he set an unassailable standard of virtuosity.

Today however, this view has been called into question.
John Williams (in 1999) has called him a "limited musician", though he refers to Segovia's inspiration and the people he met as "essential". Allan Kozinn noted (in 1986) that "By today's musicological standards, his rolled chords, quick vibrato and slurred phrases may seem antique; yet they carry Andres Segovia's unmistakable interpretive thumbprint, and they are classics of their kind."
Many modern performers endeavour to play music in an authentic style of the specific period, thus "tread a different stylistic path ". Interpretively Segovia's performances of works that were written for him, particularly those in which the composer consulted with him during the process, seem to have fared better.

However, Segovia's main achievement of making the guitar known to a wider audience, and expanding its repertoire remains.

Editorial legacy
Segovia left a large body of edited works and transcriptions. His editions of works originally written for guitar include newly fingered and occasionally revised versions of works from the standard repertoire (most famously, his edition of twenty estudios by Fernando Sor), as well as compositions written for him. Many of the latter were edited by Segovia, working in communication with the composer, before they were first published. Because of Segovia's predilection for altering the musical content of his editions to reflect his interpretive preferences, many of today's guitarists prefer to examine the original manuscripts, or newer publications based on the original manuscripts in order to compare them with Segovia's published versions, so as to accept or reject Segovia's editorial decisions.

Teaching
Segovia viewed teaching as vital to his mission of propagating the guitar, and gave master classes throughout his career. His most famous master classes took place at Santiago de Compostela in northern Spain. Like everything else in Segovia's career, his teaching is a source of controversy among some of today's players, who consider his style to be dogmatically authoritarian.