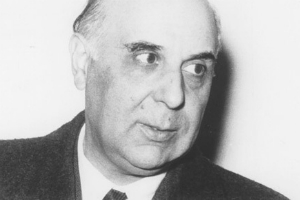 Greek / Turkish poet, essayist and diplomat who won the Nobel Prize for Literature in 1963.

Seferis's father was a lawyer and his mother descended from wealthy landowners. He grew up advantaged and wrote poetry from age 14 on. In 1914, his family moved from Smyrna to Athens. Four years later, in 1918, when his family moved to Paris, Seferis entered the University of Paris to study law. There he became interested in literature and wrote more poetry. Mourning the loss of his native Smyrna to the Turks in 1920, he continued his legal studies, finishing his doctoral degree in 1924.. He returned to Athens in 1925, and, the following year, he was admitted to the Royal Greek Ministry of Foreign Affairs. His diplomatic career included posts in England (from 1931-34) and Albania (from 1936-38). During WWII, he was in exile with the Greek government, returning to Athens in 1944. He then held diplomatic posts in Turkey (1948-50) and London (1951-53). From 1953-56, he served as minister to Lebanon, Syria, Jordan and Iraq. From 1957-1961, he was the Royal Greek Ambassador to the UK.

His poetry reflects his travels and, like the Odyssey, includes themes of wandering, alienation and death. His earliest collection of poetry was published in 1931, and he became representative of the symbolist poets of the time.. Seferis wrote a book of essays in 1962 and translated works into his native Greek by T. S. Eliot and by other English, American and French poets.