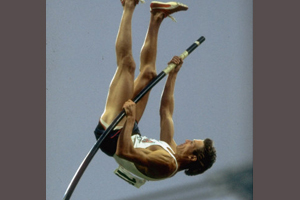 Four years later, in Munich, he's best remembered for the Olympic gold medal he didn't get. In the 1972 Summer Olympics, a last-minute ruling barred the new banana-Pole from Olympic competition, forcing some vaulters, including Seagren, to compete with unfamiliar poles. East German Wolfgang Nordwig didn't use a Cata-Pole and won the gold medal, with Seagren coming second. It was the first time an American had failed to win the Olympic gold medal in the pole vault. In fact, no American would again win a gold medal in the pole vault until Nick Hysong won in 2000.

A 1968 University of Southern California graduate, Seagren took a try at professional track and later he started his career in television and movies as a show host and soap opera actor.

Seagren won the inaugural American Superstars sports competition in 1973 as well as the first World Superstars in 1977, his lone victories in both events. He was able to enjoy the spoils from these competitions because he had become a professional athlete having signed to join the International Track Association (ITA) tour. On the ITA tour he renewed his very personal antagonistic rivalry with fellow American pole vaulter Steve Smith.

Bob Seagren went on to become an actor, appearing in several movies and television shows, including the controversial sitcom Soap in 1977 in which he played Dennis Phillips, a gay football player in a relationship with Billy Crystal's character Jodie Dallas.

Today, he is CEO of International City Racing, which specializes in the development, management, and implementation of road racing, endurance, and fitness events, including the Long Beach International City Marathon. He is also an active supporter of the Commission on Athletics of the California Community Colleges.

He was named to the inaugural class of the Mt. SAC Relays Hall of Fame.

In 1986 he was inducted into the USATF National Track and Field Hall of Fame.