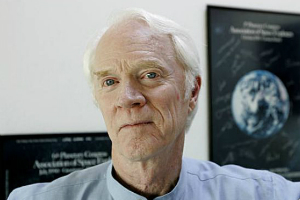 Russell Louis "Rusty" Schweickart aka Schweikart (born October 25, 1935) is an American former astronaut, research scientist, US Air Force fighter pilot, business and government executive. Schweickart, chosen in NASA's third astronaut group, is best known as the Lunar Module pilot on the Apollo 9 mission, the first manned flight test of the LM, on which he performed the first in-space test of the Portable Life Support System used by the Apollo astronauts who walked on the Moon. As backup commander of the first Skylab mission, he was responsible for developing the hardware and procedures used by the first crew to perform critical in-flight repairs of the Skylab station. After Skylab, he served for a time as Director of User Affairs in NASA's Office of Applications.

Schweickart left NASA in 1977 to serve for two years as California governor Jerry Brown's assistant for science and technology, then was appointed by Brown to California's Energy Commission for five and a half years, serving as chairman for three.

Schweickart was born in Neptune Township, New Jersey. After graduating from Manasquan High School, he earned an B.S. and M.S. in Aeronautics/Astronautics from the Massachusetts Institute of Technology in 1956 and 1963 respectively.

Schweickart served in the US Air Force and Massachusetts Air National Guard (101st Tactical Fighter Squadron) from 1956 to 1963, with over 4000 hours of flight time, including 3500 hours in high performance jet aircraft.

Schweickart was chosen as part of NASA Astronaut Group 3 in October 1963. On March 21, 1966, he was named as the back-up Pilot for Roger B. Chaffee on Apollo 1, which was to have been the first manned Apollo flight. His fellow crewmen were backup Command Pilot James McDivitt and Senior Pilot David Scott, both veterans of Project Gemini. In December 1966, this crew was promoted to fly the first manned Earth orbital test of the Apollo Lunar Module (LM), with Schweickart as Lunar Module Pilot.

This mission was finally flown as Apollo 9 in March 1969. Schweickart spent just over 241 hours in space, and performed the first extravehicular activity (EVA) of the Apollo program, testing the Portable Life Support System that was later used by the 12 astronauts who walked on the Moon. The flight plan called for him to demonstrate an emergency transfer from the Lunar Module to the Command Module (CM) using handrails on the LM, but he began to suffer from space sickness on the first day in orbit, forcing the postponement of the EVA. Eventually he improved enough to perform a relatively brief EVA with his feet restrained on the LM "porch" (a platform used in transferring to the descent ladder), while Command Module Pilot Scott performed a stand-up EVA through the open hatch of the CM.

The time Schweickart spent after this space mission studying space sickness contributed to his missing assignments on the Apollo lunar missions. Schweickart instead served as backup commander for the first Skylab space station mission, which flew during the spring of 1973. Following the loss of the space station's thermal shield during launch, he assumed responsibility for the development of hardware and procedures for erecting an emergency solar shade and deploying a jammed solar array wing, operations which saved the space station.

Schweickart has spoken and taught at the Esalen Institute. Schweickart is also the co-founder and Chairman of the Board of the B612 Foundation, a group that aims to defend Earth from asteroid impacts.

In the 1998 miniseries From the Earth to the Moon, Schweickart is portrayed by Kieran Mulroney.

Schweickart appeared in the television series The Universe in the episodes "The End of the Earth: Deep Space Threats to Our Planet" and "Stopping Armageddon".

In May 2005 Schweickart told the U.S. Congress that a space flight to attach a transponder onto the asteroid 99942 Apophis (formerly named 2004 MN4) should be a high priority. Some astronomers estimated that this asteroid has a chance of about one in 6000 of striking the Earth in the 21st century. Later data indicate that the chance of Apophis hitting the Earth is about one in 45,000 in the year 2036.

Schweickart approved the story of his life and career that appeared in the book In the Shadow of the Moon in 2007.

In 2010, Schweickart served as the co-chairman of the NASA Advisory Council Ad Hoc Task Force on Planetary Defense.

Schweickart, along with cosmonauts Alexey Leonov, Vitaly Sevastyanov, and Georgi Grechko, established the Association of Space Explorers in 1984. Membership is open to all people who have flown in outer space.