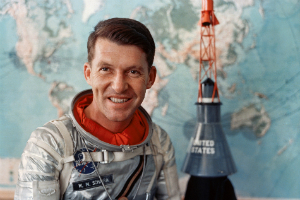 Walter Marty Schirra, Jr. (March 12, 1923 – May 3, 2007) was an American test pilot, United States Navy officer, and one of the original Mercury Seven astronauts chosen for the Project Mercury, America's first effort to put humans in space. He is the only person to fly in all of America's first three space programs (Mercury, Gemini and Apollo). He logged a total of 295 hours and 15 minutes in space.

Schirra was the fifth American and the ninth human to ride a rocket into space. He was the first person to go into space three times.

Schirra was born in Hackensack, New Jersey, to an aviation family of Sardinian origin. Schirra's father, Walter M. Schirra, Sr., who was born in Philadelphia, went to Canada during World War I and earned his pilot rating. He later became a barnstormer. Schirra's mother, Florence Leach Schirra, went along on her husband's barnstorming tours and performed wing walking stunts. By the time he was 15, Wally was flying his father's airplane.

Schirra was a Boy Scout and earned the rank of First Class in Troop 36 in Oradell, New Jersey.

Schirra graduated from Dwight Morrow High School in Englewood, New Jersey in 1940 and attended the Newark College of Engineering, where he was a member of Sigma Pi Fraternity, Alpha Mu Chapter. He was later appointed to the United States Naval Academy and received a Bachelor of Science degree in aeronautical engineering. He graduated in 1945.

He married the former Josephine Fraser of Seattle, Washington on February 23, 1946; she was the step-daughter of Admiral James L. Holloway, Jr.. They had two children: Walter M. Schirra, III, born June 23, 1950 and Suzanne, born September 29, 1957.

He attended the United States Naval Academy from 1942 and graduated in 1945. He was commissioned as an officer in the United States Navy, serving the final months of World War II aboard the large armored battle cruiser USS Alaska. After the war ended, he trained as a pilot at Naval Air Station Pensacola, Florida and joined a carrier fighter squadron. He was the second Naval Aviator to log 1,000 hours in jet aircraft.

Upon the outbreak of the Korean War, Schirra was dispatched to South Korea as an exchange pilot on loan to the U.S. Air Force. He served as a flight leader with the 136th Fighter Bomber Wing, and then as operations officer with the 154th Fighter-Bomber Squadron. He flew 90 combat missions between 1951 and 1952, mostly in F-84s. Schirra was credited with downing one MiG-15 and damaging two others. Schirra received the Distinguished Flying Cross and the Air Medal with an oak leaf cluster for his service in Korea.

After his tour in Korea, Schirra served as a test pilot. He attended the United States Naval Test Pilot School at Naval Air Station Patuxent River, Maryland, graduating in 1958. At China Lake Naval Ordnance Test Station (NOTS) he tested weapons systems such as the Sidewinder missile and the F7U-3 Cutlass jet fighter. During one flight, Schirra fired a Sidewinder missile and the missile "doubled back" and started to chase his jet. Schirra, through skillful flying, avoided the Sidewinder.

After spending time as a flight instructor and carrier based aviator, he later returned to his test pilot duties and helped evaluate the F-4 fighter for Naval service. In the image at left, Schirra is shown taking delivery of a F3H Demon from McDonnell Aircraft Design Chief, Dave Lewis. They remained good friends, later working together on the McDonnell Mercury 7 program.

On April 2, 1959, Schirra was chosen as one of the original seven American astronauts. He entered Project Mercury and was assigned the specialty area involving life support systems.

On December 15, 1965, Schirra flew into space a second time in Gemini 6A with Tom Stafford. During the first launch attempt, the booster rocket unexpectedly shut down seconds after ignition and did not launch. Although mission rules called for the crew to eject from the spacecraft in that situation, Schirra used his pilot's judgement and did not eject, as he had not detected any upwards motion. This turned out to be the correct call for their personal safety. The flight launched successfully three days later, conducting the first manned space rendezvous with astronauts Frank Borman and James Lovell, Jr. in Gemini 7. The two vehicles, however, were not capable of actually docking. Gemini 6 landed in the Atlantic Ocean the next day, while Gemini 7 continued on to a record-setting 14-day mission.

While on the Gemini mission, Schirra attracted notoriety for playing "Jingle Bells" on a four-hole Hohner harmonica he had smuggled on board, and a "Wally Schirra" commemorative model was later produced.

In late 1966, Schirra was assigned to command a three-man Apollo crew with Donn Eisele and Walter Cunningham to make the second manned flight test of the Apollo Command/Service Module some time in 1967, after the first such flight to be made by Gus Grissom, Edward White and Roger Chaffee. But soon after, this second test flight was considered unnecessary, and Schirra's crew was reassigned as Grissom's backup. But in January 1967, Grissom and his crew were killed in a cabin fire during a ground test of Apollo 1.

Schirra's crew was then assigned to the first manned flight, Apollo 7, in the fall of 1968, after safety improvements were made to the Command Module. Schirra, like most of the Mercury and Gemini astronauts, had come to gain a sense of security from the Pad Leader responsible for the spacecraft's launch readiness, an extremely diligent, uncompromising McDonnell Aircraft employee named Guenter Wendt. But since the Apollo contractor was North American Aviation, Wendt was no longer pad leader. After the Apollo 1 accident, Schirra felt so strongly he wanted none other than Wendt as pad leader for his Apollo flight, that he pulled strings with his boss Deke Slayton and North American's launch operations manager Bastian "Buzz" Hello to hire Wendt so he could be Apollo 7 pad leader. Wendt remained pad leader for the remainder of the Apollo and Skylab programs, and stayed on with NASA into the Space Shuttle program before retiring.

Apollo 7 was launched on October 11, 1968, making Schirra the first person to fly in space three times. Schirra, Eisele and Cunningham spent eleven days in Earth orbit, performed space rendezvous exercises with the upper stage of the Saturn 1-B launch vehicle that sent them into space, and provided the first live television pictures publicly broadcast from inside a manned spacecraft, for which Schirra received an Emmy award. (An experimental TV transmission had been made during Gordon Cooper's Mercury flight, which was not broadcast to the public. The Soviet Union may have made television transmissions from their spacecraft, but in keeping with their policy of secrecy and not announcing flights until after the fact, these would not have been broadcast live either.)

During the Apollo 7 mission, Schirra caught what was perhaps the most famous cold in NASA history. He took Actifed to relieve his symptoms upon the advice of the flight surgeon. Schirra soon passed the cold to Eisele, and the crew became known for their grumpy exchanges with Houston. Interaction with ground controllers became so strained that the crew was taken out of rotation for future missions, and none of the three flew for NASA again. Schirra had made the decision to retire before launch, and left the NASA Astronaut Corps after the mission. Years later, he became a spokesman for Actifed and would appear in television commercials advertising the product.

During later Apollo missions he served as a news consultant, often being interviewed by Walter Cronkite on CBS News. He co-anchored the first manned landing on the Moon with Cronkite and Arthur C. Clarke, and continued to co-anchor all the remaining Apollo Moon landing missions, including the ill-fated Apollo 13.

Schirra's logbooks show a total of 4,577 hours flight time (including 295 in space) and 267 carrier landings.

In 1995 Schirra co-authored the book Wildcats to Tomcats: The Tailhook Navy with fellow Navy Captains Richard L. (Zeke) Cormier, and Phil Wood, with Barrett Tillman as the writer. It has a section by each of these Naval Aviators that cover five decades of flight experiences, including combat tours in World War II, Korea & Vietnam.

In 2005 Schirra co-authored the book The Real Space Cowboys with Ed Buckbee. The book is an account of the 'Mercury Seven' astronauts. It follows them through the process of selection for the program, their entire careers, and into retirement. Wernher von Braun, NASA, Space Camp, and the U.S. Space and Rocket Center are given special attention.

Schirra was also a major contributor to the 2007 book, In the Shadow of the Moon, which captured his final published thoughts on his life and career.

Schirra died on May 3, 2007 of a heart attack due to malignant mesothelioma at Scripps Green Hospital (currently The Heart Center at Scripps) in La Jolla, California. A memorial service for Schirra was held on May 22 at Fort Rosecrans National Cemetery in California. The ceremony concluded with a three-volley salute and a flyover by three F/A-18s. Schirra was cremated and his ashes were committed to the sea on February 11, 2008. The burial-at-sea ceremony was held aboard the Nimitz-class aircraft carrier USS Ronald Reagan (CVN-76) and his ashes were released by Cmdr. Lee Axtell, command chaplain aboard.

The USNS Wally Schirra, a Lewis and Clark class dry cargo ship named for Schirra, was christened and launched March 8, 2009.

In 2010 Schirra was inducted into the New Jersey Hall of Fame.

A street and a small park are named after Schirra in Oradell, New Jersey and Upper Dublin, Pennsylvania.

An elementary school in Old Bridge, NJ, is named after Wally Schirra.

Wally Schirra was portrayed by Lance Henriksen in the film The Right Stuff and by Mark Harmon in the miniseries From the Earth to the Moon.

Schirra was mentioned in the second episode of WKRP in Cincinnati. The "Pilot Part 2" episode from 9/25/1978, featured the Station Manager, Arthur Carlson saying that his maid believed Wally Schirra was controlling her mind and she believed she had to store up foods.