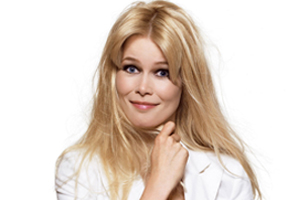 Claudia Schiffer (born 25 August 1970) is a German model and creative director of her own clothing label. Schiffer rose to popularity and became a household name during the early 1990s as one of the world's most successful models. In her early career, she was said to resemble Brigitte Bardot. She appeared on more than 700 magazine covers and continues to front global campaigns for luxury fashion and fragrance houses. In 2002, Forbes estimated her net worth at about US$55 million (£38 million).

Schiffer was born in Rheinberg, North Rhine-Westphalia, West Germany, a small town 15 km northwest of Duisburg. She is the daughter of Gudrun and Heinz Schiffer, a lawyer. She has two brothers, Stefan and Andreas, and one sister, Ann Carolin.

Schiffer said she was popular in high school, but she has revealed that, because she was so tall, she became very shy and did not want to be noticed. She was also subjected to jealousy by others as she came from a wealthy family that was well-known locally. Schiffer is fluent in three languages – German, English and French.

She originally wanted to become a lawyer and used to work in her father's law firm. She later dropped these aspirations when, in October 1987 at 17, she was spotted in a nightclub in Düsseldorf by Michel Levaton, the boss of Metropolitan Model Agency who signed her up to become a model.

Schiffer completed her education and then began to work as a model. She flew out to Paris for a trial photo shoot and soon after she appeared on the cover of French Elle after being well received in Paris. In the early 1990s, she starred in the highly publicised Guess? Jeans campaigns. Paul Marciano said in E! Forbes Top 15 Supermodel Beauties Who Made Bank, "Guess name became really much more known around the world because  Claudia". After several other magazine appearances including the cover of British Vogue shot by Herb Ritts, Schiffer quickly achieved supermodel status and was selected by Karl Lagerfeld to become the new face of Chanel. She went on to become world famous, instantly recognisable with her blue eyes, blonde hair and tall figure, standing at 1.81 m (approx. 5 ft 11 in.).

Schiffer appeared on the November 1999 millennium cover of Vogue as one of the "Modern Muses". Named as one of the most beautiful women in the world, her ability to appeal to a global audience has assured an internationally successful career spanning more than 25 years. Schiffer was the first model to make the covers of Vanity Fair, Rolling Stone, The New York Times and People and has appeared numerous times on covers of Vogue, Harper's Bazaar, Elle, Cosmopolitan and Time. Schiffer has appeared on the catwalk for numerous fashion houses, including Versace, Yves Saint Laurent, Dolce & Gabbana, Chanel and Valentino.

As well as endorsing luxury brands, Schiffer has appeared as the face of high street retailers including Mango and Accessorize, and had her ears pierced for the first time especially for the 2006 Autumn/Winter Accessorize campaign. She has also featured in commercials for Pepsi and Fanta. From her appearances in a 1998 Citroën advertisement she allegedly earned £3 million. Schiffer still holds a contract with L'Oréal and is one of their longest standing ambassadors.

Karl Lagerfeld photographed Schiffer for a Dom Pérignon campaign, around 17 years after her first appearance for Chanel. Schiffer has appeared in recent campaigns for Chanel, YSL, Salvatore Ferragamo and Dolce & Gabbana. Most recently she appeared as the face of the Chanel A/W11 Eyewear Campaign She is signed to a few agencies solely for her modelling interests including d'management group in Milan, 1/One Management in New York City and Marilyns in Paris. Her mother agency is Model Management in Hamburg. Schiffer was a judge on Fashion Fringe in 2011. In 2012, she posed again for Guess black and white ads marking the brand's 30th anniversary.

Schiffer launched her eponymous cashmere collection during Paris Fashion Week in March 2011. The Autumn–Winter 2011 season saw her fashion design debut and has been followed by a Spring–Summer 2012 collection. The collection is sold globally in department stores and high-end boutiques. Schiffer is the creative director of the brand.

Schiffer has appeared in a number of films and music videos. Her first appearance in film was in the children's movie Richie Rich in 1994 and then starred opposite Dennis Hopper and Matthew Modine in The Blackout. She then went onto appear in Friends & Lovers, Black and White in 1999, In Pursuit and Life Without Dick in 2001, and then Love Actually in a semi-cameo role. Schiffer has made other cameo appearances in films including Ben Stiller's Zoolander (2001).

Schiffer has appeared on several talk shows such as The Oprah Winfrey Show, Larry King Live, Late Show with David Letterman, Late Night with Conan O'Brien, and sitcoms Dharma & Greg and Arrested Development. She also appeared for Comic Relief in boyband Westlife's music video for Uptown Girl and in 2000, she made a cameo appearance in Bon Jovi's video for "Say It Isn't So".

With fellow models Christy Turlington, Naomi Campbell, and Elle Macpherson, Schiffer was joint owner of a chain of restaurants called the Fashion Café in 1995. Schiffer remains a prominent figure in German society and helped present and carry the trophy with Pelé during the opening ceremonies at the 2006 World Cup. She also presented Prince William with a polo trophy in 2002.

When talking about the model profession at present, she said: "Supermodels, like we once were, don't exist any more."

Claudia began her involvement with UNICEF by becoming a member of the Arts & Entertainment Support Committee and is currently a UK Goodwill Ambassador for the organisation. Claudia was also a spokesman for Make Poverty History where she appeared in the powerful Click advertisement. In July 2005, she appeared as a presenter at both the Berlin and Edinburgh Live 8 concerts.

Early in her career, Schiffer was romantically linked to a number of celebrities including Bon Jovi guitarist Richie Sambora, Prince Albert of Monaco and singer Peter Gabriel.

Schiffer was engaged to the magician David Copperfield for about five years from 1994 until 1999. They first met in 1993 at one of Copperfield's shows in Germany, where Schiffer was invited on stage to take part in his flying illusion. While they were engaged, Schiffer sometimes appeared on stage with Copperfield to act as his special guest assistant in a number of illusions including being levitated, guillotined and sawn in half. In 1997, Copperfield and Schiffer both sued Paris Match after the magazine claimed their relationship was a stunt, that Schiffer was paid for pretending to be Copperfield's fiancée and that she didn't even like him. In 1999, Schiffer won an undisclosed sum and a retraction from Paris Match when a French court ruled that the magazine's story was false. Copperfield's publicist confirmed that while Schiffer had a contract to appear in the audience at Copperfield's show in Berlin where they met, she was not under contract to be his "consort".

Following her break-up with Copperfield, she had a short relationship with art dealer and Green Shield Stamp heir Tim Jefferies.

Schiffer had two significant problems with harassment in the past. In 2002, an Italian kitchen porter was arrested after making nine visits to Schiffer's £5 million Coldham Hall mansion near Bury St Edmunds, Suffolk, attempting to see her. Charges against him were dropped however, as he was sectioned under the Mental Health Act. He believed that the Pope had told him to marry Schiffer. In 2004, a Canadian man was accused of harassing Schiffer, also at her mansion in Suffolk. He called at her mansion in the hope of seeing her. He also repeatedly left letters at her home.

In 2006, Schiffer and her husband were twice spoken to by policemen from the local Suffolk force after a number of incidents involving their two dogs, an Irish wolfhound and a German shepherd, and local people using the public footpath across the grounds of their Coldham Hall home. These included severely mauling a Jack Russell being walked on the footpath, chasing deer on the estate, intimidating people using the footpath, and biting one of the local postmen.