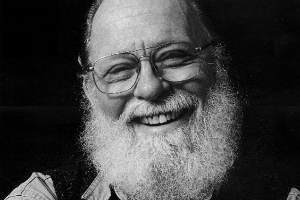 Johann Peter Schickele (born July 17, 1935) is an American composer, musical educator, and parodist, best known for comedy albums featuring music written by Schickele, but which he presents as being composed by the fictional P. D. Q. Bach.

Schickele was born in Ames, Iowa, to Alsatian immigrant parents, and brought up in Washington, D.C., and Fargo, North Dakota, where he studied composition with Sigvald Thompson. He attended Fargo Central High School, graduating in 1952. He then attended Swarthmore College, graduating in 1957 with a degree in music; he was the first student at Swarthmore, and the only student in his class, with a music degree. He graduated from the Juilliard School with an M.S. in musical composition; in the ensuing years he has frequently cited Roy Harris as the most influential of his teachers.

Schickele wrote music for a number of folk musicians, most notably Joan Baez, for whom he also orchestrated and arranged three albums during the mid-1960s, Noël (1966), Joan (1967), and Baptism (1968).

Schickele, an accomplished bassoonist, was also a member of the chamber rock trio Open Window, which wrote and performed music for the 1969 revue Oh! Calcutta!.

The humorous aspect of Schickele's musical career came from his early interest in the music of Spike Jones, whose musical ensemble lampooned popular music in the 1940s and 1950s. While at Juilliard (1959) Schickele teamed with conductor Jorge Mester to present a humorous concert, which became an annual event at the college. In 1965, Schickele moved the concept to Town Hall and invited the public to attend; by 1972, they had become so popular that they were moved to Avery Fisher Hall in Lincoln Center. Vanguard Records released an album of that concert, and P. D. Q. Bach's career was launched.

Besides composing music under his own name, Schickele has developed an elaborate parodic persona built around his studies of the fictional "youngest and the oddest of the twenty-odd children" of Johann Sebastian Bach, P.D.Q. Bach. Among the fictional composer's "forgotten" repertory supposedly "uncovered" by Schickele are such farcical works as The Abduction of Figaro, Canine Cantata: "Wachet Arf!" (S. K9), Good King Kong Looked Out, the Trite Quintet (S. 6 of 1), "O Little Town of Hackensack", A Little Nightmare Music, the cantata Iphigenia in Brooklyn, the Concerto for Horn and Hardart, The Art of The Ground Round (S. $1.19/lb.), Blaues Grasse (The Bluegrass Cantata), and perhaps best known of all, the dramatic oratorio, Oedipus Tex, featuring the "O.K. Chorale". Though P.D.Q. Bach is ostensibly a Baroque composer, Schickele extends his repertoire to parody much more modern works such as Einstein on the Fritz, a parody of his Juilliard classmate Philip Glass.

His fictitious "home establishment," where he reports having tenure as "Very Full Professor Peter Schickele" of "musicolology" and "musical pathology", is the University of Southern North Dakota at Hoople, which is described as "a little-known institution which does not normally welcome out-of-state visitors". To illustrate the work of his uncovered composer, Schickele invented a range of rather unusual instruments. The most complicated of these is the Hardart, a variety of tone-generating devices mounted on the frame of an "automat", a coin-operated food dispenser. The modified automat is used in the Concerto for Horn and Hardart, a play on the name of proprietors Horn & Hardart, who pioneered the North American use of the automat in their restaurants.

Schickele also invented the "dill piccolo" for playing sour notes, the "left-handed sewer flute", the "tromboon" ("a cross between a trombone and a bassoon, having all the disadvantages of both"), the "lasso d'amore", the double-reed slide music stand, which he described as having "a range of major third and even less expressiveness," the "tuba mirum", a flexible tube filled with wine, and the "pastaphone", an uncooked tube of manicotti pasta played as a horn. And then there was the extensively described but (so far as is known) never demonstrated über klavier or super piano, with a keyboard ranging from sounds which only dogs can hear down to sounds which only whales can make. Sample music was provided in P.D.Q.'s unauthorized autobiography, published in 1976. P.D.Q's Pervertimento for Bagpipes, Bicycle and Balloons (1965) demonstrated the inherent musical qualities of everyday objects in ways not equally agreeable to all who listen to them.

To some degree, Schickele's music written as P.D.Q. Bach has overshadowed Schickele's work as a "serious" composer.

For a period of time in the 1970s and early 1980s, performances by Schickele of the works of P.D.Q. Bach often involved guest appearances by the Swarthmore College Choir, often advertised as "fresh from their recent tour of Swarthmore, Pennsylvania."

Schickele has composed more than 100 original works for symphony orchestra, choral groups, chamber ensemble, voice, film (e.g. Silent Running, and an animated adaptation of Where the Wild Things Are, which he also narrated), and television. He has also written music for school bands, as well as a number of musicals, and has organized numerous concert performances as both musical director and performer. Schickele was active on the international and North American concert circuit.

Schickele's musical creations have won him multiple awards. His extensive body of work is marked by a distinctive style which integrates the European classical tradition with an unmistakable American idiom.

In recent years, Schickele has created such not-quite-P.D.Q. Bach albums as Hornsmoke, Sneaky Pete and the Wolf, and The Emperor's New Clothes.

Schickele's music is published by the Theodore Presser Company.

As a musical educator he also hosted the classical music educational radio program Schickele Mix which was broadcast on many public radio stations in the United States. Lack of funding ended the production of new programs in the late 1990s, and rebroadcasts of the existing programs finally ceased in June 2007. Only 119 of the 169 programs were in the rebroadcast rotation, because earlier shows contained American Public Radio production IDs rather than ones crediting Public Radio International. In March 2006, some of the other "lost episodes" were added back to the rotation, with one notable program remnant of the Periodic Table of Musics, listing the names of musicians and composers as mythical element names in a format reminiscent of the Periodic table.

Schickele's two children, Matt and Karla, are both indie rock musicians. The two played together in the indie rock trio Beekeeper in the 1990s. Karla Schickele then joined the band Ida, and has recorded solo music under the name K. Matt Schickele is part of the M Shanghai String Band, and is also an orchestral music composer.