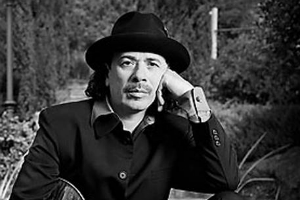 Mexican-American musician, leader of the band "Santana." First formed in 1967 in San Francisco as the "Santana Blues Band," they played local gigs. Virtually unknown before appearing at the 1969 Woodstock Festival, this stunning lead guitarist along with the band captured national prominence for their performance in a segment in the film "Woodstock."

His interest in music began early as a child. One of seven kids, he learned to play the violin at age five from his dad, Jose (who died in 1971), a professional musician. By the time he was nine, he was playing the clarinet, violin and guitar. His family moved to San Francisco in 1962.

Swept up in the hippie culture, he formed the Santana Blues Band, an original fusion of Afro-Latin and rock. Following a triumphant performance at Woodstock in 1969, the band, now known simply as "Santana" signed their first record deal.

The original band members disbanded and new members joined the band from 1971 to 1973, leaving Santana as the only original member of the band. The group continued to record hits into the 1980s.

After 30 years of making great music, Santana still has a sense of wonder and passion, putting out blockbuster concerts in the '90s. On 1/04/2000, he received ten Grammy nominations for his blockbuster commercial album "Supernatural" followed by Best Album honors at the American Music Awards on 1/17/2000. The commercial come-back has put the rock guitar maestro on top of the charts for the first time in 30 years, one of the most surprising come-backs in music history. He made a sweep of the Grammy's on 2/23/2000, leading the Latin pop-wave.

In a Rolling Stones interview, Santana related that an American man who brought him toys and gifts took him across the border and sexually abused him every day or two for about two years, when he was ten to twelve years old. The experience left him with a great deal of anger and it was not until 1995 that he dealt with it in therapy.