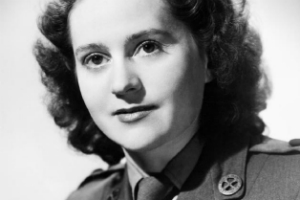 She was born Odette Marie Céline Brailly in Amiens, France, the daughter of the First World War hero, Gaston Brailly, who was killed at Verdun in 1918. At seven, she caught polio, and spent a year blind and another without the movement of her limbs.

She met an Englishman, Roy Sansom, in Boulogne, and married him in 1931, moving with him to England. The couple had three daughters: Françoise, Lily and Marianne. Roy Sansom enlisted in 1940. In the spring of 1942, the Admiralty appealed for postcards or family photographs taken on the Continent for possible war use. Hearing the broadcast, she wrote that she had photographs taken around Boulogne, on the French coast of the English Channel, but she inadvertently addressed her letter to the War Office instead of the Admiralty. As a result, she was enrolled in Special Forces of the First Aid Nursing Yeomanry (FANY) and trained by Colonel Maurice Buckmaster's Special Operations Executive to be sent into Nazi-occupied France to work with the French underground. She left her three daughters in a convent school.

She made a landing near Cannes in 1942, where she made contact with her supervisor, Peter Churchill. Using the code name Lise, she brought him funds and acted as his courier. Churchill's operation in France was infiltrated by Hugo Bleicher, an Abwehr counter-intelligence officer, who arrested Odette and Churchill at the Hotel de la Poste in Saint-Jorioz on 16 April 1943 and they were then sent to Fresnes Prison. Although tortured by the Sicherheitsdienst at 84, Avenue Foch in Paris, she stuck to her cover story that Churchill was the nephew of Prime Minister Winston Churchill, and that she was Peter's wife. The hope was that in this way their treatment would be mitigated.

She was condemned to death in June 1943, although a time for execution was not specified, and sent to Ravensbrück concentration camp. She survived the war and testified against the prison guards at a 1946 war crimes trial. Camp commandant Fritz Suhren had brought her with him when he surrendered to the Americans in the hope that her supposed connections to Churchill might allow him to negotiate his way out of execution.

Roy Sansom and Odette's marriage was dissolved in 1946 and she married Peter Churchill in 1947. She was divorced from Churchill in 1956 and married Geoffrey Hallowes in the same year. Hallowes outlived her and died in 2006.

Odette Sansom Hallowes was appointed a Member of the Order of the British Empire (MBE) and was the first of three Second World War FANY members to be awarded the George Cross (gazetted 20 August 1946). She remains the only woman to have received the George Cross whilst alive, all other female GC awards to date being posthumous. She was also appointed a Chevalier de la Légion d'honneur for her work with the French resistance. In later life her mother's home was burgled and Odette's GC was stolen. After a public appeal it was returned with a note saying:

You, Madame, appear to be a dear old lady. God bless you and your children. I thank you for having faith in me. I am not all that bad - it's just circumstances. Your little dog really loves me. I gave him a nice pat and left him a piece of meat - out of fridge. Sincerely yours, A Bad Egg.

On 23 February 2012 the Royal Mail released a stamp featuring Hallowes as part its "Britons of Distinction" series.