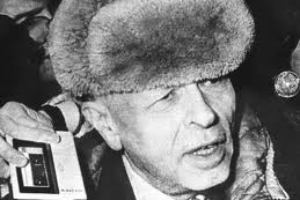 Sakharov entered Moscow State University in 1938. Following evacuation in 1941 during the Great Patriotic War (World War II), he graduated in A?gabat, in today's Turkmenistan. He was then assigned laboratory work in Ulyanovsk. During this period, in 1943, he married Klavdia Alekseyevna Vikhireva, with whom he raised two daughters and a son before she died in 1969. He returned to Moscow in 1945 to study at the Theoretical Department of FIAN (the Physical Institute of the Soviet Academy of Sciences). He received his Ph.D. in 1947. In mid-1948 he participated in the Soviet atomic bomb project under Igor Kurchatov and Igor Tamm. The first Soviet atomic device was tested on 29 August 1949. After moving to Sarov in 1950, Sakharov played a key role in the development of the first megaton-range Soviet hydrogen bomb using a design known as "Sakharov's Third Idea" in Russia and the Teller-Ulam design in the United States. It was first tested as RDS-37 in 1955. A larger variation of the same design which Sakharov worked on was the 50MT Tsar Bomba of October 1961, which was the most powerful nuclear device ever exploded.

Sakharov never felt that by creating nuclear weapons he had "known sin," in Oppenheimer’s expression. He later wrote: "After more than forty years, we have had no third world war, and the balance of nuclear terror ... may have helped to prevent one. But I am not at all sure of this; back then, in those long-gone years, the question didn’t even arise. After 1955 Sakharow begang to think differently about the nuclear weapons. He became aware that each future test would cost 10'000 victims per megaton, due to the long term effects of radioactive fallout during future generations. According to his calculation, already 50 megatons had been tested, resulting in 500'000 deaths. In 1958 he published two papers, “Radioactive Carbon from Nuclear Explosions and Nonthreshold Biological Effects” and “The Radioactive Danger of Nuclear Tests”. The same year Soviet Union announced a temporary moratorium on nuclear tests in the atmosphere. In 1963 the Partial Test Ban Treaty was signed in Moscow.

In May 1968 he completed an essay, "Reflections on Progress, Peaceful Coexistence, and Intellectual Freedom", where the anti-ballistic missile defense is described as a major threat of world nuclear war. After this essay was circulated in samizdat and then published outside the Soviet Union, Sakharov was banned from all military-related research and returned to FIAN to study fundamental theoretical physics. In 1970 he, along with Valery Chalidze and Andrei Tverdokhlebov, was one of the founders of the Committee on Human Rights in the USSR and came under increasing pressure from the government. He married a fellow human rights activist, Yelena Bonner, in 1972.

In 1973 and 1974, the Soviet media campaign targeted both Andrei Sakharov and Aleksandr Solzhenitsyn. While Sakharov disagreed with Solzhenitsyn’s Slavophile vision of Russian revival, he deeply respected him for his courage. Only a few individuals in the Soviet Union dared to defend 'traitors' like Sakharov and Solzhenitsyn, and those who had dared were inevitably punished. He was awarded the Nobel Peace Prize in 1975, although he was not allowed to leave the Soviet Union to collect it. His wife read his speech at the ceremony in Oslo, Norway.

Sakharov was arrested on 22 January 1980, following his public protests against the Soviet intervention in Afghanistan in 1979, and was sent to internal exile in the city of Gorky, now Nizhny Novgorod, a city that was off-limits to foreigners. Between 1980 and 1986, Sakharov was kept under tight Soviet police surveillance. In his memoirs he mentions that their apartment in Gorky was repeatedly subjected to searches and heists.

n May 1984, Sakharov's wife, Yelena Bonner, was detained and Sakharov began a hunger strike, demanding permission for his wife to travel to the United States for heart surgery. He was forcibly hospitalized and force-fed. He was held in isolation for four months. In August 1984 Yelena Bonner was sentenced by a court to five years of exile in Gorky.

In April 1985, Sakharov started a new hunger strike for his wife to travel abroad for medical treatment. He again was taken to a hospital and force-fed. He remained in the hospital until October 1985 when his wife finally was allowed to travel to the United States. She had heart surgery in the United States and returned to Gorky in June 1986. In December 1985, the European Parliament established the Sakharov Prize for Freedom of Thought, to be given annually for outstanding contributions to human rights. On 19 December 1986, Mikhail Gorbachev, who had initiated the policies of perestroika and glasnost, called Sakharov to tell him that he and his wife may return to Moscow.

He helped to initiate the first independent legal political organizations and became prominent in the Soviet Union's growing political opposition. In March 1989, Sakharov was elected to the new parliament, the All-Union Congress of People's Deputies and co-led the democratic opposition, the Inter-Regional Deputies Group.

Soon after 21:00 on 14 December 1989, Sakharov went to his study to take a nap before preparing an important speech he was to deliver the next day in the Congress. His wife went to wake him at 23:00 as he had requested but she found Sakharov dead on the floor. He died of a heart attack at the age of 68.