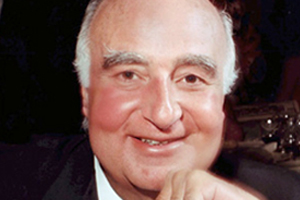 Edmond J. Safra ( August 6, 1932 – December 3, 1999) was a Lebanese Brazilian Jewish banker who continued the family tradition of banking in Lebanon, Brazil and Switzerland. He married Lily Watkins. He died in a fire that attracted wide media interest and was judicially determined to be due to arson.

The Safra family is a Mizrahi Jewish family from Beirut. The Safras were engaged in the financing of trade between Aleppo, Istanbul and Alexandria. His father, Jacob Safra, had opened the J. E. Safra Bank in 1920. By the time he was sixteen, Edmond Safra was working at his father's bank and was engaged in the precious metals and foreign exchange aspects of the business.

In 1949, the family moved to Italy, where he worked for a trading company in Milan. The family moved again in 1952, this time to Brazil, where Edmond Safra and his father founded their first Brazilian financial institution in 1955.

In 1956, Edmond Safra settled in Geneva to set up a private bank, the Trade Development Bank, which grew from an original US$1 million to US$5 billion during the 1980s. He extended his financial empire to satisfy his wealthy clients from around the world. He also founded the Republic National Bank of New York in 1966, and, later, Republic National Bank of New York (Suisse) in Geneva. Republic bank operated 80 branches in the New York area, making it the number three branch network in the metropolitan region behind Citigroup and Chase Manhattan.

The sale of Trade Development Bank to American Express for more than US$450 million in 1983, turned into a legal battle between the two parties. The financier came out on top, winning a public apology from American Express for starting a smear campaign against him and US$8 million in damages, all of which he donated to charities.

By the early 1990s, Safra's fortune was an estimated at US$2.5 billion. He was a major philanthropist during his lifetime, and he left his wealth to the Edmond J. Safra Philanthropic Foundation which supports hundreds of projects in fifty countries around the world in the areas of education, science and medicine, religion, culture and humanitarian assistance.

In 1996 Safra was co-founder of Hermitage Capital Management which became one of the most important investment companies in Russia and later became famous in connection with the Sergei Magnitsky affair.

As he approached his 60s, the financier divided his time between his homes in Monaco, Geneva, and New York and the Villa Leopolda on the French Riviera. Weakened by Parkinson's disease, he required nursing care.

In December 1999, Safra and nurse Vivian Torrente were suffocated by fumes in a fire deliberately lit at the billionaire's Monaco home.

Another nurse, American Ted Maher, who was sharing the night shift with Torrente at the time, was arrested under suspicion of starting the fire, and was convicted of the crime in 2002 by the Monaco Court. He claims that he was attacked by two masked men and, unable to figure out how to trigger the Safra's complex security system, started the fire in an attempt to trigger the system. The prosecution argued he was attempting to carry out a daring rescue, and thus increase his standing in the Safra family's eyes, but lost control of the fire unintentionally.

In a crime that attracted extensive media interest, Safra was killed in a fire that was determined to be arson. Edmond Safra "apparently felt so safe here that he did not have his bodyguards stay the night when he slept in Monaco". Ted Maher, a former Green Beret, who was Safra's bodyguard and nurse, was accused of starting the fire. His lawyer, Michael Griffith, has said that Maher did indeed start the fire in order to gain acceptance from Mr. Safra and that "It was a stupid, most insane thing a human being could do,” says Griffith. “He did not intend to kill Mr. Safra. He just wanted Mr. Safra to appreciate him more. He loved Mr. Safra. This was the best job of his life.”

] Safra left 50% of his assets to several charities.  The details of Safra's death were discussed by media outlets including 60 Minutes, CBS 48 Hours, Dateline NBC and Dominick Dunne in Vanity Fair.

Safra supported educational, religious, medical, cultural, and humanitarian causes and organizations around the world, and the Edmond J. Safra Philanthropic Foundation carries on this work today in his memory.

Committed to his Jewish faith, he believed that constructing and renovating synagogues was important in places where there was a potential for a Jewish community to flourish, and synagogues around the world bearing his father’s name testify to this commitment. Many of these were built in the world’s major Jewish centers, but he also helped to build synagogues in more remote communities such as Manila and Kinshasa.

500 years after the last synagogue was built in Madrid he constructed a new one. He also helped to renovate and enlarge synagogues in Amsterdam, Istanbul, Naples, Budapest, Rhodes, and Vienna. He saved the oldest synagogue in France, Clermont-Ferrand, from destruction by buying it for the community, and he contributed to the expansion of the Cannes synagogue and Synagogue Beth El in Paris. He also helped refurbish synagogues in many small French cities including Evian, Annemasse, and others. Among the synagogues is the Edmond J. Safra Synagogue in New York City.

In addition to supporting a number of synagogues in Israel, the tombs of Rabbi Meir Baal Haness and Rabbi Shimon Bar Yohai were especially important to him, and he was a generous supporter of these pilgrimage sites. For many years on Shavuot eve, the anniversary of his father’s death, he would pray at the tomb of Rabbi Meir until dawn.

During his lifetime Safra donated millions of dollars to provide treatment for the sick. Hospitals across the globe – the Hôpital Cantonal de Genève, the Hôpitaux de France, and countless institutions in the United States, for example – benefited from his generosity. He was one of the founders of Albert Einstein Hospital in São Paulo, today one of South America’s major medical centers. In Israel, he initiated the construction of the Edmond and Lily Safra Children’s Hospital at Tel Hashomer.

In the area of medical research, he was a significant supporter of the Institut Pasteur in Paris, the Weizmann Institute in Israel, the Michael J. Fox Foundation for Parkinson's Research and a number of different centers studying specific diseases in France, the United States, and elsewhere around the world. He created the Edmond and Lily Safra Chair in Breast Cancer Research at Tulane University.

Safra believed higher education was essential for every young person in the modern world, even though he himself never attended university. He provided university scholarship funds for tens of thousands of needy students through the International Sephardic Education Foundation (ISEF), an institution he and his wife established in 1977 to support deserving Israeli students.

Safra also helped universities directly, often through the support of chairs and particular programs (such as Judaic Studies). For example, at Harvard University he endowed the Jacob E. Safra Professorship of Jewish History and Sephardic Civilization, and he gave significant funds for the Robert F. Kennedy Visiting Professorship in Latin American Studies. At the University of Pennsylvania’s Wharton School of Business, he created the Jacob E. Safra Professorship of International Banking and the Safra Business Research Center.

He was a significant benefactor of the American University of Beirut, and he was awarded Honorary Doctorates by the Hebrew University of Jerusalem and Yeshiva University (where he established the Jacob E. Safra Institute of Sephardic Studies) for his ongoing support of those institutions.

With respect to younger children’s education, he was especially devoted to schools in the cities where he lived – for example, he founded Ecole Girsa, Geneva’s first and largest Jewish school. He took great pride in founding the Beit Yaacov school in Bat Yam. He was also one of the world’s most significant benefactors of yeshivot (religious schools training young men to be rabbis, Jewish teachers, and judges), assisting numerous institutions worldwide.