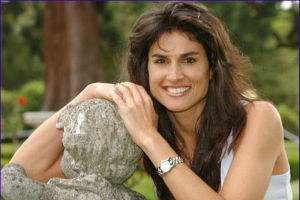 Gabriela Beatriz Sabatini (born 16 May 1970 in Buenos Aires, Argentina) is a former professional Argentine tennis player. She was one of the leading players on the women's circuit in the late-1980s and early-1990s. She won the women's singles title at the US Open in 1990, the women's doubles title at Wimbledon in 1988, two Year-End Championships in 1988 and 1994, and a silver medal at the 1988 Olympic Games.

Sabatini also won most of the highest level regular events on the women's tour, including Miami and Rome (four times), and she scored a total 10 wins over every reigning number one player she faced during her career.

Sabatini first came to the tennis world's attention as a junior. She started playing tennis at the age of 6, and won her first tournament at age 8. In 1983, age 13, she became the youngest player to win the Orange Bowl in Miami, Florida. She won six major international junior titles, including the French Open girls' singles, and was ranked the World No. 1 junior player in 1984.

In 1985, aged 15 years and three weeks, Sabatini became the youngest-ever player to reach the semifinals at the French Open, where she lost to Chris Evert. She won her first top-level singles title later that year in Tokyo.

In 1988, Sabatini reached her first Grand Slam singles final at the US Open. She faced Germany's Steffi Graf, who had won the three previous Grand Slam singles events that year and was looking to win a fourth. Graf won the match 6–3, 3–6, 6–1. Sabatini was selected to represent Argentina in the 1988 Summer Olympics held in Seoul. (She also carried the country's flag in the opening ceremony.) She went on to win the silver medal in the women's singles competition. In the final, she again faced Graf, who was bidding to turn her Grand Slam into what the media had dubbed a "Golden Slam". Graf won 6–3, 6–3. Sabatini teamed-up with Graf to win the women's doubles title at Wimbledon that year. She also won 1988's year-end WTA Tour Championships.

Sabatini had a strong start to 1991, winning five tournaments in the first half of the year. She reached her third Grand Slam singles final at Wimbledon and yet again faced Steffi Graf. Steffi prevailed 6–4, 3–6, 8–6, despite the fact that Sabatini served for the match on more than one occasion. Sabatini came close to attaining the World No. 1 ranking in 1991 but was narrowly denied by Steffi Graf and then by Monica Seles. All three players' rankings were within a few points of each other for much of the year.

Although winning 5 tournaments in 1992, Sabatini failed to reach a Grand Slam Final. At the 1992 Australian Open, Sabatini lost to Mary Joe Fernandez in the semifinals, 6–1, 6–4. Playing fine tennis at the 1992 French Open, Sabatini dropped a tight match against Monica Seles in the semifinals. In the third and decisive set, Sabatini was leading 4–2, but Monica rallied to beat Sabatini 6–3, 4–6, 6–4. At Wimbledon of that year, Sabatini looked to reach a second consecutive Wimbledon Final. And, just as the previous year, Sabatini found Steffi Graf standing in her way, this time in the ladies semifinals. But, unlike their 1991 Championship match, Steffi disposed of Sabatini easily, beating Sabatini 6–3, 6–3. And finally, at the 1992 US Open, Sabatini lost once again to Mary Joe Fernandez in the Quarterfinals, 2–6, 6–1, 4–6.

At the start of the 1993 season, Sabatini continued to advance deep into Grand Slam singles events. At the Australian Open of that year, she reached the semifinals but lost to eventual champion Monica Seles 2–6, 1–6. Later that year, at the French Open, Sabatini was defeated by Mary Joe Fernandez in a Quarterfinal clash. Sabatini had raced out to a commanding 6–1, 5–1 lead and appeared poised for the easy victory. However, Mary Joe saved five match points en route to winning a second set tiebreak. Finally, after 3 and a half hours, Mary Joe eliminated Sabatini by a final score of 1–6, 7–6(7–4), 10–8. Despite the setback at the French Open, Sabatini reached the Quarterfinals at 1993 Wimbledon, facing Jana Novotna, a player she had beaten in 6 consecutive matches. But this time Jana got rid of Sabatini in straight sets 6–4, 6–3. At the 1993 US Open, Sabatini had hoped to end the year on a high note, but she would first have to get past Steffi Graf in the Quarterfinals. In their 4 previous meetings, Steffi had gotten the best of Sabatini, but Sabatini looked to change those recent results. After losing the first set 2–6, Sabatini raised the level of her game in the second set, winning 7–5 to even the match at one set apiece. However, in the third and deciding set, Steffi dismantled Sabatini 6–1 to win the match.

After winning five tournaments in 1992, Sabatini had a 29-month drought in which she failed to win a title. At the 1994 Bausch & Lomb Championships in Amelia Island, Florida, Sabatini reached her first singles final in nearly a year, as she faced Arantxa Sanchez Vicario. It was also a rematch of the 1993 Bausch & Lomb final, where Arantxa disposed of Sabatini 6–2, 5–7, 6–2. Now, one year later, both players were looking to end streaks without a singles title: Sabatini was winless in 32 consecutive tournaments while Arantxa's streak had reached 15 tournaments. This time around Arantxa beat Sabatini in convincing fashion 6–1, 6–4 for the sixth time in their last seven meetings.

Sabatini finally brought her winless streak to an end at the WTA Tour Championships in 1994 and then won her first tournament of 1995 at Sydney (defeating Lindsay Davenport in the final of both events). But that proved to be the last singles title of Sabatini's career. In 1994, the Great American Doll Company created a doll in Sabatini's likeness, dressed in tennis clothes. That same year, Sabatini published a motivational book entitled My Story (ISBN 1-886612-00-5) , providing a look at her background and the inspirations that led her to become a tennis player.

Sabatini retired from the professional tour in 1996, having won 27 singles titles and 14 doubles titles. She reached her highest ranking of World No. 3 in 1989. Her last professional singles match was on October 14, 1996, when she lost to Jennifer Capriati 6–3, 6–4. (Capriati's first loss on the WTA tour was to Sabatini in 1990.) Sabatini played her last professional match on October 19, 1996, in the doubles semifinals in Zürich with Lori McNeil. In 2001 she won the Diamond Konex Award as the most relevant Sportman of the decade in Argentina. Sabatini was inducted into the International Tennis Hall of Fame on July 15, 2006.