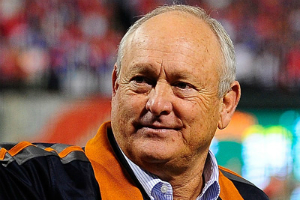 He was scouted by the New York Mets from high school, starting his major league career on 11 September 1966, and traded to the Angels 1972-79, playing with the Houston Astros from 1980. With fierce determination, he had spectacular results. In 1973-75 he pitched four no-hit games and held the major-league record for strikeouts in a season (383).

By the close of his career on 26 September 1993, he had carved out a formidable niche in the annals of baseball, with seven no-hitters, 12 one-hitters and 5,714 strikeouts.

Ryan married in 1967; a son, the first of his three kids, was born in 1972 and he proved himself a strong, honest, caring family man. Shrewdly investing, he accumulated two banks and four ranches to become a multimillionaire. Each year he donates his time and money to various worthy causes.

He is the author of an autobiography, "Miracle Man."