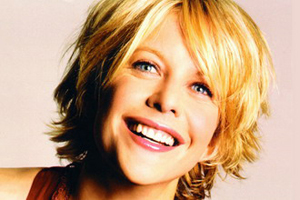 Meg Ryan (born November 19, 1961) is an American actress who specializes in romantic comedies, but has also worked in other film genres.

Born Margaret Mary Emily Hyra in Fairfield, Connecticut to Susan Jordan (née Ryan), a former English teacher, and Harry Hyra, a math teacher, she went by the name Peggy (also her grandmother's nickname) as a child. She has two sisters, Dana and Annie, and a brother, Andrew.

Ryan was raised in the Catholic religion and graduated from Saint Pius X Elementary School in Fairfield, where her mother taught the sixth grade. There, Ryan was confirmed into the Catholic Church, choosing Anne as her confirmation name. Ryan's mother had appeared in one television commercial and later worked briefly as an assistant casting director in New York City.

She supported and encouraged her young daughter's study of acting. At age 18, through her mother's connections, she booked her first television commercial, doing chin-ups and giggling to promote "Tickle" deodorant.

She graduated from Bethel High School in 1979, where she was elected Homecoming Queen. She went on to study journalism at the University of Connecticut and then atNew York University, while acting in television commercials to earn extra money. Her success led her to drop out of college only a semester shy of graduating.

After her first role in a feature film, Rich and Famous (1981), Ryan (then using her screen name) played Betsy Stewart in the daytime drama As the World Turns from 1982 to 1984. Directors for this show especially liked working with her because she could cry on cue. Several TV film and smaller movie roles followed. Ryan guest starred on a showcase skit on The Price is Right in 1983.

Her first full blown hit in a leading role was the romantic comedy When Harry Met Sally... (1989) which paired her with comedic leading man Billy Crystal. Her portrayal of Sally Albright, which earned her a Golden Globe nomination, is particularly memorable for her depiction of a "faked orgasm" in a Manhattan delicatessen (actually shot at the legendary Katz's on E. Houston Street.) The film would be the first of three successful Nora Ephron films in which Ryan would be typecast as a bubbly, feisty, but incurable romantic.

She had much success with her on-screen pairing with Tom Hanks; some compared their chemistry to Katharine Hepburn and Spencer Tracy. They starred in three films together: Joe Versus the Volcano, Sleepless In Seattle and their last, 1998's You've Got Mail, which was Ryan's last major box office success for some years to come. Ryan was nominated for a second Golden Globe for her work in Sleepless In Seattle.

She made several attempts to break away from the romantic comedy ingenue stereotype, and garnered some critical acclaim for her work in When a Man Loves a Woman in which she played an alcoholic and Courage Under Fire, portraying a captain in the Gulf War. Many of her films of the 1990s were hits not only in North America, but also abroad. In 1994, Ryan won the Harvard Hasty Pudding Award as "Woman of the Year". That same year, People Magazine dubbed her one of "The 50 most beautiful people in the world". In 2003, she broke away from her usual roles and starred in In the Cut, an erotic crime thriller.

Ryan's most recent project, George Gallo's Homeland Security, was shot in the fall of 2006 in Shreveport, Louisiana. The romantic comedy stars Ryan opposite Antonio Banderas. Ryan is joined by former co-star Tom Hanks's son, Colin, who plays her son in the film. Ryan's next project is a remake of the 1939 classic film The Women, which is slated to begin filming in New York City in March 2007. The $18 million remake of the George Cukor classic is being produced by Mick Jagger and is slated for release in late 2007. Ryan will play the central character, Mary Haines, a wealthy woman who is one of the last to find out that her husband is cheating on her with a shop girl. The leading role was originally made famous by actress Norma Shearer. Anne Hathaway, Lisa Kudrow and Candice Bergen are also slated to star in the remake.