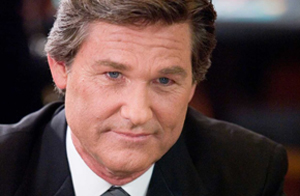 He became known during the late 1970s and 1980s, having starred in several Hollywood films, and has continued appearing in leading roles since, including Escape from New York, Stargate and most recently Grindhouse.

Russell was born in Springfield, Massachusetts to Louise Crone, a dancer, and Bing Russell, a character actor known as Deputy Clem Foster on Bonanza. His grandfather was a professional baseball player. He is the 4th great-grandson of Jason Russell, a Revolutionary War patriot who was killed by the British at the Battle of Menotomy, April 19, 1775. The site of the battle, the Jason Russell House still stands and is a historic site and museum in Arlington, Massachusetts.

Russell started his film career at the age of ten in an uncredited part in Elvis Presley's It Happened at the World's Fair. He played "Ugly Child". At the age of twelve he landed a big part for a juvenile actor: the lead role as the orphan Jaimie in the TV western The Travels of Jaimie McPheeters, the Two-Thumbed Tossbag (1963–1964). Based on a book by Robert Lewis Taylor, this series also starred Dan O'Herlihy, John Maloney, Charles Bronson, and the young Osmond Brothers. The young Russell was soon signed to a ten-year contract with the Walt Disney Company, where he became, according to Robert Osborne, the "studio's top star of the '70s." Russell starred in many Disney films, such as Follow Me, Boys! (1966), The One and Only, Genuine, Original Family Band (1968) with newcomer Goldie Hawn, The Computer Wore Tennis Shoes (1969), and The Strongest Man in the World (1975).

Russell also had a baseball career (his father also having been a baseball player). In the early 1970s, Russell played second base for the California Angels (now the Los Angeles Angels of Anaheim) Double-A minor league affiliate the El Paso Sun Kings. During a play, he was hit in the shoulder by a player running to second base; the collision tore the rotator cuff in Russell's right/throwing shoulder. Before his injury he was leading the Texas League in hitting with a .563 batting average but the injury forced his retirement from baseball in 1973 and led to his return to acting.

Russel tried out for the role of Han Solo for Star Wars in 1977.

Russell was nominated for an Emmy Award for Outstanding Lead Actor in a Limited Series or a Special (1979) for the made-for-television film Elvis. This would be his first pairing with John Carpenter, the director of Halloween. Over the next decade, Russell would team with Carpenter several times, and help create some of his best-known roles, usually as anti-heroes, including the infamous Snake Plissken of Escape from New York. Among their collaborations was the 1982 John Carpenter's The Thing a remake of The Thing from Another World. In 1986 the two made Big Trouble in Little China, a dark kung-fu comedy in which Russell played a truck driver caught in an ancient Chinese war. The movie, while a flop (much like The Thing), gained a cult audience, and even inspired a few other films, as well as the video game Mortal Kombat.

He was nominated for a Golden Globe Award for Best Performance by an Actor in a Supporting Role in a Motion Picture (1984) for his performance opposite Meryl Streep in Silkwood. His portrayal of Olympic hockey coach Herb Brooks in the film, Miracle, won the praise of critics. "In many ways," wrote Claudia Puig of USA Today, "Miracle belongs to Kurt Russell." Roger Ebert of the Chicago Sun Times wrote, "Russell does real acting here." Elvis Mitchell of the The New York Times wrote, "Mr. Russell's cagey and remote performance gives Miracle its few breezes of fresh, albeit methane-scented, air." (Note: Mitchell's use of the word "remote" here is not a criticism of Russell's acting so much as a description of Russell's portrait of an emotionally reserved man.)

Russell most recently appeared as villain Stuntman Mike in Quentin Tarantino's segment Death Proof, of the film Grindhouse. After a remake of Escape from New York was announced, Russell was reportedly furious over the casting of Gerard Butler for his signature character, Snake Plissken.

Russell married actress Season Hubley, whom he had met on the set of Elvis in 1979 and they had a son, Boston, in 1980. In 1983, in the middle of his divorce from Hubley, Russell re-connected with Goldie Hawn on the set of the film Swing Shift and they have been in a relationship ever since. The couple also filmed the comedy Overboard together in 1987. They had a son, Wyatt, in 1986 and Hawn's daughter with Bill Hudson, Kate Hudson, considers Russell to be her father.

Russell is a prominent member of the United States Libertarian Party. He claims that he was often an outcast in Hollywood because of his Libertarian views so moved to an area outside Aspen, Colorado, where he has tried his hand at writing (he co-wrote the screenplay for Escape from L.A.). In February 2003, Russell and Hawn moved to Vancouver, British Columbia, Canada, so that their son could play hockey. He will be playing for the University of Alabama in Huntsville Chargers starting the fall of 2007.

Russell classes Rangeley, Maine, as his hometown. Russell is an FAA licensed Private Pilot holding single/multi-engine and instrument ratings. He is also a member of the National Rifle Association (NRA)