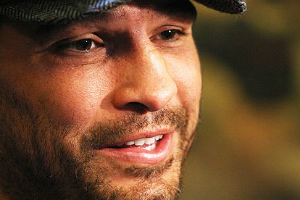 American boxer; the first Latino heavyweight champion of the world, Ruiz captured the title when he won a unanimous decision over Evander Holyfield in Las Vegas on 3/03/2001.

Ruiz and his siblings were named after the Kennedy family: John, Robert, Edward and Jacqueline. Soon after John’s birth, his family moved back to Puerto Rico, but, when John was seven, he returned to the US, settling in Chelsea, MA.

He received the nickname, "the quiet man" when, as he was working out with the U.S. Olympic team in Lake Placid, NY, another fighter described him as "the quiet guy." He made his acting debut in January 2001 on cable TV show, "Resurrection Boulevard" playing himself in a cameo appearance.

Among his many awards and championships, Ruiz captured the gold medal in the light-heavyweight division at the 1991 Olympic Festival in LA; in 1992, he defeated Torsten May of Germany who later that year became the gold medal winner at the Olympics.

On June 16, 1995, he became the World Boxing Council’s International Heavyweight Championship. He lost his world championship to Roy Jones, Jr. in Las Vegas on 3/01/2003. His career record includes an impressive 38 wins, five losses, one draw and 27 knockouts.