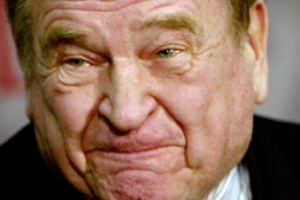 American politician, a veteran of the House for 36 years and the quintessential congressional deal-maker. As a young man he served in the U.S. Army for two years. He completed his education and entered politics, a Chairman in the Appeal Drive in 1958 and Chairman of the Polio Drive, 1961. After one term in the House of Representative, he was elected to the Senate for the first time in 1954. He was the delegate to the Dem. National Convention in 1960. Emerging as a diligent student of tax policy, he was a master of compromise and a hard worker, the Chairman of the House Ways and Means Committee.

In 1992 he was named by Robert Rosa, the House Postmaster as a colleague in embezzlement. Rosa resigned in March 1992 after a plea of guilty of helping various members obtain illegal money from the House post-office. Rosty vowed that he'd "fight these false charges," and refused to plea bargain. Instead, his sentence was tripled when he finally pleaded guilty 4/09/96 to two mail fraud charges, bargained down from an original 17 counts, in a deal that netted him 17 months prison and a fine of $100,000.

In prison, he refused to let his wife and four daughters come see him. He refers to his time behind bars as "my Oxford education." Even while in prison, he continued to instruct his Washington office staff. He was also able to help four fellow inmates, acting as liaison to assist with education and Social Security and Medicare bureaucracy. Released from a half-way house in October 1997, Rostenkowski has since fought a battle with prostate cancer and speaks to public-interest groups of a minimum of a hundred attendees. He still denies charges of cashing in office stamps and there is no real evidence that he was trying to line his own pockets. He claims to have violated some technical rules but says that he did nothing immoral.

Diagnosed with prostate cancer in the 1990s and lung cancer at a later indeterminate date, Rostenkowski died on August 11, 2010 at his home on Lake Benedict, WI.