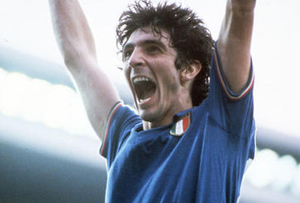 In 1982, he led Italy to the 1982 FIFA World Cup title, scoring six goals to win the Golden Boot/top scorer honors, and the Golden Ball. After his performance at the 1982 FIFA World Cup he became a hero in the hearts of all Italians. Rossi is one of only two players to have won all three honours at a single tournament (the other is the Argentinian Mario Kempes, in 1978). Javier Saviola, Lionel Messi, Sergio Agüero and Dominic Adiyiah accomplished this in junior teams, in the 2001, 2005, 2007 and 2009 FIFA U-20 World Cups respectively. He is listed among Pelé's 125 all-time greatest footballers.

Since retiring, Rossi has gone into sports journalism and punditry. He currently works as a pundit for Juventus Channel.

He made his debut in professional Italian football with Como, to which Juventus had sent him to gain experience after three operations on his knees, as a right wing, where his small build would not be a hindrance.

His career came to a turning point when Vicenza (then Lanerossi Vicenza) engaged him. Coach Fabbri decided to place him in the center of the attack (because of injuries to the then center-forward) just before the season started. Rossi immediately showed a tremendous knack for getting open in the box and scoring, winning the Serie B Golden Boot in his first year at the position. In the 1976–'77 season, Rossi's qualities as an implacable striker led his team to promotion to Serie A. In the following season, Rossi scored 24 goals, to become the first player to top the scoring charts in Serie B and Serie A in consecutive seasons. He was selected by the Italian national football team's manager Enzo Bearzot for the 1978 FIFA World Cup.

Rossi confirmed his growth in the tournament, gaining international fame as one of world's best strikers. Playing for Italy, he would switch positions with the two other strikers a fraction of the time, going to his original right wing position, where he shone as a passer, too. Right wing Causio, a two-footed player, would go left, and tall left wing Bettega would go to the center. This simple stratagem, made possible by the technical quality of all three players, created havoc on opposing defenses, and 1978 Italy showed an entertaining offensive style of play. Rossi totaled three goals and four assists in that WC edition.

Rossi up to this point had been jointly owned by Vicenza and Juventus. When the two clubs were called to settle the property, Lanerossi offered the shocking sum of 2.612 million lire for Rossi, who became Italy's most costly sportsman ever to that date. In 1979 Vicenza was relegated to Serie B, and Rossi was loaned to Perugia.

While at Perugia he was involved in the infamous 1980 betting scandal known in Italy as Totonero, and as a result of this Rossi was disqualified for three years though this was later reduced to a two year ban. However, Rossi always claimed to be innocent and be victim of an injustice. In his book Ho fatto piangere il Brasile (I Made Brazil Cry) one of the people that accused him in 1980 admitted that the accusations against him at that time were invented.

Rossi returned just in time for 1982 FIFA World Cup, but Italian journalists and tifosi lamented he was in very poor shape. This view seemed to be confirmed by Italy's first, appalling three matches, in which he was allegedly described as a ghost aimlessly wandering over the field.

Bearzot, however, staunchly confirmed Rossi for the decisive round robin, in which his team was to face Argentina, the reigning World Champions, and Brazil, the biggest favourites to win the title with a team consisting of world-class players such as Sócrates, Zico, and Falcão. After Italy defeated Argentina 2–1 on the defensive work of Gentile and Scirea, who shut down Diego Maradona, Rossi scored three memorable goals to shock Brazil 3–2 to qualify for the semi finals against Poland, where his two goals again won the match for Italy. In the final against Germany, Rossi scored the first of Italy's three goals on a free-kick assist from Gentile to win the match 3–1, giving his team their third World Cup. With six goals total, he won the tournament's maximo goleador award—the Golden Boot—as well.

Italian fans hung banners proclaiming him "Man of the match". Rossi's accomplishments in Spain gained him the title of European Footballer of the Year and World Player of the Year in 1982.

After 1982 Rossi played with Juventus, winning two Scudetto titles, the Italian Cup (1983), UEFA Cup Winners' Cup (1984), UEFA Super Cup (1984) and the European Cup (1985). After his stint with Juventus, he moved on to a then struggling AC Milan. In Milan he was remembered for his two-goal performance against Internazionale F.C. in a derby. Rossi was also selected to the 1986 World Cup roster for Italy but did not play due to an injury. He ended his career at Hellas Verona in 1987. He is currently involved in real estate, together with his former teammate Giancarlo Salvi.

Rossi scored a total of 20 goals in 48 caps for Italy. Undoubtedly, his most important goal was the winner against Brazil in the 1982 World Cup which completed a famous hat trick and enabled the Azzurri to advance at the expense of the South Americans. Rossi further represented Italy in the 1991 edition of the World Cup of Masters, scoring in the third place play off against Uruguay.

Rossi was named by Pelé as one of the top 125 greatest living footballers in March 2004.[4] Though he lacked the intimidating presence of a typical out-and-out striker, he more than made up for this with his keen sense of opportunism and sharp finishing skills.