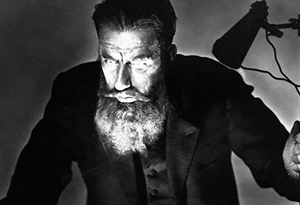 Wilhelm Conrad Röntgen (March 27, 1845 – February 10, 1923) was a German physicist, of the University of Würzburg, who, on November 8, 1895, produced and detected electromagnetic radiation in a wavelength range today known as x-rays or Röntgen rays, an achievement that earned him the first Nobel Prize in Physics in 1901. Source for his time of birth: Steinbrecher.

Röntgen's name is usually given as "Roentgen" (an alternative German spelling) in English; therefore most English scientific and medical references to him are found under this spelling.

The element roentgenium (formerly unununium) was named after him.

Wilhelm Conrad Röntgen was born on March 27, 1845, at Lennep in the Lower Rhine Province of Germany, as the only child of a merchant in, and manufacturer of, cloth. His mother was Charlotte Constanze Frowein of Amsterdam, a member of an old Lennep family which had settled in Amsterdam. He received his early education at the Institute of Martinus Herman van Doorn. In 1862, he attended Utrecht Technical School, from which he was expelled for producing a caricature of one of the teachers, a "crime" he claimed not to have committed.

In 1865, he tried to attend the University of Utrecht without having the necessary credentials required for a regular student. Hearing that he could enter the Federal Polytechnic Institute in Zurich, today the ETH Zurich, by passing its examinations, he began studies there as a student of mechanical engineering. In 1869, he graduated with a Ph.D. from the University of Zurich.

In 1874 Röntgen became a lecturer at Strasbourg University and in 1875 became a professor at the Academy of Agriculture at Hohenheim, Württemberg. In 1876, he returned to Strasbourg as a professor of physics and in 1879, he was appointed to the chair of physics at the University of Giessen. In 1888, he obtained the physics chair at the University of Würzburg, and in 1900 at the University of Munich, by special request of the Bavarian government. Röntgen had family in Iowa in the United States and at one time planned to emigrate. Although he accepted an appointment at Columbia University in New York City and had actually purchased transatlantic tickets, the outbreak of World War I changed his plans and he remained in Munich for the rest of his career.

During 1895 Röntgen was using equipment developed by his colleagues (reputedly, Ivan Pulyui personally presented one (the 'Pulyui lamp') to Röntgen, but Röntgen went on to be credited as the major developer of the technology), Heinrich Hertz, Johann Hittorf, William Crookes, Nikola Tesla, and Philipp von Lenard to explore the effects of high tension electrical discharges in evacuated glass tubes. By late 1895 these investigators were beginning to explore the properties of cathode rays outside the tubes. In early November Röntgen was repeating an experiment with one of Lenard's tubes in which a thin aluminum window had been added to permit the cathode rays to exit the tube but a cardboard covering was added to protect the aluminum from damage by the strong electrostatic field that is necessary to produce the cathode rays. He knew the cardboard covering prevented light from escaping, yet Röntgen observed that the invisible cathode rays caused a fluorescent effect on a small cardboard screen painted with barium platinocyanide when it was placed close to the aluminum window. It occurred to Röntgen that the Hittorf-Crookes tube, which had a much thicker glass wall than the Lenard tube, might also cause this fluorescent effect.

In the late afternoon of November 8, 1895, Röntgen determined to test his idea. He carefully constructed a black cardboard covering similar to the one he had used on the Lenard tube. He covered the Hittorf-Crookes tube with the cardboard and attached electrodes to a Ruhmkorff coil to generate an electrostatic charge. Before setting up the barium platinocyanide screen to test his idea, Röntgen darkened the room to test the opacity of his cardboard cover. As he passed the Ruhmkorff coil charge through the tube, he determined that the cover was light-tight and turned to prepare the next step of the experiment. It was at this point that Röntgen noticed a faint shimmering from a bench a meter away from the tube. To be sure, he tried several more discharges and saw the same shimmering each time. Striking a match, he discovered the shimmering had come from the location of the barium platinocyanide screen he had been intending to use next.

Röntgen speculated that a new kind of ray might be responsible. November 8 was a Friday, so he took advantage of the weekend to repeat his experiments and make his first notes. In the following weeks he ate and slept in his laboratory as he investigated many properties of the new rays he temporarily termed X-rays, using the mathematical designation for something unknown. Although the new rays would eventually come to bear his name in many languages where they became known as Röntgen Rays, he always preferred the term X-rays. Nearly two weeks after his discovery, he took the very first picture using x-rays of his wife's hand, Anna Bertha. When she saw her skeleton she exclaimed "I Have seen my death!"

The idea that Röntgen happened to notice the barium platinocyanide screen misrepresents his investigative powers; he had planned to use the screen in the next step of his experiment and would therefore have made the discovery a few moments later.

At one point while he was investigating the ability of various materials to stop the rays, Röntgen brought a small piece of lead into position while a discharge was occurring. Röntgen thus saw the first radiographic image, his own flickering ghostly skeleton on the barium platinocyanide screen. He later reported that it was at this point that he determined to continue his experiments in secrecy, because he feared for his professional reputation if his observations were in error.

Röntgen's original paper, "On A New Kind Of Rays" (Über eine neue Art von Strahlen), was published 50 days later on December 28, 1895. On January 5, 1896, an Austrian newspaper reported Röntgen's discovery of a new type of radiation. Röntgen was awarded an honorary Doctor of Medicine degree from the University of Würzburg after his discovery. He published a total of 3 papers on X-rays between 1895 and 1897. Today, Röntgen is considered the father of diagnostic radiology, the medical specialty which uses imaging to diagnose disease.

Death
Röntgen died in 1923 of carcinoma of the bowel. It is not believed his carcinoma was a result of his work with ionizing radiation because of the brief time spent on those investigations and because he was one of the few pioneers in the field who used protective lead shields routinely.

Röntgen was nearly bankrupt when he died. In keeping with his will all his personal and scientific correspondence were destroyed upon his death.

Awards
In 1901 Röntgen was awarded the very first Nobel Prize in Physics. The award was officially "in recognition of the extraordinary services he has rendered by the discovery of the remarkable rays subsequently named after him". Röntgen donated the monetary reward from his Nobel Prize to his university. Like Pierre Curie several years later, Röntgen refused to take out patents related to his discovery. He did not even want the rays to be named after him.

Roentgen’s landmarks in Lennep-Remscheid
Today, in Remscheid, 40 kilometers east of Düsseldorf, we can see the house in which Roentgen was born in 1845 and, above all, the Deutsches Röntgen-Museum.