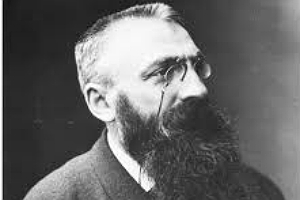 French artist, one of the world's master sculptors whose work influenced countless of other artists in the late nineteenth and early twentieth century. His magnificent pieces included "The Kiss," 1886, "The Thinker," 1888 and "The Burghers of Calais" in 1895.

Originally trained at the Petite Ecole, a school for training artisans, Rodin was refused admission to the more prestigious and established Ecole des Beaux-Arts three times. Rodin used his status as an outsider from the French art establishment to develop his own style of realism and naturalism revolutionizing French sculpture in the process.

By the turn of the century, Rodin was the most celebrated sculptor in France with notoriety in Brussels, London, and Munich. In 1890, he received the Cross of the Legion of Honor. On 12/15/1916, the National Assembly voted to establish the Rodin Museum in the Hotel Biron to house his bronzes, marbles, paintings, drawings and plasters.

Rodin was born in Paris to a Norman father and a mother from Lorraine, France. He went to school in Rouen from 1851-1853. At 14, he entered the Petite Ecole, a school for the decorative arts. After completing his studies in 1858, Rodin produced decorative stonework to earn a living. In 1862, his sister Marie died leaving him devastated. He entered as a novitiate the Society of the Blessed Sacrament, a religious order.

The head of the order encouraged Rodin to return to the secular world and continue his calling as an artist. He studied at the Louvre, Bibliotheque Imperiale, Musee d'Histoire Naturelle, and in the studio of Carrier-Belleuse, a decorative sculptor of the Second Empire. Rodin joined the National Guard for a few months in 1870. The following year, Rodin left the Guard and went to Brussels to work on decorative busts for first time sculpture buyers of the middle-class. For six years, Rodin worked on commissions for building projects and anticipated his return to Paris.

He took a trip to Italy in the winter of 1875-76 to study the Italian Renaissance and find inspiration with Michelangelo's sculptures. Back in Brussels, he worked on his sculpture, "The Age of Bronze" which he exhibited in the Salon of 1877. It was a sensation. Controversy surrounded the anatomical realism of the figure convincing critics that the sculpture was cast from life. Rodin disputed the charge but the publicity generated around the work catapulted the artist into the art establishment.

The biggest event that occurred in Rodin's career was in 1880 with the commission he received from Edmond Turquet, the Undersecretary of State for Fine Arts, to create a sculptural portal for the planned Musee des Arts Decoratifs. He chose the theme of Dante's Inferno for "The Gates of Hell."

By mid-1884, he was ready to give the estimate of the cost of casting "The Gates" in bronze. He continued to work on the project for four more years. By the time he wished to give the first public display of the plaster group in 1900, the plans for the doors had been changed and the Musee des Arts Decoratifs were now housed inside the Louvre. The existing casts were all made after Rodin's death. In "The Gates of Hell" was his famous central figure of Dante who evolved into "The Thinker."

In 1884, he won the commission of the city government of Calais to erect a monument to five prominent citizens of the city during the English siege of Calais in 1347. Rodin ruffled the art establishment when he unveiled his masterpiece "Honore de Balzac" at the Salon of 1898. The public was hostile to the artist's depiction of the French novelist and the statue was rejected by the group which commissioned the work.

At the Paris Universal Exposition of 1900, Rodin held a large retrospective exhibition of his work housed in a pavilion built with his own finances. By this time, he was famous around the world with art exhibitions in other European capitals receiving many honors as one of the greatest artist in his medium.

In 1864, Rodin met Rose Beuret, a seamstress who became his lifelong companion and model. She gave him a son and he married her shortly before his death. Rodin taught his gifted student and lover of almost 15 years, Camille Claudel. She modeled for some of his works.