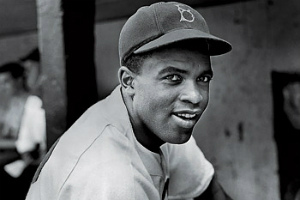 American athlete, a baseball player who first stepped up to the plate to play pro ball as a 28-year-old rookie for the Brooklyn Dodgers in 1947, changing the face of baseball forever and breaking the color barrier in major league sports. Barely noticed at the time, his acceptance into the team began a new era for blacks in sports, as well as in the American work place. He was one of the most significant racial figures in American history. As superb an athlete as ever there was, Robinson had a magnificent body, and, strangely, a high pitched voice.

He had a lifetime batting average of .311 and led the NL with 29 stolen bases in 1947 and 37 in 1949. In 1962, he was elected to the National Baseball Hall of Fame. After Robinson retired, he often spoke out on social issues. Robinson also served his country during WW II, but was slapped in the face when court-martialed for refusing to move to the back of a Texas bus; he was acquitted.

Robinson eventually ended up a nationally respected businessman and civic leader, always displaying grace, courage, and a stubborn dignity. As the son of a south Georgia sharecropper, family was very important to him, as he always held a touching devotion to his wife and family.

Robinson lived to be 53, at which time diabetes and a bad heart stilled the fires. Shortly before his death, his eldest son and namesake was killed in a car accident; he was survived by another son and a daughter.