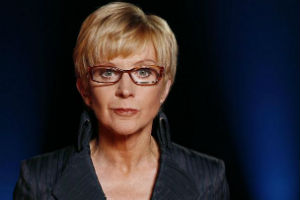 Anne Josephine Robinson (born 26 September 1944) is an English television presenter and journalist, known for her assertive views and acerbic style of presenting. She was one of the presenters on the long-running British series Watchdog from 1993 to 2001, before returning in 2009. She gained notoriety as the hostess of the BBC game show The Weakest Link from 2000 to 2012 which earned her the nickname "Queen of Mean".

Born in Crosby, Lancashire, Robinson is of Irish descent.  Her father was a school teacher. Her mother, Anne Josephine (née Wilson), who was an alcoholic, was an agricultural businesswoman from Ireland, where she was the manager of a market stall. When she came to England, she married into her husband's family of wholesale chicken dealers, and sold rationed rabbit after World War II.Raised initially at the family home in Crosby, Robinson attended a private Roman Catholic convent Boarding School in Hampshire, Farnborough Hill School. She was hired as a chicken gutter and saleswoman during the holidays in the family business, before taking office jobs at a law firm. The family spent their summers on holiday in France, often at the Carlton Hotel in Cannes.

On leaving school, Robinson chose journalism over training for the theatre. After working in a news agency, she arrived in London in 1967 as the first young female trainee on the Daily Mail. Robinson's mother's going-away present to her daughter was an MG sportscar and a fur coat.Robinson secured a permanent position as a result of scooping the details of the story of Brian Epstein's death from being a family friend of the Liverpool solicitor handling the legalities, offering him a ride to Euston station when he could not find an available taxi.

Her work became more uncomfortable for her when she met and fell in love with the deputy news editor, Charlie Wilson, and the two got married in 1968 — he subsequently had to fire her as a result of the marriage. Robinson joined The Sunday Times, and in 1970 the couple had a daughter, Emma Wilson, who is now a British radio disc jockey and has also hosted Scaredy Camp, a game show in the USA on the Nickelodeon network.[citation needed] In 1973, the marriage disintegrated after Robinson, like her mother, became an alcoholic. That same year, both Robinson and Wilson initiated divorce proceedings. In December 1978, she resigned from The Sunday Times and returned home to Crosby to recover from her alcoholism. She then began working for the Liverpool Echo.

Robinson returned to Fleet Street in 1980, working as columnist and Assistant Editor of the Daily Mirror from the week that the Falklands War started.  She also wrote a column under the pseudonym of the "Wednesday Witch," in which she developed her vitriolic style. During her career as a newspaper journalist, she developed a flair for writing tabloid headlines. On 14 November 1982, Robinson attended a formal dinner attended by HM Queen Elizabeth II, at which she noted that Diana, Princess of Wales arrived late.

Robinson asked the Mirror's Royal Editor James Whitaker to investigate, and after conversations with various sources including Diana's sister Lady Sarah McCorquodale, confirmed Diana was suffering from an eating disorder, named as anorexia in a scoop article on 19 November. As a result, Buckingham Palace Press Secretary, Michael Shea, rang then Mirror editor Mike Molloy to remove Robinson. Robinson was subsequently removed from the editorial rota, and was advised by Malloy to "do more television blossom, that's what you're good at." Robinson has written a weekly column for a succession of other British newspapers, such as Today, The Sun, The Express, The Times and The Daily Telegraph.

Robinson began appearing on BBC television in 1982, initially as an occasional panellist on Question Time. From 1986, she began sitting in for regular presenter Barry Took on television viewers show Points of View, taking over permanently in 1988 for 11 years. In 1993, she took over the presentation and writing of consumer affairs television programme Watchdog. She also presented a weekly show on BBC Radio 2 on Saturday mornings, which ran from 1988 to 1993.She returned to the station briefly in 1996, sitting in for Jimmy Young on the Lunchtime slot for two weeks.

Robinson is best known in the UK for hosting the British version of The Weakest Link. Similarly, in the United States she is best known for hosting the NBC primetime version of Weakest Link. She originally started with an icy, mysterious appearance and persona, remaining indifferent to funny and friendly moments throughout; however, that has toned down much over the years, with her often smiling and on occasion laughing, especially on the celebrity episodes. Her usage of insults and caustic remarks as well as personal questions delivered to contestants, has become infamous on The Weakest Link. Her repeated blunt utterance, "You are the weakest link — goodbye!" became a catchphrase soon after the show started in 2000. Her Weakest Link persona has been likened to that of Judge Judy.  Though comparable to Simon Cowell of the UK's Pop Idol and American Idol in the US, Robinson is disliked by Cowell, who commented in an interview "I hate her and I hate her show because it's just an act." Asked by the Duke of Edinburgh to present some Duke of Edinburgh's Awards, she agreed subject to his taking part in the Weakest Link – the Duke declined. In 2005, she made an appearance on The Oprah Winfrey Show, admitting she had been an unfit mother.

Also in 2005, she appeared on an episode of the revived Doctor Who entitled Bad Wolf, voicing a futuristic android version of herself fittingly named the "Anne Droid", hosting a lethal version of The Weakest Link in the year 200,100 where those voted the weakest link are disintegrated into dust. Robinson hosted the BBC's outtakes programme Outtake TV until 2009. She currently hosts a satirical news-based chat show on BBC One called What's the Problem? With Anne Robinson, and the BBC's interactive quiz, Test the Nation. In 2006, Robinson was ranked number 46 in the ITV poll of TV's 50 Greatest Stars] She was also voted the second most terrifying celebrity on television in a 2006 Radio Times poll of 3,000 people.

In May 2009, it was announced Robinson would return to present BBC One's long-running consumer show, Watchdog. Robinson finished presenting The Weakest Link in 2012 after spending twelve years as the host of 1,693 shows.

In 1973, Robinson lost a custody battle for her only child, Emma, then aged two. Charles Wilson was granted sole custody, care and control of Emma, who subsequently lived with her father until she left home at 16 for boarding school.An admitted alcoholic, she stopped drinking on 12 December 1978 after picking her daughter up from school and driving to a petrol station to buy a bottle of vodka.

Robinson married journalist John Penrose in 1980. On 30 September 2007, the couple announced that they were planning to divorce, citing "irreconcilable differences" In 2001, she published her autobiography, Memoirs of an Unfit Mother, in which she describes her former drinking problem. In 2001, Robinson was diagnosed with skin cancer and had surgery to treat it. Robinson has two grandchildren.

Robinson caused a stir when she appeared on the comedy show Room 101 on 5 March 2001. Robinson's comments about Welsh people, such as "What are they for?", "I never did like them", and even suggesting that Prince Philip also disliked them, were perceived as derogatory. This caused an outcry and accusations of racism. After four senior officers from North Wales Police spent 96 hours investigating the issue, she apologised for the comments and agreed to do promotional work for the Wales Tourist Board to encourage people to visit the country . In addition to this, BBC2 show Robot Wars also saw a protest against these remarks by Welsh robot Mega Morg, who placed a picture of Robinson on the front of the robot in the hope it would get destroyed.

In the same show, she put comedian Ben Elton into Room 101 in protest at his hosting the Royal Variety Performance. She argued that he should be sent to the room "for being a total and utter hypocrite and going back on everything he stood for in the '80s and '90s". In April 2002, Robinson was then placed into the Room 101 bin by Jessica Hynes who said she couldn't stand Robinson's bare-faced cheek for insulting people on her show; she then went on to say that Robinson reminded her of a "certain German dictator" who also hated his own people, as well as the black leather outfit, short hair, and moustache. Hynes then had another swipe at Robinson for using Botox, stating that "she's not exactly an oil painting" and that "she looks rather tired".

Ever since that show, host Paul Merton explained that he always took his guests out for lunch to discuss the items in order to ensure they were okay for the show. The one guest that didn't go was Robinson, and as a result, Merton had no idea she wanted to put the Welsh into Room 101. The BBC received 16 complaints after Robinson asked wine connoisseur Olly Smith, who was competing on the celebrity version of The Weakest Link, to feel her breasts, after he described her as a "full-bodied, expensive red". The programme was broadcast Saturday 5 April 2008 on BBC One.Robinson caused controversy on The Weakest Link when she made Blue Peter legend John Noakes cry after asking "What happened to Shep?" Shep had been Noakes's pet both on and off Blue Peter.

Robinson is a vocal supporter of fox hunting and, prior to it being banned in 2004, was a key supporter of the pro-hunt cause. The Guardian claims she has also ridden with the White Horse Foxhunt.  In an interview with Radio Times in September 2000, Robinson was asked what her first act as world leader would be, replying "I'd lock up all the hunt saboteurs because they are destructive. They are campaigning about something of which they know nothing." In February 2002, she hosted a spin-off version of The Weakest Link in Cirencester to raise funds for the local White Horse Hunt. The event was picketed by around 100 protesters from the League Against Cruel Sports, however around 70 animal rights activists returning from another demonstration joined the picket, culminating in a near riot. The event eventually went ahead after Robinson was escorted into the venue by local police.