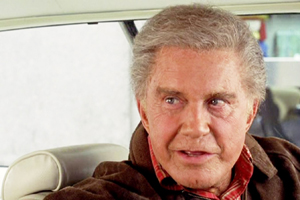 He was the only child of Clifford Parker Robertson, Jr., heir to a southwestern land fortune and Audrey Willingham Robertson. His parents divorced when he was two, his mother dying a few months later of peritonitis. His grandmother, Eleanora, herself a divorcee, adopted Cliff and raised him in La Jolla, CA with occasional visits from his dad. Cliff's dad, a romantic figure, didn't work so Cliff received his old fashioned Presbyterian work ethic from his grandmother. At nine years old he said he was 11 in order to get a job selling magazines. At 13 years he washed airplanes in exchange for flying lessons. Flying since he was 15, he now has a commercial pilot's license and owns the only perfect Spitfire, a vintage World War II airplane, in the world.

After spending two and a half years in the US Maritime Service, in 1947 he entered Antioch College as a journalism major. Moving to New York City, he tailed subjects for a detective agency and parked cars at the Stork Club to finance his studies at the Actors Studio. Always working, he acted on television playing a space cadet in "Rod Brown of the Rocket Rangers" in 1953 and played the lead in "Days of Wine and Roses" in 1958, later being passed over for the part when Jack Lemmon starred in the film. Robertson began his film career in "Picnic" in 1956 and signed a seven-year contract with Columbia Pictures spending much time on suspension for refusing unacceptable roles. One of his most famous roles was John F. Kennedy in "PT 109" in 1963. It is said that Kennedy personally picked Robertson for this role.

Robertson found no work for a period of four years when he blew the whistle on producer David Begelman who cashed a check for $10,000 by forging Robertson's name. This story is told by him in "Indecent Exposure," written in 1977. Due to this blacklisting, to keep busy, Robertson played a villain on TV's "Batman" in the 1960's, wrote, directed, produced and starred in "J. W. Coop" in 1972 and appeared as a regular on "Falcon Crest," making the same salary as Jane Wyman.

Robertson owns a company, Charley II Productions, has done charity work for the National Mental Health Association and helped the Experimental Aircraft Association launch and promote the Young Eagles program. With a distinctive voice and a poll showing he was the most believable man in America, AT&T had Robertson do a series of long distance commercials.

In addition to his Spitfire Robertson owns six other vintage planes. He also has a love of sailing and wants to do things that have never been done before. His motto is "Give $2 of effort for each $1 you are paid." With a high regard for the craft of acting and respect for himself, he no longer feels beholden to anyone.

Robertson was married to Cynthia Stone, ex-wife of Jack Lemmon, from 1957-59. They had a daughter Stephanie in 1959. In 1966 he married actress Dina Merrill, heiress to the Post Cereal and E. F. Hutton fortunes. They had a daughter Heather in 1968. Their marriage lasted 22 years and ended in 1989 after being a long-distance relationship when Dina moved back to Hollywood.