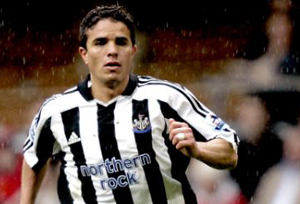 Robert started his career at Montpellier, before signing for Paris Saint-Germain in 1999. He made his debut for France shortly after, on August 18, 1999, against Northern Ireland. In a Champions League match against Rosenborg in 2000 he set up six goals in a 7-2 win. Following a recall to the national team, Robert scored his first goal for France in a match against Turkey on November 15, 2000.

In 2001, he joined English club Newcastle United for a fee of £9.5 million. During his stay at the club, Robert was known for his pace and crossing ability, and was often called upon to take corners and free kicks. He had a tendency to shoot from long ranges in both open play and free kicks (scoring four goals in the 2004-05 campaign, all from set pieces) and has scored from almost 40 yards from goal - his powerful shot has been measured at around 75 mph.

Robert spent several seasons at the club, publicly falling out with Managers Bobby Robson and Graeme Souness. His public criticsm of the latter, as well as the entire Newcastle squad, resulted in Newcastle's desire to offload the troubled winger following the 2004-05 season.

Following his time at Newcastle United and a falling out with the club, Robert moved to fellow Premier League team Portsmouth in June of 2005 in a unique deal which created much confusion within the press at the time. Unsure of whether the move to Portsmouth was on a permanent basis or a temporary loan move, it was later revealed by the two clubs that Robert was signed by Portsmouth on a year-long loan, with two additional years agreed following the completion of the loan. The deal was created in order to expidite Robert's exit from St. James Park, while allowing Portsmouth to protect themselves from Robert's well-documented temprement. It was thought that Portsmouth manager Alain Perrin's French connection with Robert would allow the winger to revive his career on the south coast — this, however, would not occur.

In his time at Portsmouth, Robert scored only one goal, in a 2-1 away loss to West Bromwich Albion, and is most remembered by Portsmouth supporters for his refusal to sit on the bench for the club's 4-1 demolition of Sunderland, storming out of the ground despite the relegation-threatened club's position. The sacking of Perrin and return of manager Harry Redknapp meant a return for the final games of 2005 for Robert, but would shortly be followed by Robert's return to Newcastle after his unsuccessful stint. Newcastle would again look to offload the winger as soon as possible, and a move to Portugal would materialize.

It was not long before he signed a three-and-a-half year contract with Ronald Koeman's Benfica side. Robert said: "This is a super club. To be able to play in the Champions League is fantastic and that's why I am here". He added: "They showed a lot of interest in me. I am very happy to be here."

Robert's first goal in the Portuguese Superliga was, not surprisingly, from a free-kick 40 yards away against arch-rivals FC Porto. A powerful but fairly central free kick was spilled into the net by the usually dependable Vítor Baía. However, his time at Benfica, despite their reputation for quality wingers, did not work out.

Levante
Laurent signed for Spanish La Liga side Levante UD on 11 July 2006 on a free transfer from Benfica. He played thirteen games before the season ended, twelve of those were incomplete (with one red card), scoring no goals.

Derby County
Laurent signed for Derby County on 8 January 2008 and his contract will last until the end of the season. He signed alongside Danny Mills, Robbie Savage, Hossam Ghaly and Emanuel Villa as part of Paul Jewell's attempt to keep Derby in the Premiership.