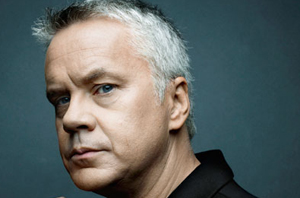 Robbins was born in West Covina, California, to Mary (née Bledsoe), an actress, and Gilbert Robbins, a publishing executive, nightclub owner, musician and folk singer. Robbins has two sisters, Adele and Gabrielle, and a brother, David. Robbins moved to Greenwich Village with his family at a young age while his father pursued a career as a member of the folk music group The Highwaymen. Robbins started doing theater at age twelve and joined the drama club at Stuyvesant High School. He spent two years at SUNY Plattsburgh and then returned to California to study at the UCLA Film School.

Robbins' acting career began at Theater for the New City, where he spent his teenage years in their Annual Summer Street Theater and also played the title role in a musical adaptation of Antoine de Saint-Exupéry's The Little Prince. After graduation from college in 1981, Robbins founded the Actors' Gang, an experimental theater group, in Los Angeles with actor friends from his college softball team. He also took small parts in films, such as the role of frat animal "Mother" in Fraternity Vacation (1985). His breakthrough role was as pitcher "Nuke" LaLoosh in the 1988 baseball movie Bull Durham.

He received critical acclaim for his starring role as an amoral movie executive in Robert Altman's 1992 film The Player. He made his directorial and screenwriting debut with 1992's Bob Roberts, a mockumentary about a right-wing senatorial candidate. Robbins then starred alongside Morgan Freeman in the critically acclaimed The Shawshank Redemption, which was based on Stephen King's short story.

Robbins has written, produced, and directed several films with strong social content, such as the critically acclaimed capital punishment saga Dead Man Walking (film) (1995), starring Sarandon and Sean Penn. The film earned him a Oscar nomination for Best Director. His next directorial effort was 1999's Depression-era musical Cradle Will Rock. Robbins has also appeared in mainstream Hollywood thrillers, such as 1999's Arlington Road (as a terrorist) and 2001's Antitrust (as a malicious computer tycoon). Robbins has also acted in and directed several Actors' Gang theater productions.

Robbins won the Best Supporting Actor Oscar and the SAG Award for his work in Mystic River (2003), as a man traumatized from having been molested as a child. In 2005, he won the 39th annual Man of the Year Pudding Pot Award given by the Hasty Pudding Theatricals of Harvard. His most recent acting roles include a temporarily blind man who is nursed to health by a psychologically wounded young woman in "The Secret Life of Words" and an Apartheid torturer in "Catch a Fire".

In early 2006, Robbins directed an adaptation of George Orwell's novel 1984, written by Michael Gene Sullivan of the Tony Award-winning San Francisco Mime Troupe. The show opened at Actors' Gang, at their new location at The Ivy Substation in Culver City, California. In addition to venues around the United States, it has played in Athens, Greece, the Melbourne International Festival in Australia and the Hong Kong Arts Festival. Robbins is considering adapting the play into a film version.

As of June 2007, Robbins is filming The Return (2007) with co-star Rachel McAdams. Filming is taking place all over Illinois with scenes at Mojo's Music in Edwardsville, Illinois.

Robbins lives in New York City with actress Susan Sarandon, with whom he has been involved since their meeting on the set of Bull Durham in 1988. They have two sons: Jack Henry (born 1989) and Miles Guthrie (born 1992).

Robbins is an avowed supporter of Ralph Nader and appeared on stage in character as Bob Roberts during the "Nader Rocks the Garden" rally at Madison Square Garden during Nader's campaign for president in 2000. Robbins is a prominent spokesperson for anti-globalisation, a frequent critic of U.S. President George W. Bush, and a vocal opponent of the war in Iraq.

In 2003, a 15th anniversary celebration of Bull Durham at the National Baseball Hall of Fame was cancelled by Hall of Fame president Dale Petroskey. Petrovsky, who was on the White House staff during the Reagan administration, said Robbins' public stance against Bush and the war represented 'a danger'. Durham co-star Kevin Costner defended Robbins and Sarandon, saying 'I think Tim and Susan's courage is the type of courage that makes our democracy work... Pulling back this invite is against the whole principle about what we fight for and profess to be about'.

Tim is an avid baseball and hockey fan. He supports the New York Mets and the New York Rangers and frequently attends games. In 1995, Robbins did a series of promos for the MSG network advertising upcoming Rangers games.

After Robbins and Sarandon attended the Academy Awards ceremony in 2003, Robbins threatened to punch Washington Post journalist Lloyd Grove, who had interviewed Sarandon's mother, Leonora Tomalin, a Republican. Tomalin went on record speculating that Sarandon and Robbins had 'brainwashed' her grandson Jack Henry. In his article, Grove quotes Robbins as saying 'if you ever write about my family again, I will fucking find you and I will fucking hurt you'. (Source: Grove, Lloyd, March 25, 2003), "Night of the Livid Celeb", Washington Post, page C01). Sarandon's mother was once quoted as saying that despite her obvious political differences with her daughter, she thinks that 'Susan is a good mother'.