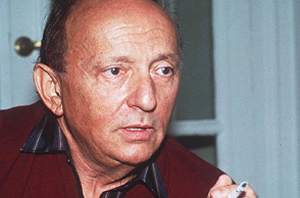 Born as Harold Rubin in New York City, he later claimed to be a Jewish orphan who had been raised in a Catholic boys home. In reality he was the son of well-educated Russian and Polish immigrants. He was reared by his pharmacist father and stepmother in Brooklyn. His first wife was his high school sweetheart
Work

His first book, Never Love a Stranger (1948), caused controversy with its graphic sexuality.

The Dream Merchants (1949) was a novel about the American film industry, from its beginning to the sound era. Again Robbins blended his own experiences, historical facts, melodrama, sex, and action into a fast-moving story.

His 1952 novel, A Stone for Danny Fisher, was adapted into a 1958 motion picture King Creole, which starred Elvis Presley.

He would become arguably the world's bestselling author, publishing over 20 books which were translated into 32 languages and sold over 750 million copies. Among his best-known books is The Carpetbaggers -- loosely based on a composite of Howard Hughes, Bill Lear, Harry Cohn, and Louis B. Mayer -- taking the reader from New York to California, from the prosperity of the aeronautical industry to the glamor of Hollywood. Its sequel, The Raiders, was released in 1995.
Posthumous

Since his death, several new books have been published, written by ghostwriters and based on Robbins's own notes and unfinished stories. On the last couple of books, Junius Podrug has been credited as cowriter. His often profane style was referred to in the film Star Trek IV: The Voyage Home, where Kirk cites his work to explain how people in the 20th century talk.

On Fawlty Towers, Basil Fawlty pours scorn onto his wife Sybil's preference for Robbins' work, describing it as "pornographic Muzak" (as well as "Transatlantic tripe").

From the Hodder & Stoughton 2008 edition of The Carpetbaggers: About the author: Robbins was the playboy of his day and a master of publicity. He was a renowned novelist but tales of his own life contain even more fiction than his books. What is known is that with reported worldwide sales of 750m, Harold Robbins sold more books than J.K. Rowling, earned and spent $50m during his lifetime, and was as much a part of the sexual and social revolution as the pill, Playboy and pot. In March 1965, he had three novels on the British paperback bestseller list - Where Love Has Gone at No.1, The Carpetbaggers at No.3 and The Dream Merchants in the sixth spot.

At the height of his success, Robbins had a mansion in Beverly Hills, a home in the south of France and a house in Acapulco. He owned a fleet of fourteen cars, including a white Rolls-Royce and a number of Jensens, an exquisite art collection (Picasso, Chagall, Legér, Bernard Buffet) and two yachts, one moored in Los Angeles, the other in Cannes.

In 1984, he fell while having a seizure caused from a head contusion, in the process of which he shattered his hip.

Since his passing, his books have continued to sell all over the world. His widow, Jann Robbins, has republished 12 of his most famous titles with AuthorHouse Publishing.
Personal life

He spent a great deal of time on the French Riviera and Monte Carlo until his death on October 14, 1997 from respiratory heart failure at the age of 81 in Palm Springs, California.

He is buried at Forest Lawn Cemetery (Cathedral City) near Palm Springs, California.

Harold Robbins has a star on the Hollywood Walk of Fame at 6743 Hollywood Boulevard.