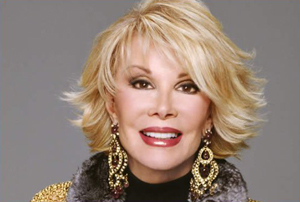 She is known for her brash manner and loud, gruff voice with a heavy metropolitan New York accent. Rivers is the National Chairwoman of the Cystic Fibrosis Foundation and is a board member of God's Love We Deliver. Like the ground-breaking Phyllis Diller, Rivers' act relied heavily on poking fun at herself. A typical Rivers joke about her unattractiveness: "I used to stand by the side of the road with a sign: 'Last girl before freeway.'"

Joan Rivers was born Joan Sandra Molinsky in Brooklyn, New York, to Jewish-American parents Beatrice and Meyer C. Molinsky. She was raised in Westchester County, New York. She attended Connecticut College between 1950 and 1952, and graduated from Barnard College in 1954 with a B.A. in English and anthropology.

In the 1960s Rivers made television appearances as a comedian on the popular shows The Tonight Show and The Ed Sullivan Show, as well as hosting the first of her several talk shows. Later in that decade she made a brief but notable appearance opposite Burt Lancaster in the film, The Swimmer. She was also a regular gag writer and performer on TV's Candid Camera.

In the 1970s, Joan Rivers appeared often as a guest on various television comedy and variety shows. One notable appearance on The Carol Burnett Show had her spoofing Valerie Harper in Rhoda (Rivers' character was named "Rhonda"), to the delight of the audience. From 1972 to 1976, she was the narrator for The Adventures of Letterman, an animated segment for The Electric Company.

In 1978, Rivers directed and wrote the film Rabbit Test starring her friend Billy Crystal. The avant garde movie about a man who gets pregnant bombed at the box office.

Rivers was the opening act for singer Helen Reddy on the Las Vegas Strip during the '70s. She would eventually become a headliner in her own right to standing room crowds continuing into the 1980s. Rivers also recorded a popular record album of her live stand-up act entitled What Becomes a (Semi) Legend Most?

Joan Rivers continued to gain acclaim on television as she would often be brought in as a guest host of The Tonight Show throughout the 1980s.

In 1986, Rivers hosted her own evening talk show, The Late Show Starring Joan Rivers, on the then-fledgling Fox Television Network; her talk show was one of the launch shows for the new network. The show lasted about a year. When it began, Rivers had already become the permanent guest host for Johnny Carson on The Tonight Show. Carson was so upset by her decision to leave without discussing it with him that he banned her from his show, even after Rivers' show failed. Rivers reportedly tried to call Carson on the phone personally. When he answered, she talked to him, but Carson hung up on her. The two never reconciled before his 2005 death.

Soon after the cancellation of her series, Rivers saw a published interview claiming that her husband Edgar Rosenberg, who was a producer on her show, had tried to drive her insane during his illness. According to the interview, she was reported to have commented, "...I think things are just about finished with Edgar" and referred to her former boss at the Fox Network as "Barry (expletive) Diller." Rivers then went public with the news, saying in tears that a "Ben Hacker" had fabricated the story with what she called "vicious lies." A suit was filed against "Hacker."

In 1988, Rivers guest starred on the Pee-Wee's Playhouse Christmas Special, along with other stars, which included Oprah Winfrey, Charo, and Cher. In some sense, it was Rivers way of repaying Paul Reubens (creator of the character Pee-Wee Herman, and the show) who was the very first guest on her talk show when it premiered in 1986.

Not long after this, Rosenberg committed suicide, devastating Rivers. In her book, Bouncing Back, she describes how she developed bulimia and contemplated suicide for herself. Eventually she got better with counselling and the support of her family.

Eventually she returned to television with a daytime talk show of her own, The Joan Rivers Show, which ran from 1989 until 1994. Her enormous stock of bored husband jokes could no longer be used. A Rivers favorite had been: "When Edgar and I were first married, we'd play 'catch me, catch me!' and we'd run around the house. We still play 'catch me, catch me!' but now we walk." She candidly wrote about her husband's death in two autobiographical, motivational best-selling books published in the 1990s: Enter Talking and Still Talking.

Beginning in 1997, Rivers hosted her own radio show on WOR in New York. In 2003, Rivers and the station mutually decided to part ways.

From 2005-2007, Joan Rivers was a host for the TV Guide channel, often co-hosting red carpet specials before awards shows with her daughter, Melissa Rivers, from whom she was estranged briefly after her husband's suicide. She was replaced by Lisa Rinna starting with the 2007 Emmy Awards telecast. She previously worked for the E! Entertainment Television network in a similar role. In the movie Shrek 2, she cameoed as a computer-generated version of herself, hosting the parody ME! Medieval Entertainment Television channel.

When in New York, where she lives, Rivers appears weekly in workshop productions at the small venue The Cutting Room. She donates proceeds to the charities God's Love We Deliver (for which she is a board member) and Guide Dogs for the Blind.

Rivers is an avid and unapologetic user of plastic surgery to enhance her looks, however excessive surgery has caused her appearance to deteriorate to the point that she has become a subject of ridicule . She appeared in two episodes of the show Nip/Tuck during its second and third seasons. During her first appearance, she wanted to find out what she would look like without all the plastic surgery she has had and was horrified by the result. During her second appearance, she wanted to invest in a post-surgical health spa.

She is also an avid collector of jewelry. Rivers also appears regularly on television's The Shopping Channel (in Canada), and QVC (in both the U.S. and the U.K.), selling her own line of jewelery under the brand name "The Joan Rivers Collection," which in fact is one of that network's best-selling lines. Rivers was a guest speaker at the opening of the American Operating Room Nurses' 2000 San Francisco Conference.

Rivers is a grandmother to Edgar Cooper Endicott, who was born in 2000 during her daughter Melissa's brief marriage (1998-2003) to John Endicott.

Whilst touring in the UK, Rivers appeared on BBC Radio 4's Midweek programme and became involved in a heated on-air argument over the issue of race with broadcaster Darcus Howe. See the BBC News Transcript.

Together with Melissa, Rivers appeared in a special feature on the season one DVD set of The Golden Girls, commenting on the sometimes-odd fashion styles worn by the characters in the sitcom.

Both Joan and her daughter Melissa are frequent guests on Howard Stern's radio show.

Joan frequently appears as a panelist on UK game show 8 Out Of 10 Cats.

During an interview with Celebrity Week in October 2006, Rivers remarked that Mel Gibson "is an anti-Semitic son of a bitch. He should (expletive) die!”

She has also insulted Chris Burney, the guitarist in the band Bowling for Soup, calling him "fatso" and renaming his band "Bowling for Crap". Later that year she voted Bowling for Soup the worst dressed musicians. The band took this very seriously and bought an amp saying "fuck you Joan". This has also been mentioned in the Jimmy Kimmel show.

Joan Rivers is a supporter of animal rights and an active member of PETA.

As of April 2007, Joan Rivers has been fired from the Red Carpet on TV Guide. TV Guide chiefs have decided they want a friendlier face greeting the stars and have asked TV actress Lisa Rinna to take over the show.

On The Simpsons episode "Make Room for Lisa," Homer Simpson asks an employee at Kharma-Ceutric, an alternative medicine shop, "What's keeping Joan Rivers alive?" to which she replies, "Fetal shavings".

On August 16, 2007, Rivers began a two-week workshop of her new play, with the working title "The Joan Rivers Theatre Project," at The Magic Theatre in San Francisco.

Joan Rivers has been awarded the 1975 Georgie Award as "Best Comedienne," the Clio Award for "Best Performance in a TV Commercial" in 1976 and 1982, and the 1990 Daytime Emmy Award as "Best Talk Show Host."

In a 2005 Channel 4 poll to find The Comedian's Comedian, she was voted amongst the top 50 comedy acts ever by fellow comedians and comedy insiders.

Joan co-hosted a segment of the Australian 2006 Logie Awards. She was given a specially commissioned pink Logie award. When given the award, Joan threw it over her shoulder and remarked "It's the ugliest award I have ever seen!" Months later (in June), footage of the spectacle was featured in an episode of Web Junk 20.