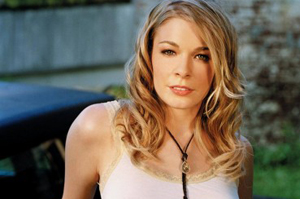 Rimes emerged with the single "Blue" when she was only 13 years old, and by age 24 she had sold over 37 million albums. She has won an American Music Award, two Grammy Awards, three Academy of Country Music Awards, and twelve Billboard Music Awards.

She holds three important records in the music industry, as the current youngest person to win a Grammy and her version of "How Do I Live" is currently the longest charting song on the U.S. Hot 100 at 69 weeks. This was the first multi-platinum country single , selling over 3 million copies.

Guided by her guitar playing mother, Rimes started singing and tap dancing at the age of two. At age six, her family moved to Garland, Texas, and she would later sing "The Star-Spangled Banner" at Dallas Cowboys games and at the National Cutting Horse Championships in Fort Worth. By the age of eleven, she recorded All That at Norman Petty's studio in Clovis, New Mexico.

Later that year, Dallas disc jockey Bill Mack met Rimes and promoted her for a re-release of "Blue", a song he originally wrote in the 1960s. The song was a hit, and at the age of 14, LeAnn Rimes became the youngest person to ever win a Grammy, claiming both Best New Artist and Best Female Country Vocal Performance both in 1997. Her album, Blue, sold more than 8 million copies.

She recorded "How Do I Live" for the 1997 film Con Air. Though her version was rejected by producers in favor of Trisha Yearwood's rendition, it became the first certified multi-platinum country single and holds the record for most weeks spent on the Billboard U.S. Hot 100.

Her third full-length studio project, You Light Up My Life: Inspirational Songs debuted at #1 simultaneously on the Billboard 200, Top Country Albums, and Christan Albums charts. This was followed by several soundtracks singles, including "Can't Fight the Moonlight" for Coyote Ugly, and other recordings for the movies Driven, View from the Top and Legally Blonde 2: Red, White & Blonde.

Notable career setbacks began in the year 2000, when she sued her father for misappropriating more than $7 million of her earnings. In 2002, she publicly denounced the album I Need You, which her record label had assembled from studio outtakes.

Prior to her 21st birthday, in 2003, Rimes released a greatest hits album, simply called LeAnn Rimes Greatest Hits. In 2004, the album was issued internationally under the name The Best of LeAnn Rimes under a new track listing.

On January 25, 2005, Rimes released This Woman. With sales over 600,000, it was her best-selling album in over five years, with "Nothin' 'Bout Love Makes Sense", "Probably Wouldn't Be This Way", and "Something's Gotta Give" all achieving the top 5 on the country charts. "Something's Gotta Give" earned LeAnn her third Grammy nomination for Female Country Vocal Performance.

On June 6, 2006, Rimes released a new pop album in Europe called Whatever We Wanna, led by the single "And It Feels Like". Rimes co-wrote 10 out of the 15 songs on the album. She will be releasing a new Country album to the US on August 28th, 2007 entitled

Rimes has also recorded a duet with Bon Jovi for their next album Lost Highway, called "Until We're Not Strangers" . This follows Bon Jovi's similar success in 2006 when "Who Says You Can't Go Home", a duet with Jennifer Nettles, hit the number one spot on the Hot Country charts.