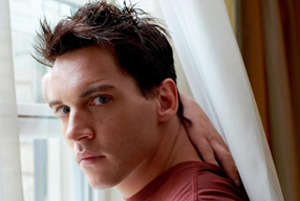 Meyers was born Jonathan Michael Francis O'Keeffe in County Cork, Ireland to Geraldine Meyers and John O'Keeffe. His stage name is derived from his mother's maiden name, Meyers. Rhys Meyers was born with a serious heart problem and was baptised shortly after his birth, as it was feared he would not survive long enough for a traditional baptism ceremony.

He spent the first few months of his life in the hospital. One year after his birth, his family moved to County Cork, Ireland, where they still reside. When Rhys Meyers was three years old, his parents split. He has three younger brothers named Jamie, Alan and Paul. His mother raised him and Alan, while his other two brothers, Jamie and Paul went to live at their grandmothers home with their father.

They would not be in close contact for some years. When Jonathan was a teenager, he befriended an Anglo-Irish gentleman farmer called Christopher (whom he affectionately refers to as his "gay dad"). He was taken in by the farmer and his family and went to live with them in Buttevant.

Rhys Meyers was expelled from school at age 16, and spent much of his time hanging out in pool halls. Casting agents looking for Irish boys to appear in War of the Buttons spotted Rhys Meyers at a Cork pool hall, the Victoria Sporting Club, and invited him to audition. Although he was passed over for War of the Buttons, the casting agents encouraged him to pursue a career in acting. His first film role came soon afterward, in A Man of No Importance (1994). In 1996 he starred in Michael Collins, as Collin's assassin.

Rhys Meyers has starred in television series including Gormenghast (2000) and in the CBS 4-hour mini-series Elvis (2005) as Elvis Presley alongside Rose McGowan as Ann-Margret. The latter earned him an Emmy nomination and a Golden Globe win. His film roles range from a David Bowie-inspired glam rock star in Velvet Goldmine (1998) to a dedicated girls' football coach in Bend It Like Beckham (2002). In 2005, Rhys Meyers starred in Woody Allen's film Match Point, for which he received a Chopard Trophy at the Cannes Film Festival. In 2006, he appeared in Mission: Impossible III. He also scored a role in Vanity Fair (2004) alongside Reese Witherspoon. He leads the cast of the Showtime series The Tudors (2007), where he portrays young Henry VIII. Other projects include August Rush (2007) and "The Children of Huang Shi" (2007). He is in talks to play Branwell Bronte in the movie Bronte (2007), and is rumored to be appearing in Danny Glover's Haitian epic Toussaint (2008).

According to the Internet Movie Database, in 2004, the actor found himself typecast in weak, junkie and androgynous roles. In order to avoid this and attempt to play, as well as be considered for, more masculine and heroic roles, Rhys Meyers underwent a massive fitness regimen. He ended up gaining, and keeping, 25 extra pounds of muscle. He was rumored to have been considered for the role of James Bond, succeeding Pierce Brosnan. However, like similar rumours concerning actors Clive Owen, Hugh Jackman, Ewan McGregor and various other actors, the rumour was unconfirmed. The part eventually went to Daniel Craig.

Aside from his acting skills, Rhys Meyers also has experience as a singer. He did much of his own singing in the role of rock star Brian Slade in Velvet Goldmine, although some of these songs were replaced on the CD release of the soundtrack with alternate tracks by better-known vocalists. Rhys Meyers also sings briefly in the TV miniseries version of The Magnificent Ambersons. His singing voice is also featured in his upcoming film August Rush. With several modeling campaigns in his past, Jonathan was chosen as the "face" for the Versace men's collection of Autumn/Winter 2006 and Spring 2007. He is also the new face of the men's fragrance Hugo by Hugo Boss.

In January of 2007, Rhys Meyers checked into an undisclosed rehab facility seeking treatment for alcohol abuse. On April 24, 2007, the Associated Press reported that Rhys Meyers returned to treatment. The actor's representative Meredith O'Sullivan confirmed the news to People magazine citing his need to take a break from his busy schedule in order to maintain sobriety.