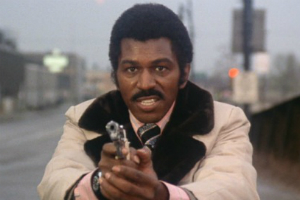 He was sometimes billed as Harry Rhodes and appeared in sixty-six films or television programs, such as ABC's medical drama about psychiatry, Breaking Point. Most of his appearances were in minor roles, according to IMDB.

In a 1968 TV Guide interview, Rhodes described growing up in a rough section of his native Cincinnati: "We lived between the railroad tracks and the river bank. The flood ran us out every winter but we'd always come back, kick out the mud and settle down again until flood time. All the boys had to learn how to hop freights and throw pieces of coal off. All I ever knew was rats, roaches and poverty."

When he was 15, Rhodes spent two months learning to copy his mother's signature and forged it on enlistment papers to join the U.S. Marine Corps.

In the Marines, Rhodes was a member of his camp's judo team for two years. He eventually gained the rank of sergeant and served in Korea, where he led a reconnaissance platoon behind enemy lines.

"The time I got wounded at the Chosan Reservoir, a Chinese came running toward me," Rhodes told TV Guide. "My Thompson submachine gun was unloaded. I threw it down so he wouldn't shoot. His face almost smiled. He had his bayonet on my chest. He began slashing my arms. I got him with an 8-inch knife."

In 1960, Rhodes appeared in five television series: General Electric Theater, hosted by Ronald W. Reagan; The Detectives Starring Robert Taylor, Have Gun, Will Travel, starring Richard Boone, The Westerner, starring Brian Keith, and in two episodes of Adventures in Paradise, starring Gardner McKay. In 1961, he was cast in an episode of ABC's Hawaii-based drama, Follow the Sun. In 1963, he played a patrolman in "Death of a Cop" on CBS's The Alfred Hitchcock Hour

In 1969 Rhodes starred in the short-lived series The Bold Ones: The Protectors. His most notable television role came in 1977 in the ABC miniseries, Roots, in which he was cast as a leader of Kunta Kinte's village. He had a pioneering role as an African-American in science fiction television. His portrayal of a Lt. Travers, member of a lunar exploration team in the "Moonstone" episode of The Outer Limits (1964), pre-dated Nichelle Nichols' portrayal of a black member (Lt. Uhura) of a space exploration crew on Star Trek. His biggest early role was as Mike, the second male lead on the veterinary drama Daktari, which ran on CBS from 1966-1969. He played Mr. MacDonald, who aids Caesar in Conquest of the Planet of the Apes (1972); in 1973 he was the star of the blaxploitation film Detroit 9000. In 1966, he played a supporting role as Captain Davis in the successful suspense-comedy motion piction "Blindfold," starring Rock Hudson and Claudia Cardinale.

Acting, and racism's effect on his writing

Rhodes first television role was in a 1957 episode of Dick Powell's Zane Grey Theater that starred Sammy Davis Jr. The role came just one year after Rhodes had received a rude lesson in racial prejudice.

"I read about a training program a major studio had for grooming people for 'stardom.' Being naive about the system, I got on the phone and called the man in charge and asked if he would interview me, and he told me to come around to the studio," Rhodes told TV Guide in 1968. "I said, 'By the way, I think I should tell you that I am a Negro.' He said, 'Don't waste your time — we don't take Negroes in this program.' I hung up the phone. Almost tore the cradle off the thing."

Rhodes channeled his anger into a novel, A Chosen Few, which was published in a paperback edition. A Chosen Few was described as "an explosive personal portrait of what (Rhodes) saw and lived through in the heart of the American South in the last all-Negro Marine boot camp." The novel's uneducated hero remarks, "Bitterness … is a consuming, cancerous quality out of which comes nothing but self-destruction, while out of an anger can come many constructive things, if nothing more than the drive to get something done."

Rhodes later penned two unpublished novels: Harambee, about a man with a plan to liquidate the world's entire Caucasian population, and Land of Odds, about Hollywood.

Rhodes told TV Guide that writing served as his safety valve. "I'd rather be writing my own than reading somebody else's. I have no need for it." Rhodes said.

Hari Rhodes died of a heart attack in January of 1992, a few months before the premiere of his final project, the made-for-TV feature Murder Without Motive: The Edmund Perry Story.