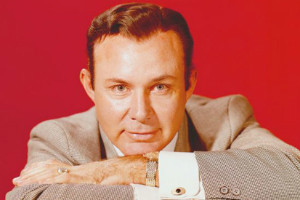 American country western singer, known for his velvety smooth baritone. Commonly referred to as Gentleman Jim Reeves, he traded in the expected cowboy outfit in favor of an upscale suit, helping take country music with his "uptown sound" to a new, urban audience" sound.

Reeves was one of nine children. When he was only ten months old, his father died, leaving his mother to run the farm and provide for the children. With the family barely scraping by, there was no money for the guitar he wanted.

He initially tried to make one, using rubber bands and cigar boxes, but eventually found a broken guitar that he got by trading a bushel of pears. After fixing it, he began playing at community dances, and by the time he was 12, he had appeared on a radio broadcast out of Shreveport, Louisiana.

As a teenager, he decided to use his natural athletic abilities to pursue a career in baseball, and he became one of the top athletes at his high school in Carthage, Texas. He won an athletic scholarship to the University of Texas where he took classes in speech and drama. The U.S. was just getting involved in World War II, so after only six weeks, Reeves dropped out and signed up for military service.

He failed the physical when it revealed enlarged muscles around his heart. After several dead-end jobs, he returned to baseball, playing in the semi-professional leagues before signing a contract with the St. Louis Cardinals in 1944. He played with the Cardinals for the next three years, but a serious ankle injury destroyed his chance for a long-term athletic career.

Having used his guitar to earn extra money for much of his life, Reeves again turned to music for his livelihood. He took a job as a disc jockey and newscaster at a Shreveport radio station, and in late 1952, he filled in on the popular "Louisiana Hayride" show when Hank Williams failed to show up. His performance was enthusiastically received, and he soon had a record contract.

His debut single, "Mexican Joe," climbed to number one on the charts in the spring of 1953, staying at the top for nine weeks. During 1954-55, he had four other hit singles, and in 1955, he joined the Grand Ole Opry. Throughout the remainder of the 1950s and into the early 1960s, Reeves hit one musical home run after another with the release of classics like "Four Walls," 1957, "He’ll Have to Go," 1960, and "I Guess I’m Crazy," 1964. A perfectionist who aggressively controlled every aspect of his career, he was often difficult to work with and demanded a great deal of attention from those around him. The personable, joke-telling, "regular" guy disappeared when he walked into the studio, and the star with the big ego appeared.

Reeves, who wanted to "do it all," learned to pilot small planes so that he would know how to land if it ever became necessary. Piloting a rented one-engine Beechcraft on 7/31/1964, he crashed outside of Nashville during a heavy rainstorm.

The bodies of Reeves and Dean Manuel, a band member, were located two days later, and he was taken to his home state of Texas for burial. Sales of his records increased following his death, and many posthumous singles were released during the late 1960s.

In 1967, he was inducted into the Country Music Hall of Fame, and in 1969, the Jim Reeves Memorial Award was instituted by the Academy of Country Music. More previously unreleased material was released in the 1970s and 1980s, under the direction of his widow Mary, and as a result, his popularity reached almost cult-like proportions in some parts of the world.