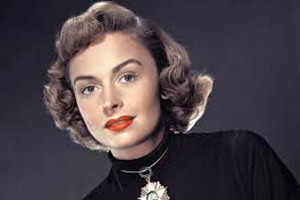 American actor most noted for her long-running TV show, "The Donna Reed Show," and several movies including the ever-popular Christmas movie, "It's a Wonderful Life."

As a lovely young girl, she won a small-town beauty contest and took off for Los Angeles to attend college and to pursue a career in the movies. A college campus queen and actor in college plays, she was spotted by a scout for MGM. In 1941 she had a bit part in the movie, "Babes on Broadway." She made other movies, each one adding to her reputation. Three years later, in 1944, she was only second to the star in "See Here, Private Hargrove." By 1946 she had her breakthrough role starring with Jimmy Stewart in "It's a Wonderful Life." Her sweetness, understanding, and great looks made her perfect for the Hollywood wife roles of the time although she expanded her repertoire in later movies, including playng a prostitute in the 1953 film "From Here to Eternity." She won an Oscar for Best Supporting Role. In 1958 she began a television series, "The Donna Reed Show" which ran for eight years. She then took a break from work and subsequently landed only smaller roles in TV episodes of various shows.

In December 1985 she was hospitalized with a bleeding ulcer and was diagnosed with pancreatic cancer. With over 40 movies to her credit, she died of the disease in Beverly Hills, CA on January 14, 1986, two weeks shy of her 65th birthday.