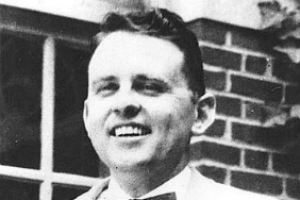 James Reeb (January 1, 1927 – March 11, 1965) was an American Unitarian Universalist minister from Boston, Massachusetts, and a pastor and civil rights activist in Washington, D.C. While marching for civil rights in Selma, Alabama, in 1965, he was beaten severely by white segregationists and died of head injuries two days later in the hospital. He was 38 years old.

Reeb was born on January 1, 1927, to Harry and Mae Reeb in Wichita, Kansas. "He was raised in Kansas and Casper, Wyoming."  "After serving in the Army during World War II, he attended St. Olaf College in Northfield, Minnesota, on the GI Bill and met Marie Deason, who he married on August 20, 1950. The couple would later have four children." He attended Princeton Theological Seminary in Princeton, New Jersey  and ordained a Presbyterian minister after graduation.

As a scholar of theology, Reeb grew away from traditionalist Presbyterian teachings and was drawn to the Unitarian Universalist church. Reeb appreciated the church's emphasis on social action, and he became active in the civil rights movement of the 1950s and 1960s. Beginning in his new ministry, he encouraged parishioners to participate in the movement as well. With his wife and four children, he lived in poor black neighborhoods where he felt he could do the most good. After three years of active service at All Souls Church in Washington, D.C., Reeb was fully ordained as a Unitarian Universalist minister in 1962.

A member of the Southern Christian Leadership Conference (SCLC), Reeb came to Selma to join protests for African American voting rights following the attack by state troopers and sheriff's deputies on nonviolent demonstrators on March 7, 1965. "After eating dinner at an integrated restaurant March 9, Reeb and two other Unitarian ministers Rev. Clark Olsen and Rev. Orloff Miller, were attacked and beaten by white men armed with clubs. Several hours elapsed before Reeb was admitted to a Birmingham hospital where doctors performed brain surgery. While Reeb was on his way to the hospital in Birmingham, Martin Luther King, Jr. addressed a press conference lamenting the ‘‘cowardly’’ attack and asking all to pray for his protection (King, 10 March 1965). Reeb died two days later." His death resulted in a national outcry against the activities of white racists in the Deep South.

Given the many lynchings of blacks in the 20th century, and other violence against activists, some blacks expressed indignation that it took the death of a white man to incite the national outcry against southern violence. When Jimmie Lee Jackson was shot dead by police in Marion, Alabama, two weeks earlier while protecting his mother from a beating, his case attracted less national attention.

"Reeb’s death provoked mourning throughout the country, and tens of thousands held vigils in his honor. President Lyndon B. Johnson called Reeb’s widow and father to express his condolences, and on 15 March he invoked Reeb’s memory when he delivered a draft of the Voting Rights Act to Congress. That same day Martin Luther King Jr. eulogized Reeb at a ceremony at Brown’s Chapel in Selma:

James Reeb, symbolizes the forces of good will in our nation. He demonstrated the conscience of the nation. He was an attorney for the defense of the innocent in the court of world opinion. He was a witness to the truth that men of different races and classes might live, eat, and work together as brothers (King, 15 March 1965).

In April 1965, three white men were indicted for Reeb’s murder; they were acquitted that December. The Voting Rights Act was passed on August 6, 1965.

In July 2007, the Boston Globe reported that the FBI's Cold Case Initiative had reopened the investigation into the 46-year-old case. The renewed investigation was also reported by The Anniston Star and The Clarion-Ledger of Jackson, Miss., in conjunction with the Civil Rights Cold Case Project.

Reeb married Marie Deason on August 20, 1950; they had four children.