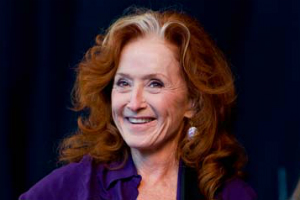 American musician, a guitarist and popular blues singer of the '70s and a top star by the '80s. As the daughter of Broadway leading man John Raitt she was exposed to music from childhood and learned to wield a proficient bottleneck acoustic guitar. A recording artist for Warner's, she tours about ten months a year. A talented interpreter of old fashioned blues, Bonnie is dedicated to songs by obscure songwriters, mostly black and country artists. Her first album was released October 1971; she was a four-time Grammy winner in 1990 and later indicted into the Rock'n'Roll Hall of Fame.

Raised in California, Raitt's musical roots spread to the folk scene, the Mississippi Delta blues and Motown She taught herself guitar at nine after deciding that she could never come up to her mom in piano. Her parents were Quakers of "the Pete Seeger, civil-rights kind," and from the start, she associated playing with political activism.

At Radcliffe in the '60s, Raitt studied African culture, protested the Vietnam War and dreamed of doing social work in Tanzania. The pull of music won as she began performing in coffee houses and hanging out with the old-timers. She dropped out of college to make her first record and made six albums over the next six years.

In the mid-'80s, it was not coming together any more and she hit bottom. Warner label dropped her and she had a bad breakup with her boyfriend. "For a long time, I was this rock'n'roll mama," she said," but as I got older, drugs and alcohol weren't working - they beat you up too much." In 1986 she began psychotherapy and a year later, joined AA. She signed on with Capitol Records in 1988 and put out "Nick of Time" the following year.

Teamed with Michael O'Keefe to write songs for her 1991 album "Luck of the Draw," she married him in 1992. Raitt is deeply involved in the woman's movement, stating that her politics have "basic socialist leanings."

Her father, John Raitt, died on February 20, 2005 of complications from pneumonia.