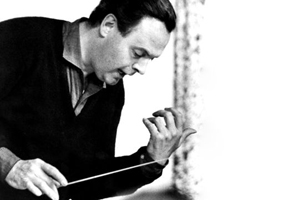 British conductor, one of the most prominent of Britain's post-WW II orchestral icons and an exemplar of the increasingly international scope of the range of skills required in his position. By the 1980s, Sir Pritchard was noted more for his high competence than for electrifying interpretation. His an ever-broadening repertory, focused on four important posts, all of which required considerable attention (Cologne Opera, Belgian Opera Nationale, BBC Symphony Orchestra, and the San Francisco Opera) even as he dealt with guest engagements elsewhere.

Pritchard was born to a family in which music was a constant. His father was a violinist and gave his son his first musical instruction. Later, the youth traveled to Italy to study conducting, viola, and piano (the latter critical to the progress he made from repertoire to orchestra director). He served in WW II, but was released due to poor health.

After resuming his musical activities as conductor of the semi-professional Derby String Orchestra between 1943 and 1945, he was engaged by the 1947 Glyndebourne Festival prior to its July through September performances at the Edinburgh Festival that year. The following year, Pritchard was promoted from coaching duties to chorus master and later, assistant to conductor Fritz Busch.

Pritchard's podium debut came in 1951 when he took over a performance from the ailing Busch. Indeed, Busch's death in September 1951, opened the way to Pritchard's career as a conductor. Within the decade, he was leading almost as many performances as those of Glyndebourne mainstay Vittorio Gui.

In 1952, Glyndebourne gave Pritchard sole responsibility for Mozart's Idomeneo and in 1953, the young conductor enjoyed his first unqualified success with Ariadne auf Naxos, remarkable also for the superb performance of Sena Jurinac. Pritchard's close association with Glyndebourne extended through more than three decades, culminating with his musical directorship from 1969 to 1978.

Meanwhile, Pritchard had undertaken engagements abroad, most notably with the Vienna Staatsoper during the 1951 - 1952 season. Autumn 1952 found him at Covent Garden for his first appearance there, and in 1953, he made his American conducting debut with the Pittsburgh Symphony Orchestra.

From 1957 to 1963, he was music director of the Royal Liverpool Philharmonic, a position which overlapped his directorship of the London Philharmonic Orchestra (1962 - 1966). International tours encompassing several countries included performances in 1966 at the Teatro Colon in Buenos Aires.

In the American city, he was well-liked by musicians and audiences alike. At the time of his death, 12/05/1989 in San Francisco, CA, he was preparing to conduct an integral performance of Wagner's Ring. Pritchard was made a CBE in 1962 and was awarded a knighthood in 1983.